Daniel Su, Durga Borkar, and Philip Storey First Year Vitreoretinal Surgery Fellows Wills Eye Hospital  The residents and fellows presented amazing cases on day 1 of the 2018 Atlantic Coast Retina Club. Not to be outdone, the faculty presentations on Friday were again filled with incredible cases. Below are summaries of several cases that were presented. [caption id="attachment_1676" align="alignnone" width="1632"] 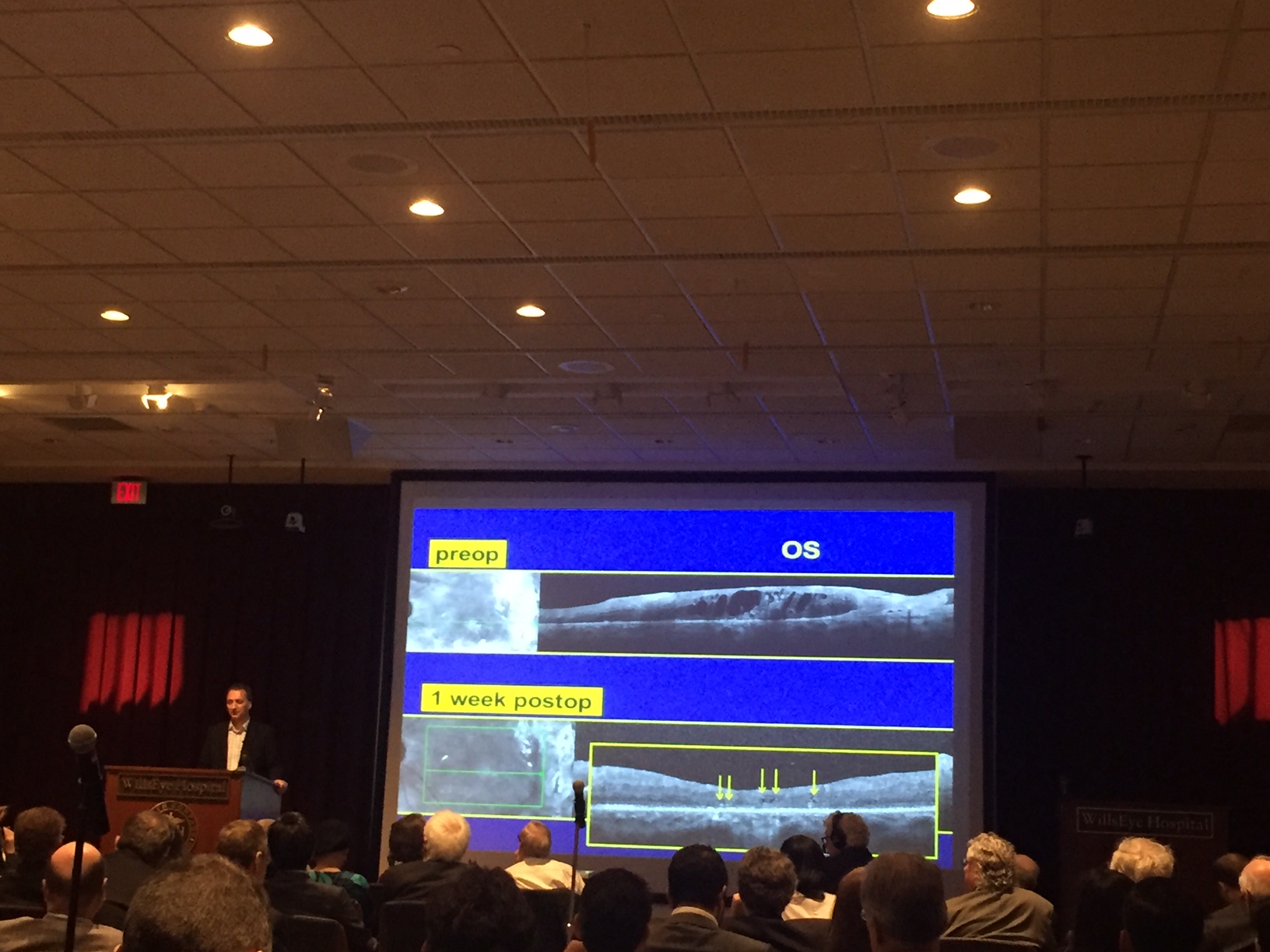 Dean Eliott[/caption] We started the morning with Dean Eliott from Mass Eye and Ear who presented an interesting case of a 58-year-old diabetic man with tractional retinal detachment who underwent vitrectomy/retinectomy/silicone oil insertion with post-operative cystoid macular changes that coincided with silicone oil emulsification. This improved after silicone oil removal with use of a Tano scraper to “squeegee” the retina resulting in expression of the intraretinal oil droplets. The cystoid changes improved significantly postoperatively.  Benjamin Kim from Scheie then presented a case of a 19-year-old man with a history of intravenous drug use and hepatitis C who presented with decreased vision in the left eye for a few weeks. Exam revealed vitritis with vitreous opacities. An infectious workup was initiated as well as treatment with topical steroids/atropine. Blood cultures were negative. However, beta-D-Glucan, which is a blood test for fungal polysaccharide cell wall components, returned highly positive. Follow up vitrectomy with vitreous culture was positive for candida. He emphasized that beta-D-glucan is more sensitive than blood cultures and should be considered when there is high suspicion for fungal endophthalmitis.   [caption id="attachment_1677" align="alignnone" width="1632"] 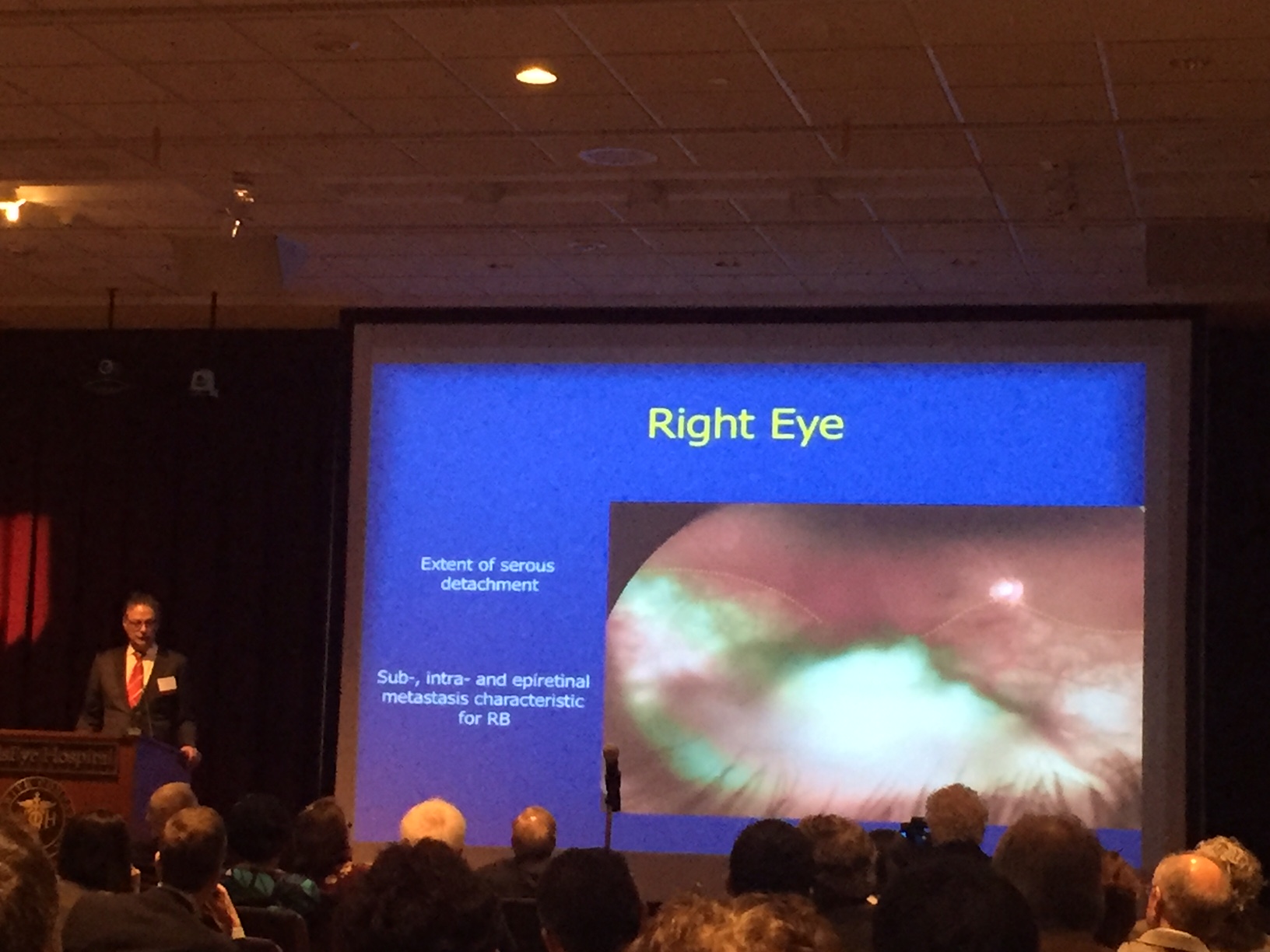 Rick Spaide[/caption] Richard Spaide from Vitreous Retina Macula Consultants then presented a case of a 15-year-old young man who complained of floaters for 9 months. The patient was treated previously with topical steroids for what was thought to be vitritis before being referred to him. Fundus photos revealed a white elevated retinal lesion inferiorly that was consistent with retinoblastoma. The case was unique in the older age of presentation. The patient was treated with intra-arterial chemotherapy with good regression. It was a good lesson to keep retinoblastoma as part of the differential diagnosis even in older children. [caption id="attachment_1678" align="alignnone" width="1632"] 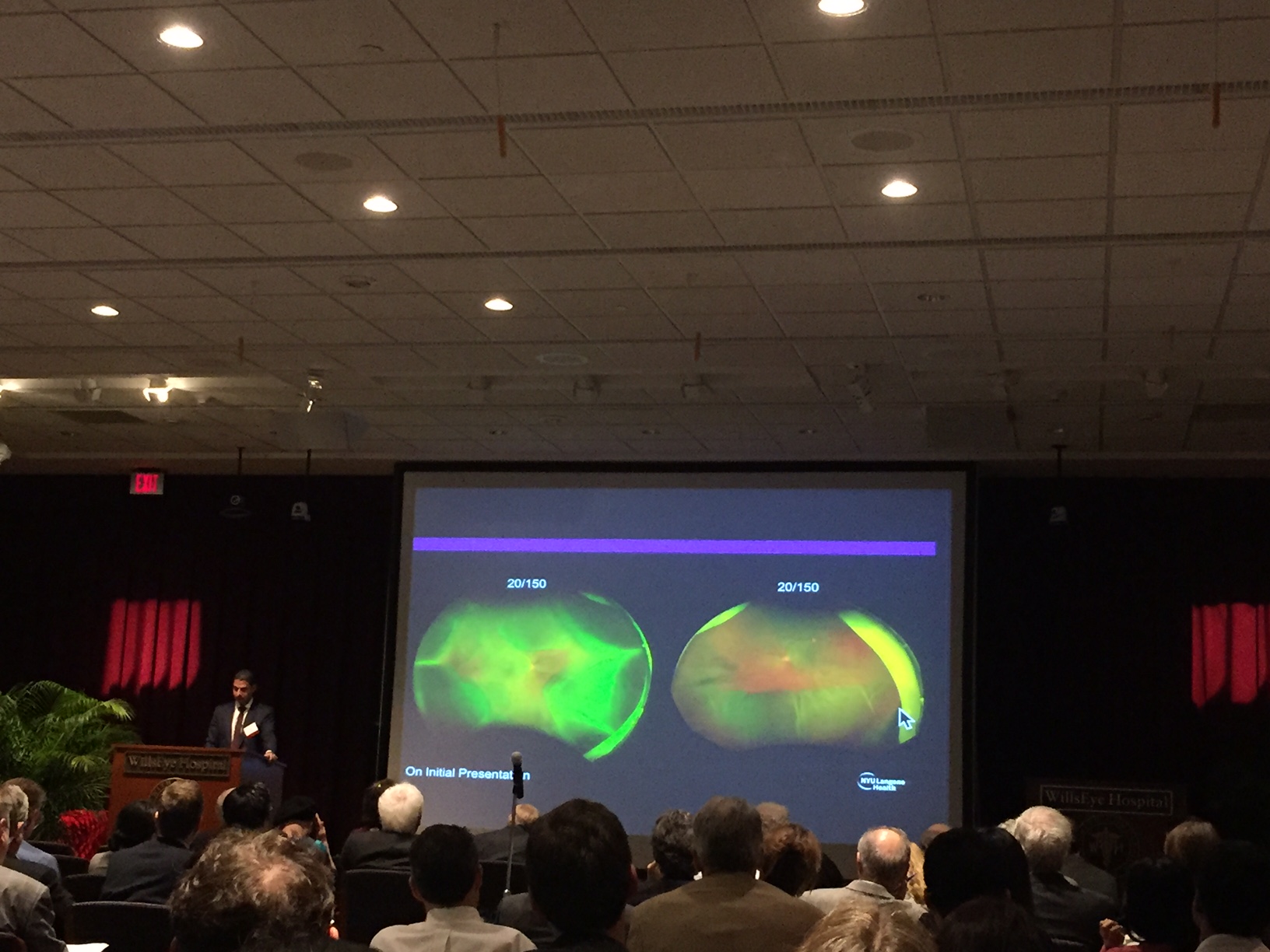 Yasha Modi[/caption] Yasha Modi from NYU then presented the case of a 68-year-old with metastatic cutaneous melanoma, treated with ipilimumab and nivolumab (checkpoint inhibitors) who presented with decreased vision in both eyes. Exam revealed bilateral choroidal detachments with serous retinal detachments. No leakage was seen on widefield fluorescein angiography. This was a checkpoint inhibitor associated side effect. The choroidal and retinal detachments resolved 7 weeks after stopping both medications with improvements in vision. The discussion then centered on whether to stop the medications, or to continue the medications but to treat with steroids. [caption id="attachment_1675" align="alignnone" width="4032"] 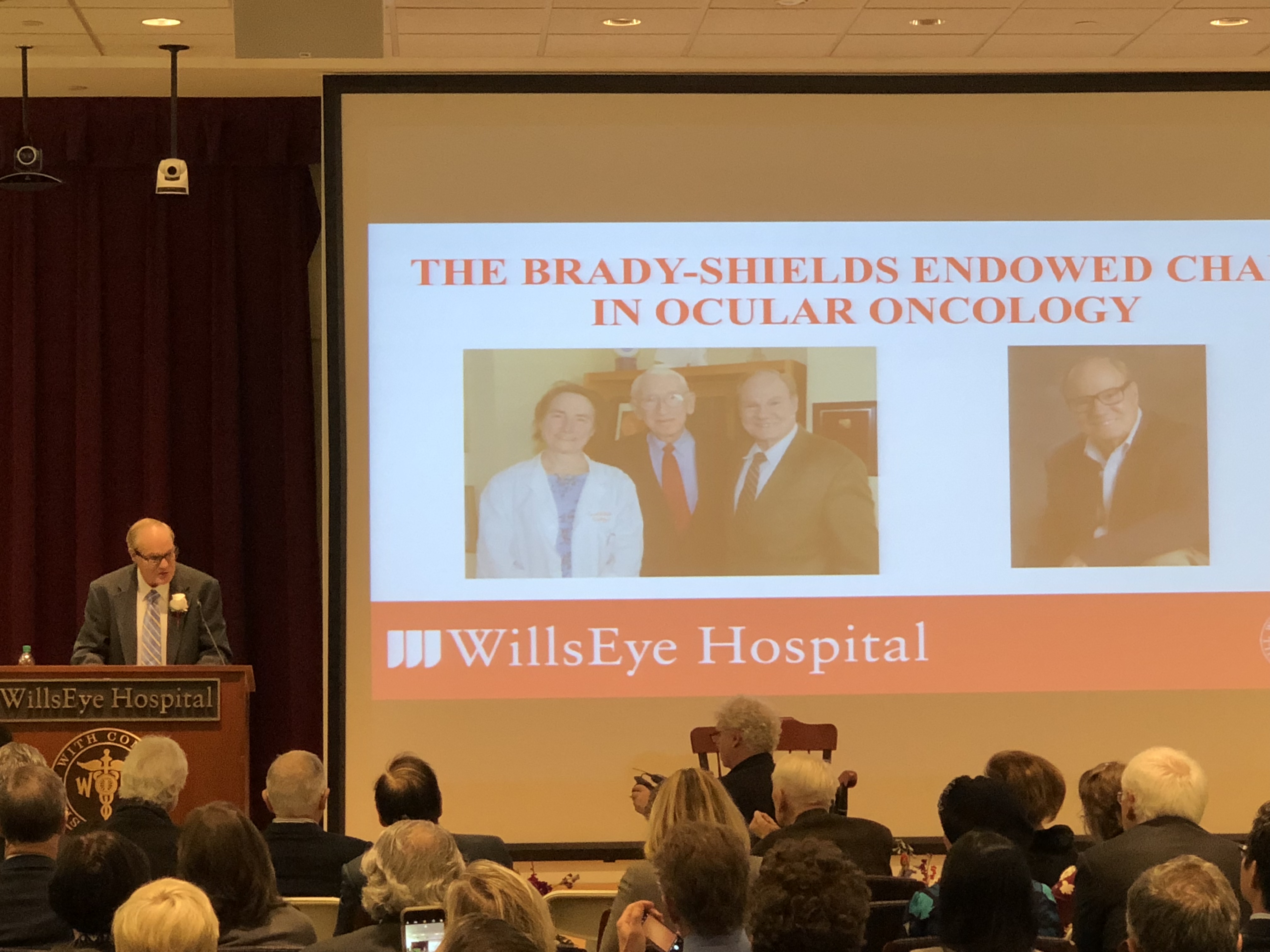 Jerry Shields[/caption] A highlight of the day was the presentation of the Brady-Shields Endowed Chair in Ocular Oncology to Jerry Shields from Wills Eye Hospital for his immense contributions to the field. In the afternoon, Neil Bressler from Wilmer presented a case of a diabetic macular edema with lipid exudation. Anti-VEGF therapy successfully resolved the edema, and after 11 doses, the lipid had cleared leaving a small amount of fibrosis. Over the next year, retinal pigmentation increased substantially where the lipid had been present. Discussion revolved around how the amount of lipid does not appear to affect the final visual acuity in the setting of anti-VEGF treatment for diabetic macular edema. Later in the afternoon, Jasmine Francis from Memorial Sloan-Kettering presented case of a 26-year-old woman with floaters in both eyes and was found to have bilateral intraretinal white lesions, which clinically appeared to be adult retinoblastoma. The patient was treated with systemic chemotherapy but the lesion increased in size in the right eye. Both eyes were then treated with radiation. The presenter then revealed the patient had a history of partially treated B-cell ALL. A biopsy revealed that the lesions were in fact due to the leukemia. The 2 days of the Atlantic Coast Retina Club were packed with amazing educational cases. Please stay tuned for coverage of Macula 2018. Atlantic Coast Retina Club 2018 Links: