Cynthia X. Qian, MD Assistant Professor of Ophthalmology University of Montreal The first day of retina subspecialty finished on an innovative note with the introduction of several first time results of clinical trials. Several of them focused on novel therapeutic agents for age-related macular degeneration (AMD). For neovascular AMD (nAMD), we were introduced to the results on abicipar, a continued quest for a better drying agent involving new pathways and those requiring less frequent injection dosing aimed at achieving comparable functional and anatomical outcomes. Meanwhile, others explored new pathways and venues to tackle dry AMD and geographic atrophy. 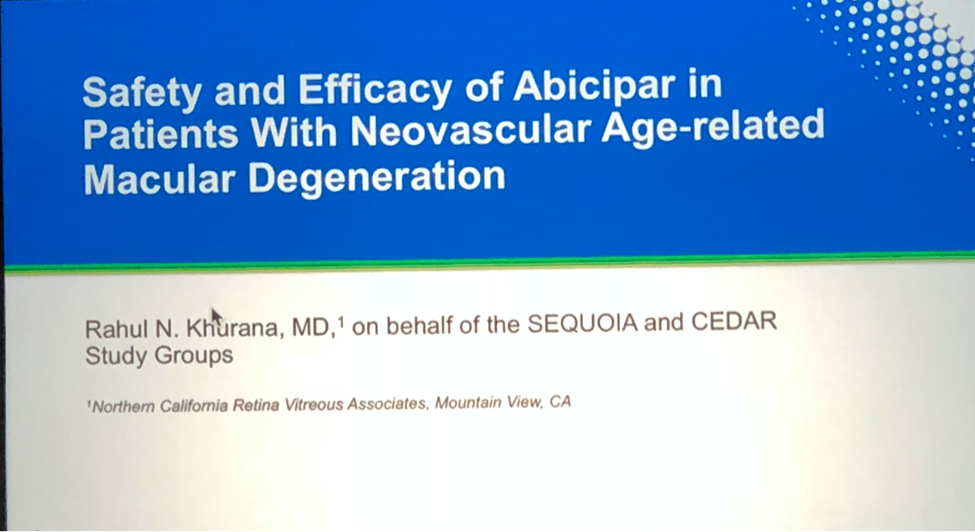 Abicipar is a new compound in a novel class of molecules called DARPins (short for designed ankyrin repeat proteins). These are antibody mimetic proteins which demonstrate very high binding affinity to target proteins. Compared to ranibizumab, abicipar demonstrates a 100 fold higher affinity for VEGF-A and a longer half life. Dr. Rahul Khurana presented the results of SEQUOIA and CEDAR, 2 parallel, phase 3, 52-week long, randomized studies with identical protocols. These studies are designed to study the safety and efficacy of abicipar versus ranibizumab in nAMD. Primary endpoint was the percentage of patients with stable vision (less than 15 ETDRS letter loss) at the end of the study. Secondary endpoints included: 1) Mean change in vision from baseline, 2) mean CRT change from baseline, and 3) percentage of > 15 letter gainers at 52 weeks. Over 2800 patients were screened for SEQUOIA and CEDAR and each study included 949 patients and 939 patients respectively. Patients were randomized to received either 3 monthly loading doses of abicipar followed by 2q8, 2 monthly loading doses of abicipar followed by 2q12 or ranibizumab q4. 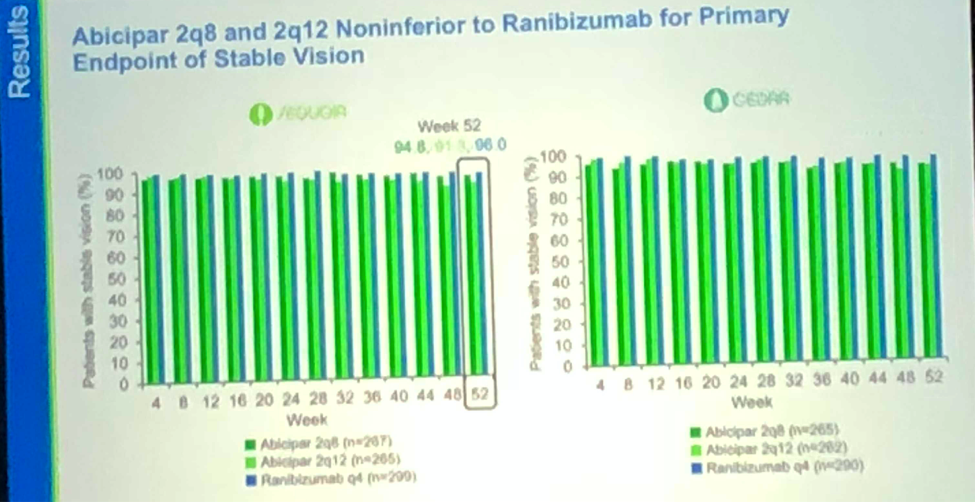 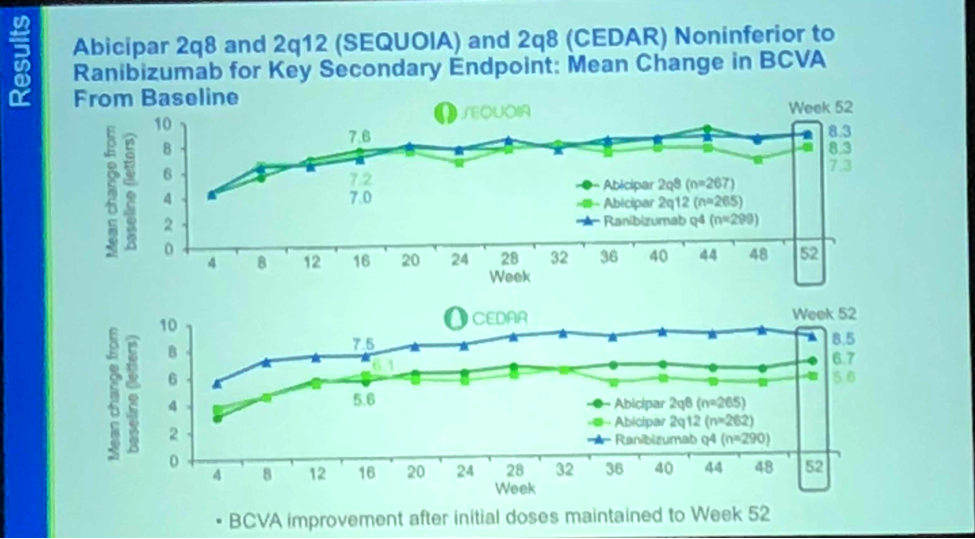 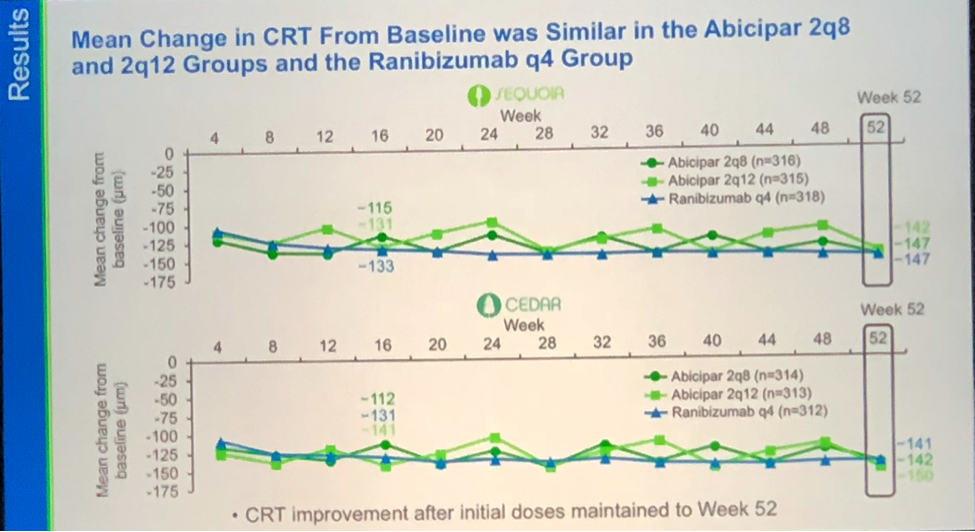 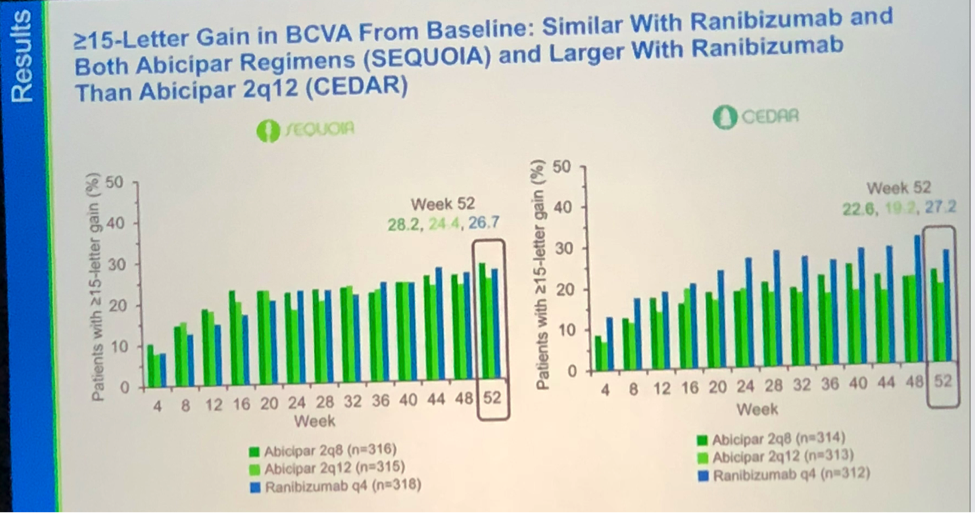 Mean CRT were similar between the groups. The number of patients who gained >15 letters was also similar amongst the three study arms, ranging from 28.2%, 24.4% to 26.7% in SEQUOIA to 22.6%, 19.2% to 27.2% in CEDAR. Interestingly, the abicipar groups presented more ocular adverse events following treatment (around 15% vs 0.3% for ranibizumab), most notably in the form of intraocular inflammation in the form of uveitis, vitritis and vasculitis. Most of these episodes were classified as mild or moderate and over 80% of them were treated and responded to topical corticosteroid.