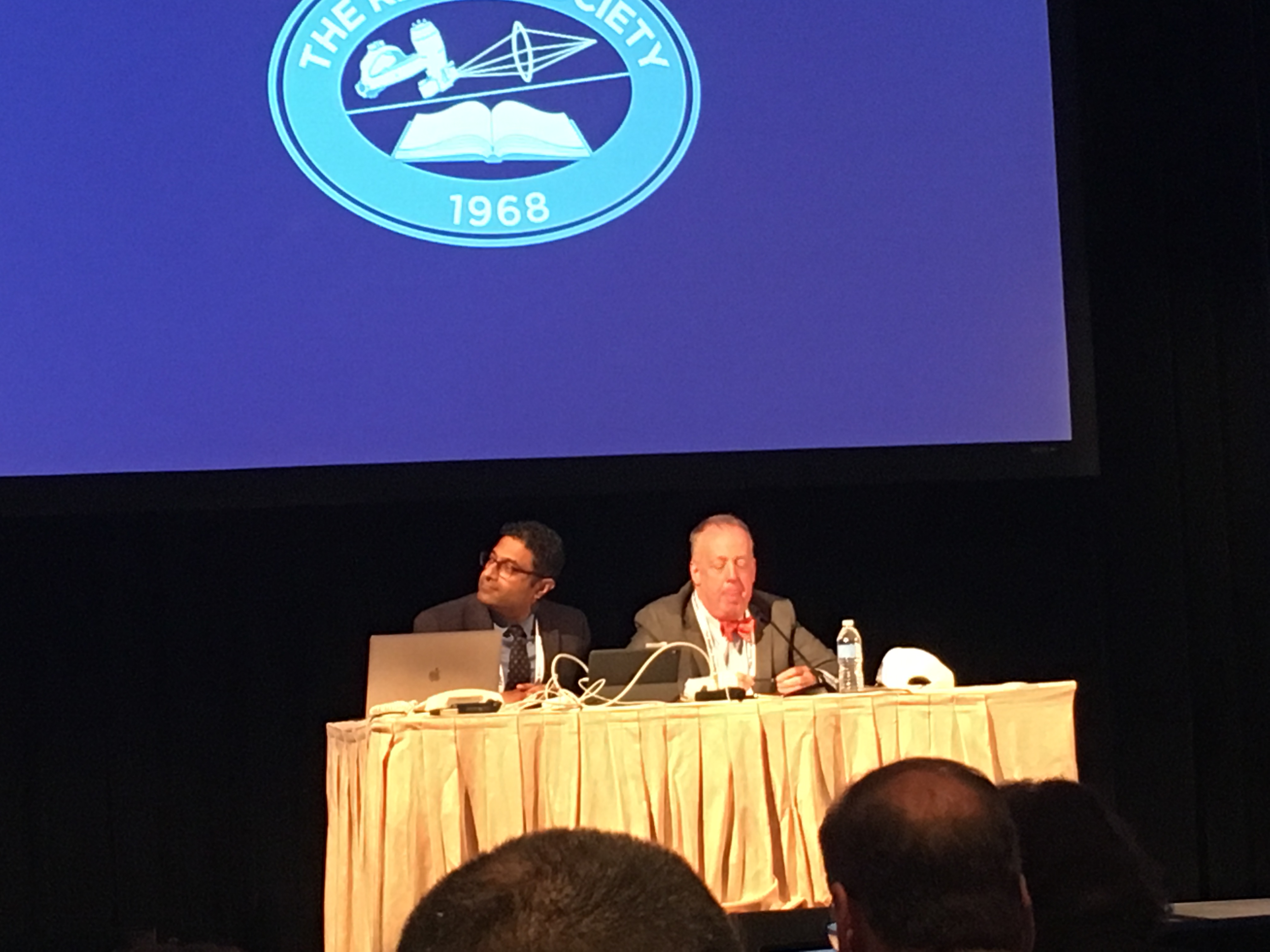 Dr. Sadda and Dr. Brown[/caption]  John A. Wells III, MD: OPT-302 for VEGF C/D Inhibition   Dr. Wells from Palmetto Retina Center in South Carolina presented data from a Phase I trial investigating the novel "trap" inhibitor of VEGF-C and D, OPT-302, from Ophthea. There were two parts to the study. Part 1 was a dose escalation study that prospectively examined the safety up to 2 mg of OPT-302 for neovascular AMD. There were no signs of toxicity. Part 2 was the dose expansion portion of the study, which randomized patients 3:1 to OPT-302/ranibizumab combination treatment or OPT-302 monotherapy. There were 38 in the combination arm, and 13 in the monotherapy arm. Half of the subjects were treatment naive, while the other half had received previous anti-VEGF treatment. There were no toxic effects noted. Two subjects developed mild iritis. PK analysis showed that the half-life of OPT-302 is 8 days. Combining OPT-302 with ranibizumab had no effects on its pharmacokinetics. Vision improved overall, particularly in the treatment-naive patients, with a reduction in macular thickness. Approximately half of the patients who received OPT-302 monotherapy required rescue ranibizumab treatments. Overall, the Phase I trials demonstrated the safety of OPT-302 for intravitreal administration in the 51 enrolled patients. Phase II studies are now underway, and will recruit ~351 patients for neovascular AMD with ranibizumab as the comparator, and ~117 patients with diabetic macular edema, with aflibercept as the comparator. [caption id="attachment_2476" align="alignnone" width="4032"] 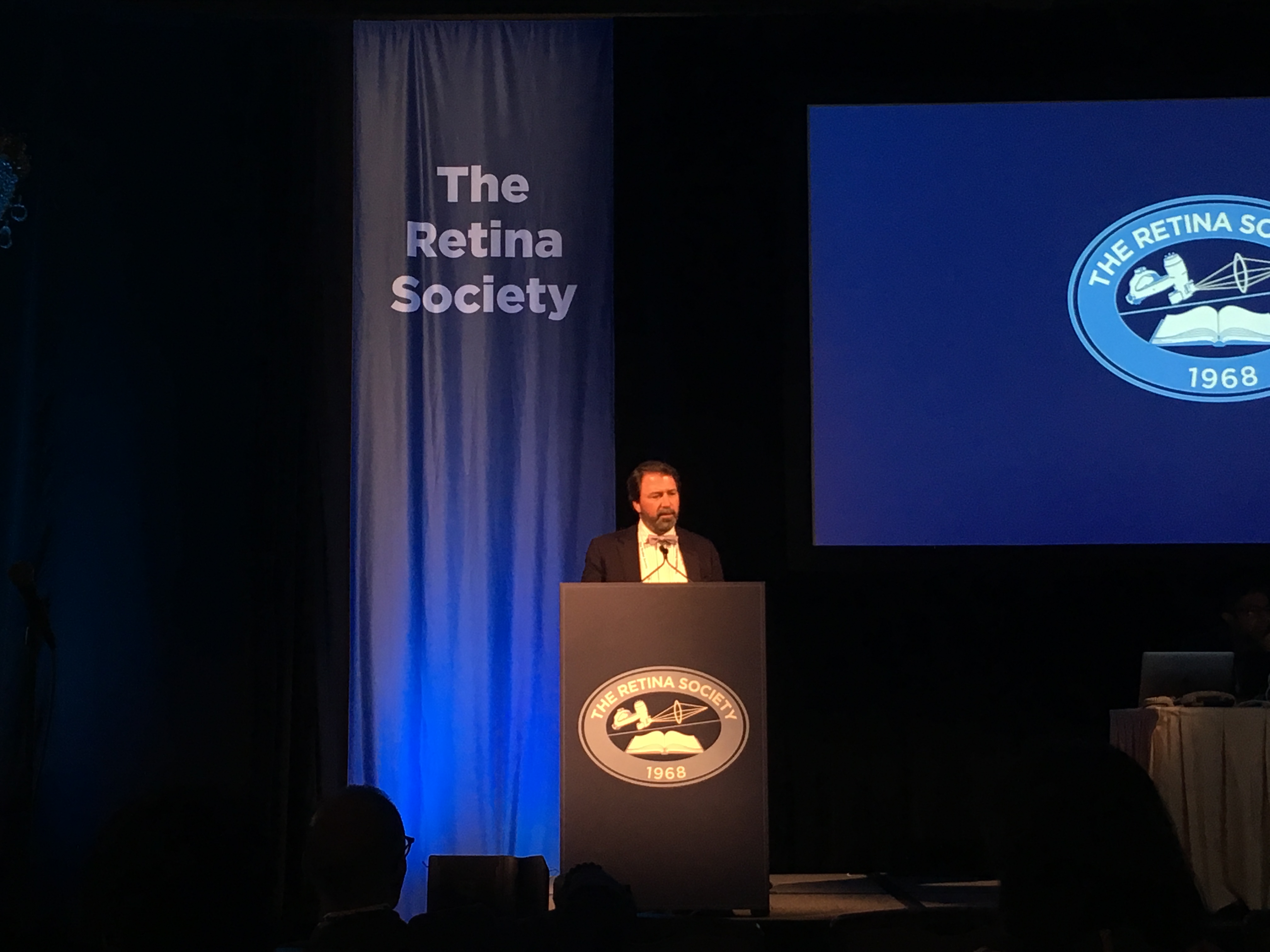 Dr. Wells[/caption] Kapil Kapoor, MD: Ziv-aflibercept ZEBRA study Dr. Kapoor from Wagner Macula & Retina Center then presented data from the first ziv-aflibercept clinical trial for neovascular AMD in the United States. He first indicated that the molecules are identical between aflibercept and ziv-aflibercept, but that the differences are solely in the buffering solution (250 mOsm for aflibercept vs 810 mOsm for ziv-aflibercept). Previous animal studies showed have shown the safety of intraocular administration of ziv-aflibercept, but we do have to remember Dr. Michael Marmor's rabbit studies that showed retinal damage when osmolarity increases over 1000 mOsm. Dr. Kapoor indicated that human eyes are much larger, and that the vitreous also has a natural buffering capacity, especially with higher volume. More than 6,000 injections of ziv-aflibercept have been reported in studies (mostly, if not all, outside of the United States). The ZEBRA study enrolled patients who were already undergoing treatment with anti-VEGF agents. The same treatment regimen was continued after conversion to ziv-aflibercept. The study included 14 control eyes and 17 treatment eyes. The two arms are similar baseline visual acuity, central foveal thickenss, previous treatment, and rates of bevacizumab vs aflibercept. The primary endpoint was measured at 36 weeks, which showed that visual acuity and OCT thickness were the same in the two arms. Dr. Kapoor indicated that the study demonstrated the safety and non-inferiority of ziv-aflibercept, which if adopted, could potentially result in $1.45 billion over 2 years. Dr. Lee Jampol commented that the DRCR.net had previously considered studying ziv-aflibercept, but regulatory hurdles prevented the use of ziv-aflibercept even in the setting of a clinical trial. Dr. Kapoor indicated that they were able to receive IRB approval and work with a compounding pharmacy to provide the medication. Dr. Marmor reminded us that high osmolality could cause retinal damage, including retinal detachment, especially if is injected close to the retina. [caption id="attachment_2477" align="alignnone" width="4032"] 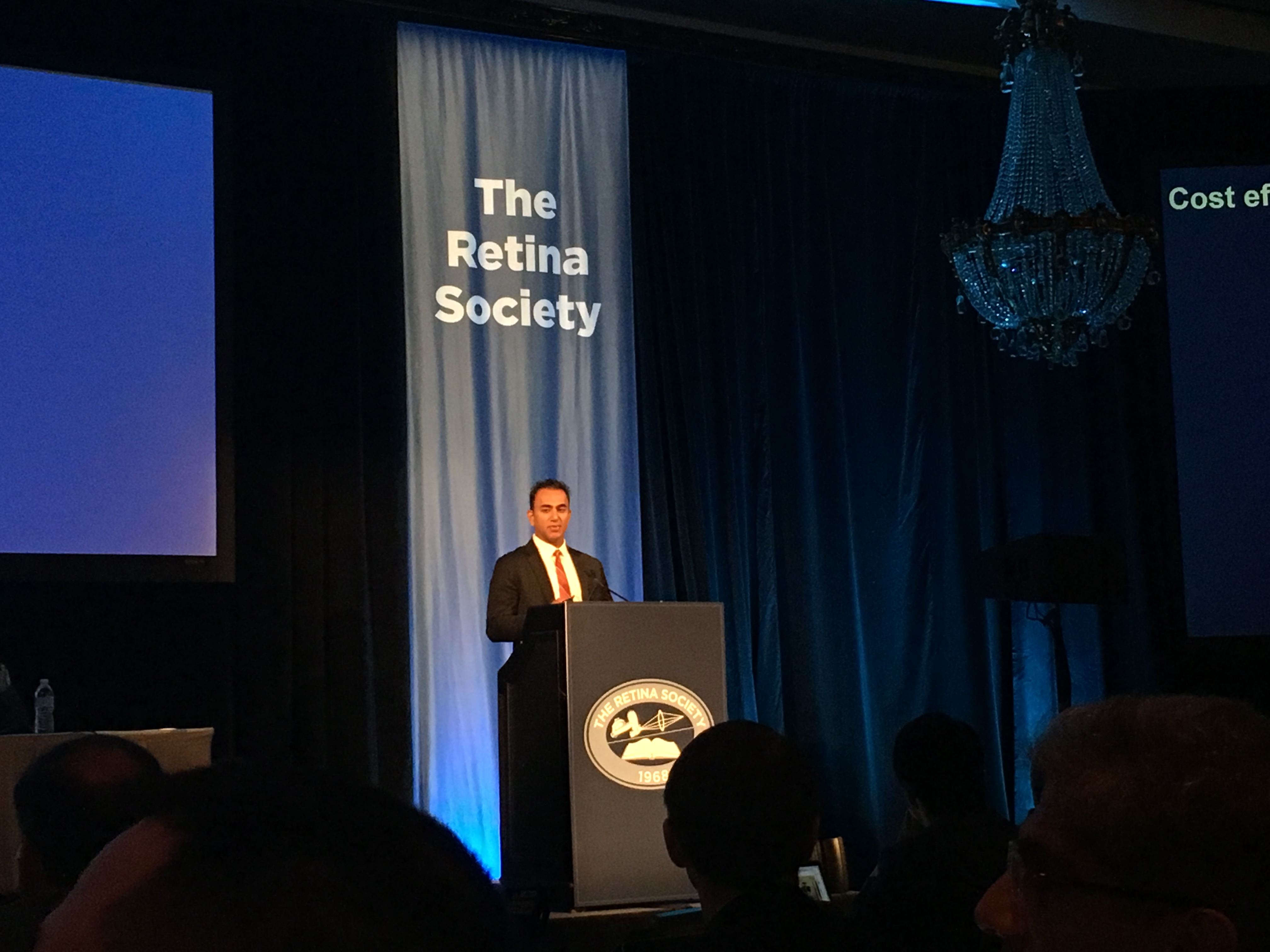 Dr. Kapoor[/caption] Szilard Kiss, MD: Gene therapy Dr. Kiss from Weill Cornell Medical Center gave a talk on a new approach to gene therapy for AMD. There have been 3 previous studies (Sanofi/Genzyme, Oxford Biomedica, and Avalanche), but none have progressed past Phase I for various reasons. However, they did show the safety of this treatment paradigm. Intravitreal delivery is less invasive of a procedure, but non-human primate studies have shown that the transfection rate is 100-1000 times lower. There are also neutralizing antibodies in the vitreous against adeno-associated viral vectors, which may neutralize gene therapies delivered by intravitreal injections. Therefore the subretinal delivery appears to be the more promising delivery approach. Previous trials have used the AAV2 vector, but Dr. Kiss indicated that it may not be the best vector for gene therapy in AMD. RegenXBiO recently developed RGX-314, an optimized AAV8-NAV gene therapy treatment to express anti-VEGF activity. AAV8 appears to have higher transfection rates compared to AAV2 when injected subretinally. He presented data for the first time from a Phase I study that enrolled non-treatment naive patients with neovascular AMD who first received intravitreal anti-VEGF agents to confirm that the patients respond to anti-VEGF treatment first. Vitrectomy with subretinal injection of RGX-314 was then performed, and the primary endpoint of safety was assessed at 26 weeks. All patients were pseudophakic, and air-fluid exchange was performed at the end of the surgery. Patients were retreated with intravitreal anti-VEGF if there was any disease activity. The treatment was found to be well tolerated, and exhibited dose-dependent protein expression. The retinal thickness remained stable, but there was a reduction in the number of injections required. Vision was maintained or improved. In the highest dose delivered, no additional injections were required. [caption id="attachment_2478" align="alignnone" width="4032"] 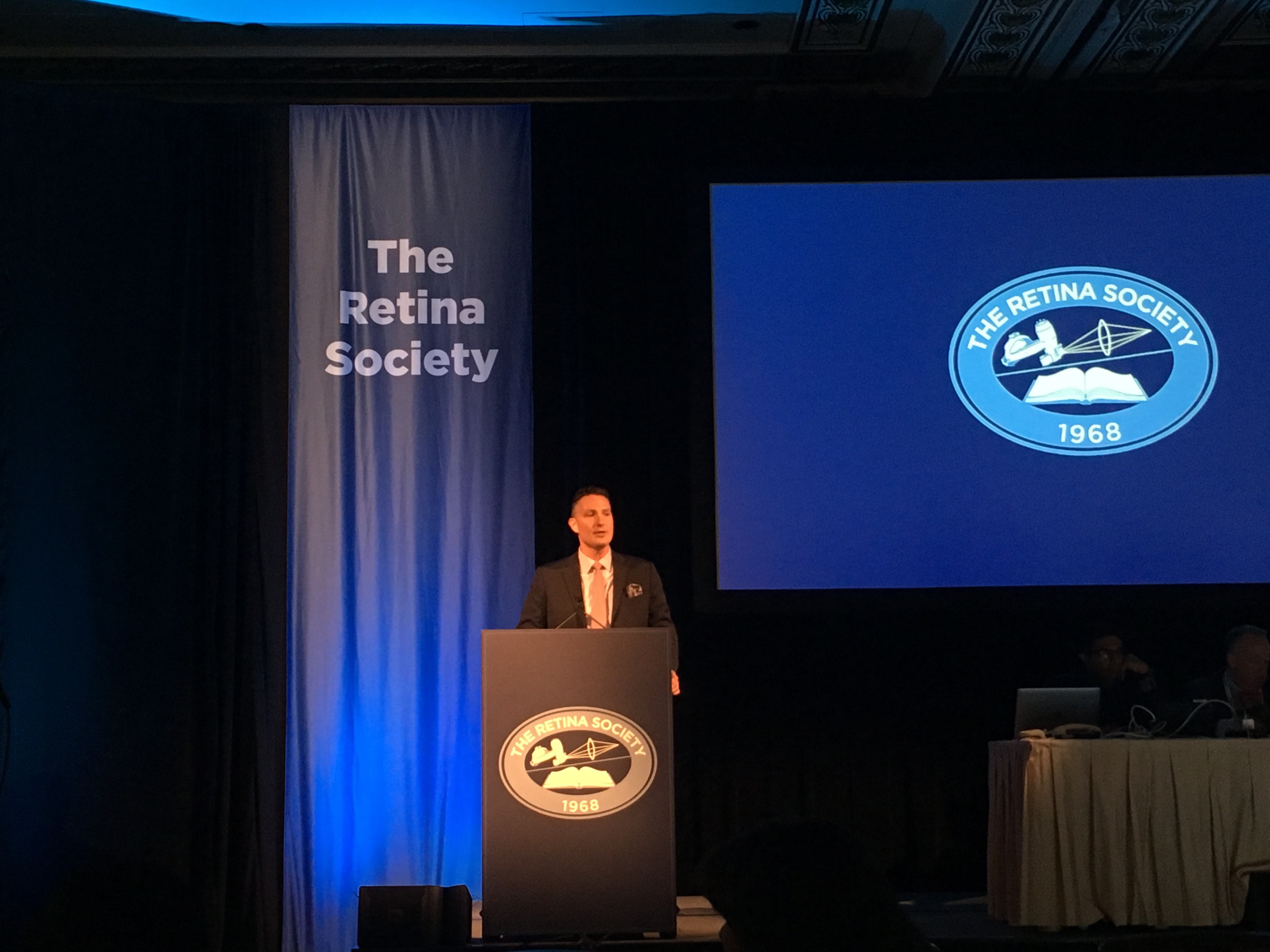 Dr. Kiss[/caption] Nathan Steinle, MD: Baseline FA characteristics in VIEW 1/2 Dr. Steinle from California Retina Consultants, presented post-hoc analysis of baseline fluorescein angiography (FA) features of the CNVM in the VIEW1/2 studies. His team pooled all of the patients and examined their anatomic and functional outcomes. He found that patients with the smallest lesion sizes had the best visual prognosis. Leakage on FA was also a risk factor, and classic CNVM patients improved the most. Interestingly, lesion size was not predictive of how dry the macula can become. One goal was to determine which characteristic have the highest recurrent rates, since the majority of US retina specialists use an iteration of the treat-and-extend paradigm. Most of the baseline characteristics were not able to predict recurrence rates, but the smallest lesions had the lowest recurrence rates. This may be one potential reason to catch CNVM early while they are still small. Andrew Moshfeghi, MD: Real-world outcomes Dr. Moshfeghi from USC Roski Eye Institute presented the outcomes of anti-VEGF treatment for neovascular AMD and diabetic macular edema (DME) in a retrospective real-world data-base study. He indicated that over many clinical trials, we have learned that there is a decline in vision the more we deviate from fixed dosing. The question is: does this happen in the real world? EHR data were collected from 251 retina practices between 2012 and 2015. 8,127 patients were ultimately included. Most patients were receiving 7 or more injections a year. After the first year, more frequent dosing did result in better visual acuity. There were approximately 3,000 patients included in the DME portion of the study. The benefit of frequent injections was also apparent in patients with DME. [caption id="attachment_2480" align="alignnone" width="4032"] 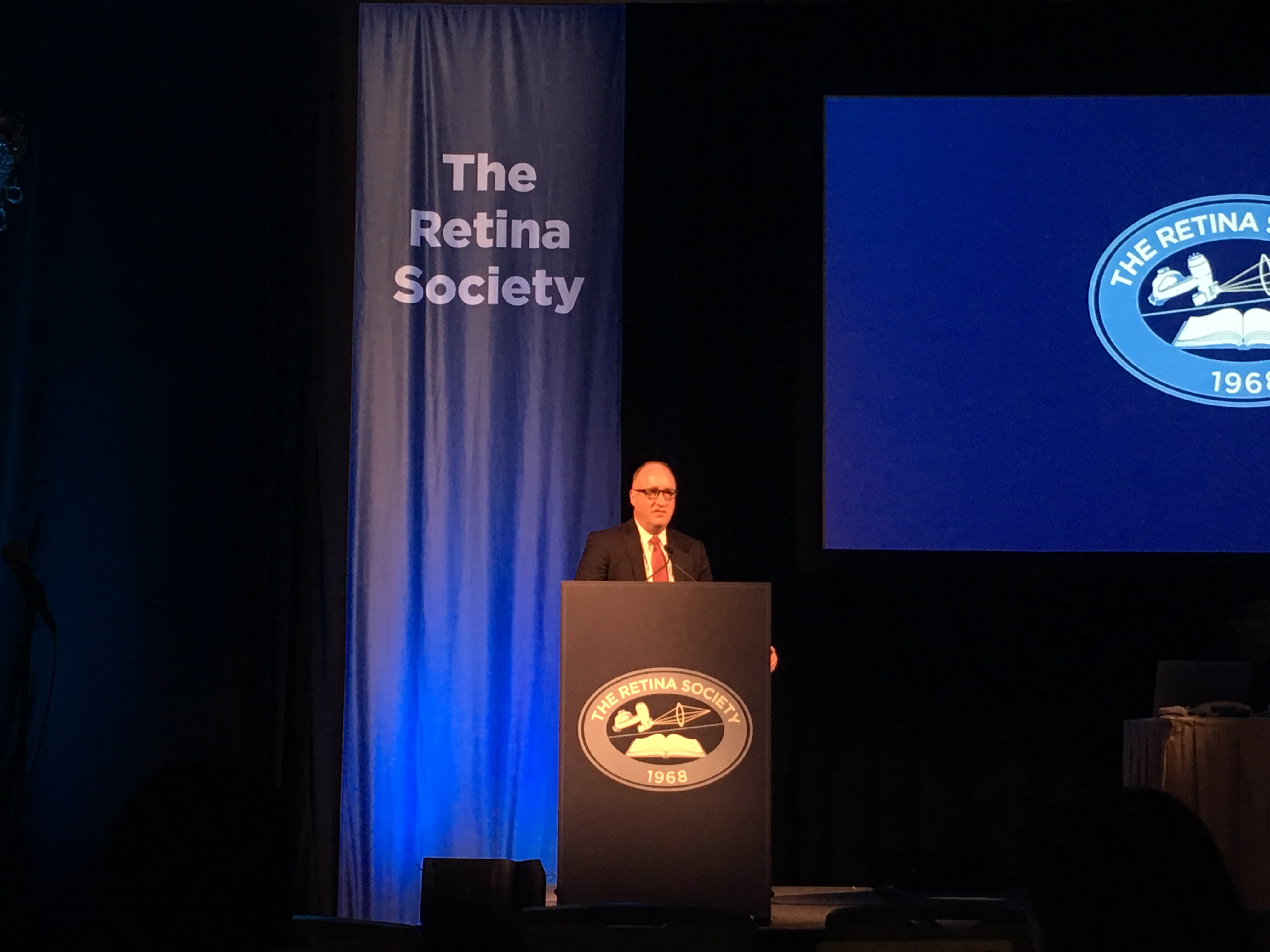 Dr. Moshfeghi[/caption] Charles Wykoff, MD, PhD: Real-world outcomes Dr. Charlie Wykoff from Retina Consultants of Houston also presented real-world data using a different dataset. His team examined the 12-month outcomes from the US Retina Database, which includes 178 practices. Dr. Wykoff first discussed the importance of real-world data because patients do not live in controlled settings of clinical trials. The study enrolled 30,106 patients who initiated neovascular AMD treatment from 2009 to 2016. Overall, 40% were treated with bevacizumab, 38% with ranibizumab, and 22% with aflibercept. 27% of eyes switched anti-VEGF agents - most commonly in patients initially treated with bevacizumab. Visual acuity initially improved, but gradually declined during the follow-up period. There were no differences between the anti-VEGF agents. Overall, visual gains were limited. Patients with worse baseline vision gained the most, but these patients also had worse absolute visual outcomes. A mean of 6.9 injections were performed during the first year. 34% of patients received 8 or more injections, and these patients trended towards better visual outcomes, compared to those who received 7 or fewer injections. From an anatomic standpoint, the bevacizumab arm started with the largest central retinal thickness readings, and also improved the most. Dr. Wykoff concluded that there is still an unmet need for new treatments and management approaches. A discussion followed regarding the limitations of large database studies with non-granular data, but that these studies play an important role in providing overviews of how the clinical trial data are being translated into the real world, to allow identification of avenues for improvement. [caption id="attachment_2481" align="alignnone" width="4032"] 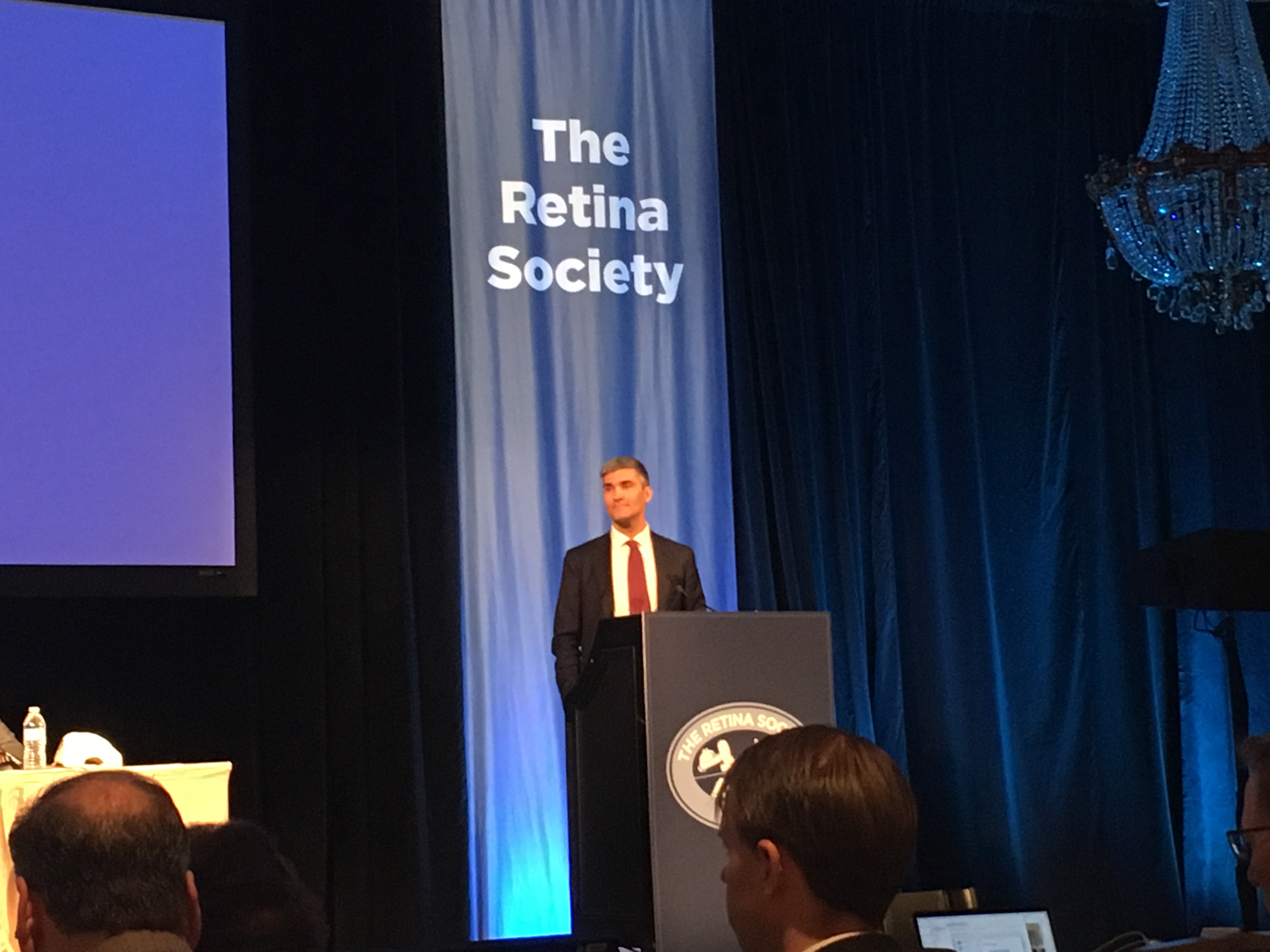 Dr. Wykoff[/caption] Theodore Leng, MD: Cross-trial comparison Dr. Leng from Byer Eye Institute of Stanford University presented his post-hoc analysis of prior clinical trial data, focusing on extended dosing regiments. He examined PIER (the only trial with quarterly visits and treatments), EXCITE, and CABERNET's ranibizumab arm (true quarterly dosing). These were the quarterly dosing studies. VIEW 1 and 2 (2nd year only) and HARBOR (quarterly dosing equivalent with monthly visits and rescue injections) were included also as modified quarterly dosing reg. Mean baseline VA was comparable between all of the studies. Between PIER, EXCITE and CABERNET, patients in the CABERNET studies had the most visual gains. He concluded that regular visits are still required to determine which patients will benefit from more, or less, treatment. Dr. Sadda commented that Dr. Moshfeghi's study showed the importance of injection frequency, and this study showed the importance of frequent clinic visits. [caption id="attachment_2485" align="alignnone" width="4032"] 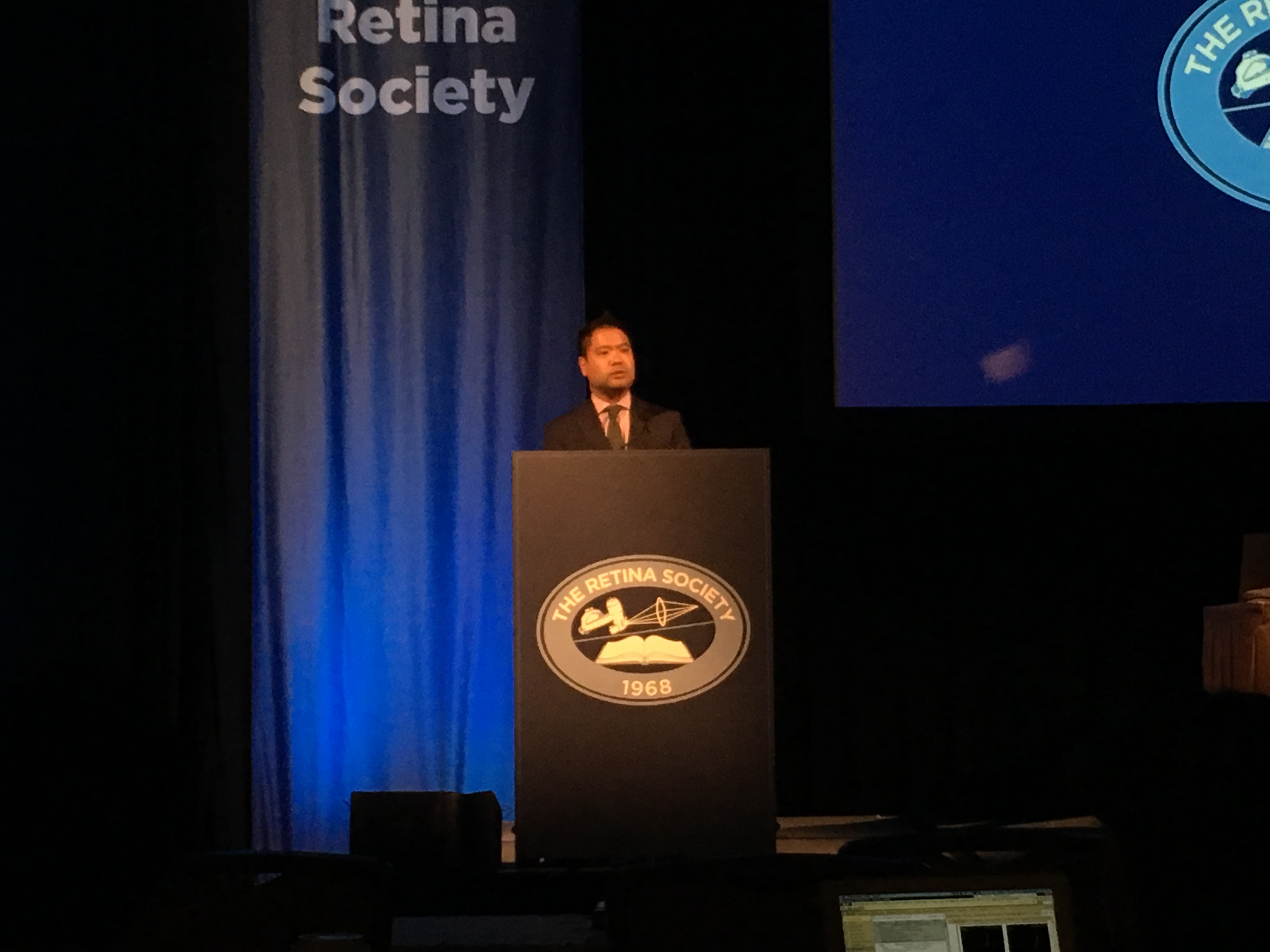 Dr. Leng[/caption] Jay Wang, MD: Swept Source-OCT Dr. Wang was the final speaker of the AMD session, and the sole retina fellow (congratulations!). His team from Mass Eye & Ear utilized swept source OCT to examine the choroid in AMD. In a prospective cross-sectional collaboration between Boston and Portugal, he examined choroidal thickness, vessel density, and choroidal vessel volume. 610 eyes of 327 patients were included, along with 100 control eyes. There was a trend towards thinner choroidal thickness in more advanced stages, but multivariate analysis did not show an association when controlled for other variables. Vascular density was found to decrease in late AMD, but there were no changes in choroidal thickness and vessel volume. Dr. Sadda commented that Rick Spaide has shown that choroidal thickness has been implicated in eyes with reticular pseudodrusen, which may have to be taken into consideration also in future studies. [caption id="attachment_2486" align="alignnone" width="4032"] 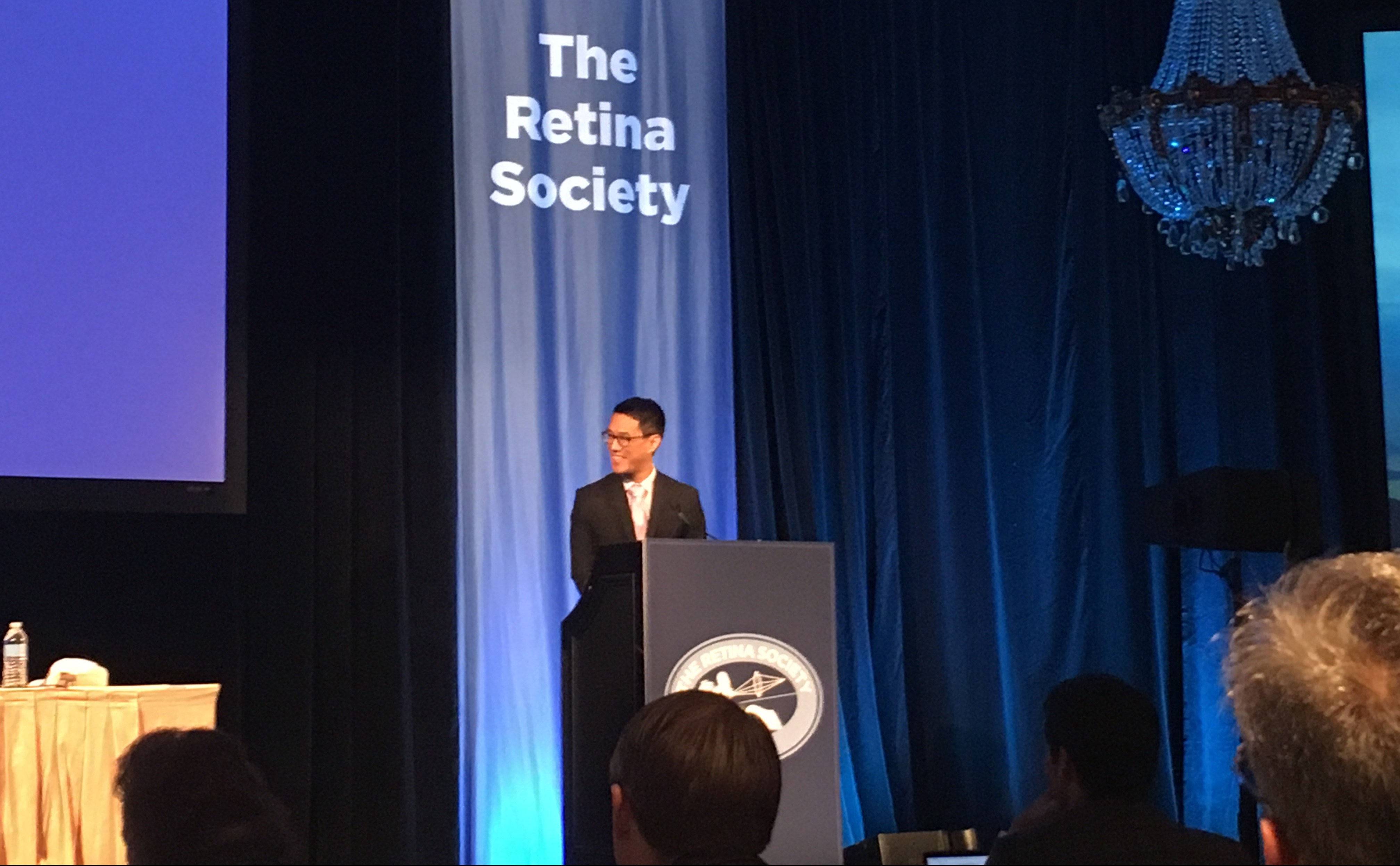 Dr. Wang[/caption] This was a captivating session, and we hope that you enjoyed reading about these great presentations. Please stay tuned for several more posts from the 2018 Retina Society annual meeting.