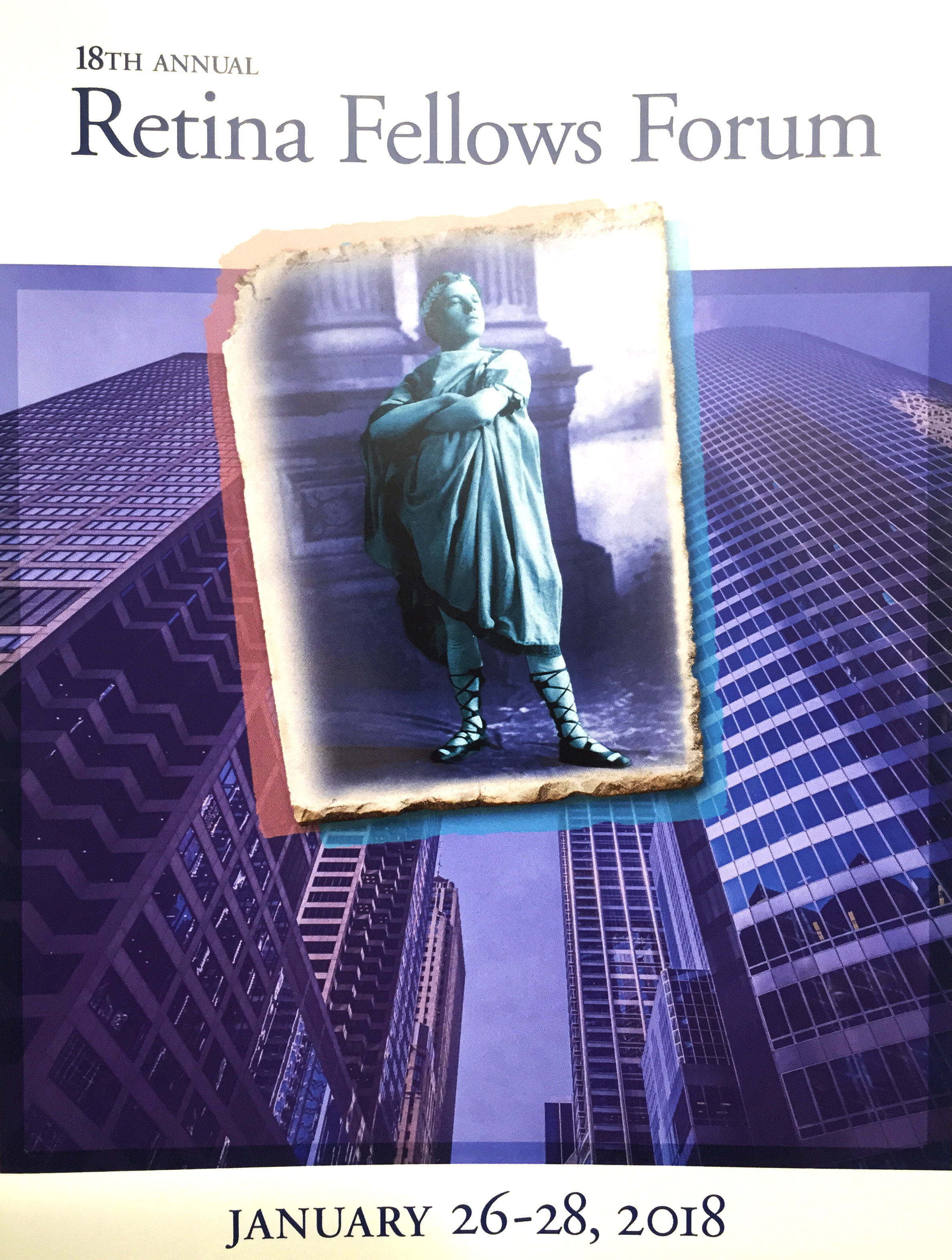 Following the introduction, Dr. Peter Kaiser (Cole Eye Institute) led a panel discussion about non-neovascular and neovascular AMD management, which highlighted several controversies in AMD. One such controversy is whether patients should be genotyped prior to being placed on AREDS vitamins. In a spirited debate, Dr. J. Michael Jumper (West Coast Retina) shared the findings of the ASRS task force, which did not find sufficient evidence to recommend routine genetic testing for AMD patients. He cited the discordance that can occur in patients who have low risk alleles but a high risk AMD phenotype, which can complicate how these patients are counseled with regard to their risk of developing advanced AMD. Dr. Carl Awh described recent research highlighting the potential harm that AREDS vitamins can have on patients with high CFH and low ARMS2, but in the end, a slim majority of the audience felt that there was no role for genetic testing in AMD patients.

A second controversy in AMD management is whether OCTA is helpful in diagnosing and following patients with AMD. Dr. David Chow argued that OCTA can be used in the routine management of patients with AMD and in some cases identifies CNVMs that are not apparent on FA testing, particularly type 1 CNV. Dr. Amy Schefler (Retina Consultants of Houston) discussed the obstacles to widespread OCTA use including the lack of simple, user-friendly, image analysis software and issues with reimbursement, which proved convincing to the audience as most felt that OCTA was not necessary in the management of AMD.

Looking to the future, Dr. Kaiser discussed promising new drug therapies for neovascular AMD treatment. Examples of new drugs include brolucizumab (Novartis), and abicipar pegol (Allergan), both anti-VEGF agents that have completed phase 3 clinical trials and have the potential to reduce injection frequency in patients with neovascular AMD. Dr. Kaiser also highlighted several molecules developed by Aerpio pharmaceuticals and currently in Phase 1/2 trials that target inhibition of VE-PTP in the Tie2 pathway. 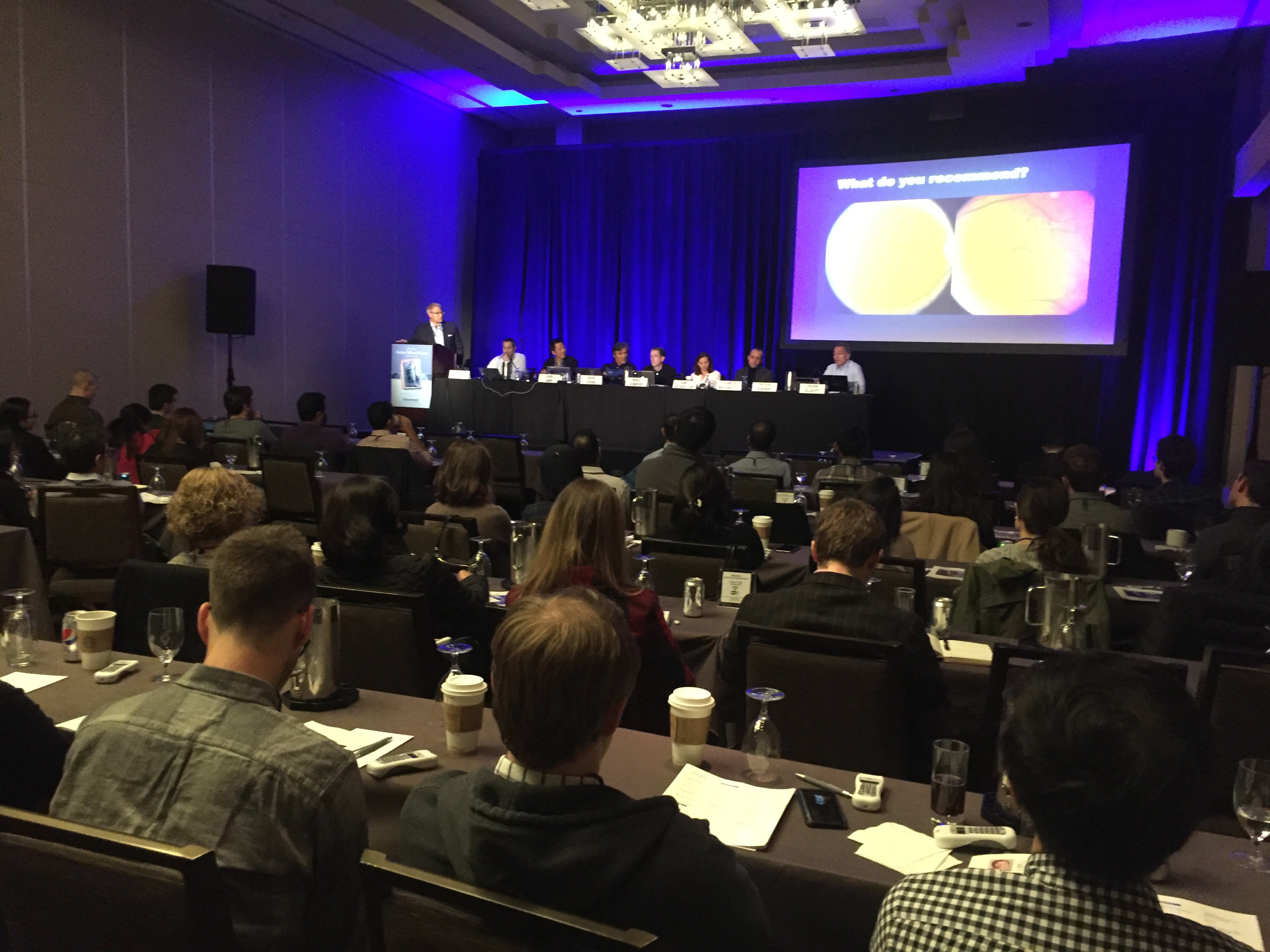 Dr. Amy Schefler discussed recent progress in the diagnosis and management of intraocular tumors. She described the technique used to administer intra-arterial chemotherapy for retinoblastoma and highlighted intravitreal chemotherapy as a new frontier in the management of vitreous seeding. Dr. Schefler presented compelling data demonstrating that the risk of extraocular tumor spread after intravitreal chemotherapy injections is extremely low if cryotherapy is used to treat the injection site, copious irrigation of the ocular surface is performed after the injection, and the IOP is lowered before injection via AC tap or ocular massage. She also discussed the role of UBM in choosing an injection site relatively free of seeds or solid tumor. Dr. Schefler also highlighted a recent study published in JAMA Ophthalmology by Dr. Jesse Berry and her colleagues at USC who detected cell-free DNA fragments from retinoblastoma cells in the anterior chamber of retinoblastoma patients with quiet and apparently tumor-free anterior segments. The authors showed that the DNA fragments can be successfully used to analyze tumor genetics in these patients.

Dr. Schefler then turned her focus to choroidal melanomas. She reviewed the prognostic factors for survival in patients with choroidal melanomas, beginning with gene expression profiling currently performed by Castle Biosciences, and she described the technique she prefers for obtaining a tumor biopsy sample for gene expression profiling. Dr. Schefler also presented a study published in Science in 2010 that showed the presence of frequent mutations in BAP1 in metastasizing uveal melanomas, and emphasized the importance of eliciting a thorough family history from patients with these tumors. 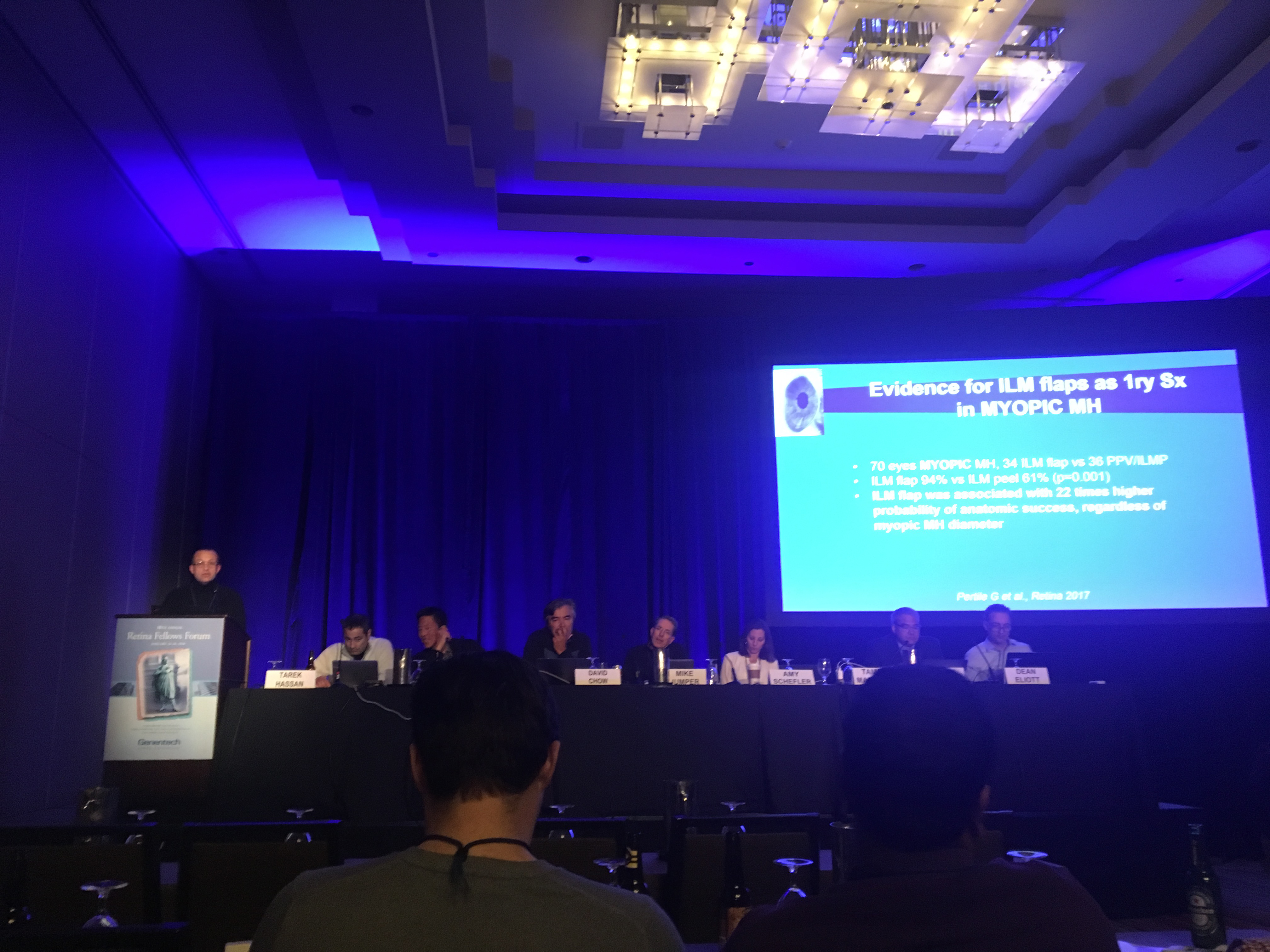 The last part of the night at Fellows’ Forum was spearheaded by Dr. Tamer Mahmoud (Associated Retinal Consultants/Beaumont) who presented surgical tips and tricks for approaching vitreomacular traction, myopic, chronic, and recurrent macular holes. While 30% of vitreomacular traction cases resolve spontaneously, there is a subset of cases with subretinal lucency that have lower rates of spontaneous recovery. For the surgical management of vitreomacular traction, the common theme from the panel was best summarized by Dr. Chow: “use controlled, slow movements” when creating a PVD with the main goal of peeling toward the fovea to prevent a full thickness hole. Dr. Jumper tends to peel the hyaloid toward the fovea and then sever the stalk of the VMT, while Dr. Mahmoud releases the posterior hyaloid around the fovea 360 carefully with a cutter and then lifts the rest of the posterior hyaloid from the disc. Dr. Mahmoud speaking about surgical techniques for the treatment of complex macular holes

The panel then discussed different surgical techniques for chronic and myopic holes. Dr. Mahmoud presented compelling data from Rizzo et al in Retina describing 620 eyes that were treated with an ILM flap versus ILM peel. For macular holes >400 and/or longer axial lengths, the success rates for ILM flaps ranged from 88.4-95.6% for ILM flaps compared to 38.9%-78.6% for ILM peeling only, respectively. For myopic macular holes, Dr. Mahmoud presented the “trap door” technique, in which the ILM is peeled from nasal to temporal, with a resultant temporal hinge. The flap is then draped back onto the hole. The panel then discussed different approaches for an inverted ILM flap.   Dr. Mahmoud’s technique involves widely peeling the ILM nearly 270 degrees around the hole with a flex loop, sparing the fovea, and then re-draping the ILM over the hole with viscoelastic to keep the flap in place. Alternatively, Dr. Kaiser creates an ILM flap and sometimes supplements with a temporary macular buckling effect by injecting Healon G trans-sclerally. Dr. Mahmoud then transplanted us toward the future by ending the night with a series of surgical videos on retinal and chorioretinal transplants—techniques that are currently in press. While long term results are unknown, a multicenter study demonstrated a 90% closure rate for chronic, recurring holes with 43% of patients gaining vision, 40% unchanged in vision, and 16% with worse vision. Please stay tuned for Day 2 coverage.