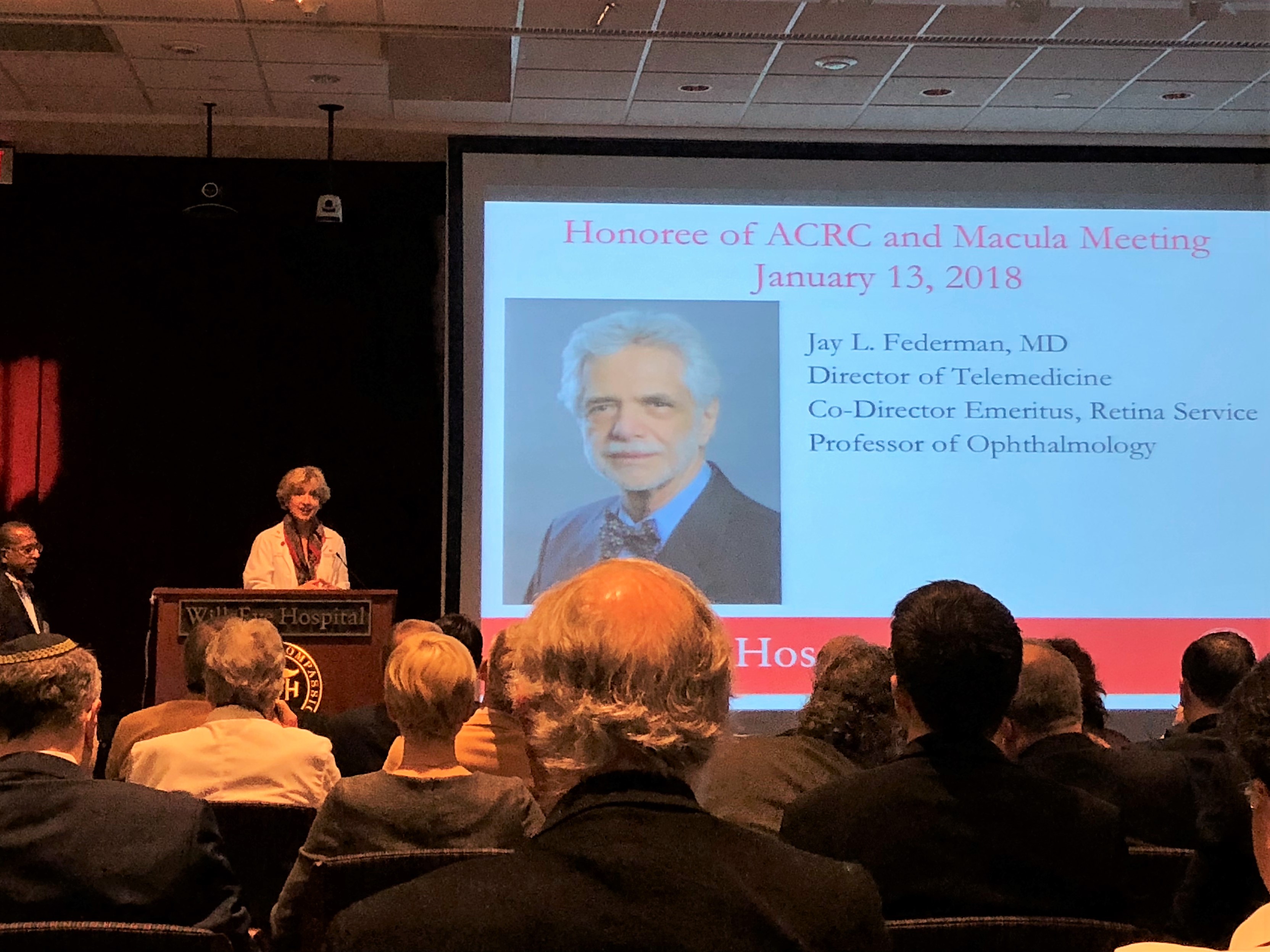 Kathrine Talcott, Ferhina Ali, Christopher Aderman Second Year Vitreoretinal Surgery Fellows Wills Eye Hospital Saturday January 14th was the 2018 Macula meeting, the third and final day of the Atlantic Coast Retinal Club (ACRC) Meeting, where we heard exciting and educational talks by esteemed faculty on innovation within the retina field. Drs. Haller and Sivalingam started the meeting by honoring Dr. Jay Federman, Co-Director Emeritus of the Retina Service of Wills Eye Hospital and Professor at Thomas Jefferson University. They detailed his important roles in moving the field of vitreoretinal surgery from buckling to vitrectomy, including instrument development and bringing silicone oil and perfluorocarbon to Wills. Dr. Michael Trese from Associated Retinal Consultants/William Beaumont Hospital even made an appearance via video celebrating his peer and mentor!
In the spirit of Dr. Federman, there were many talks regarding innovation in the field of retina and vitreoretinal surgery. Dr. Albert Maguire from the University of Pennsylvania and Children’s Hospital Philadelphia kicked off the meeting by discussed Luxterna (voretigene neparvovec) which was recently approved by the FDA for retinal degeneration due to recessive RPE65 mutations. He discussed the procedure from treatment including vitrectomy and epiretinal membrane peeling before subretinal injection of this viral vector greater than 3mm from the foveal center. There were interesting discussions on Spark Therapeutic’s price for the treatments as well as how this treatment has increased quality of life for patients in the clinical trial, including allowing patients to go clubbing! 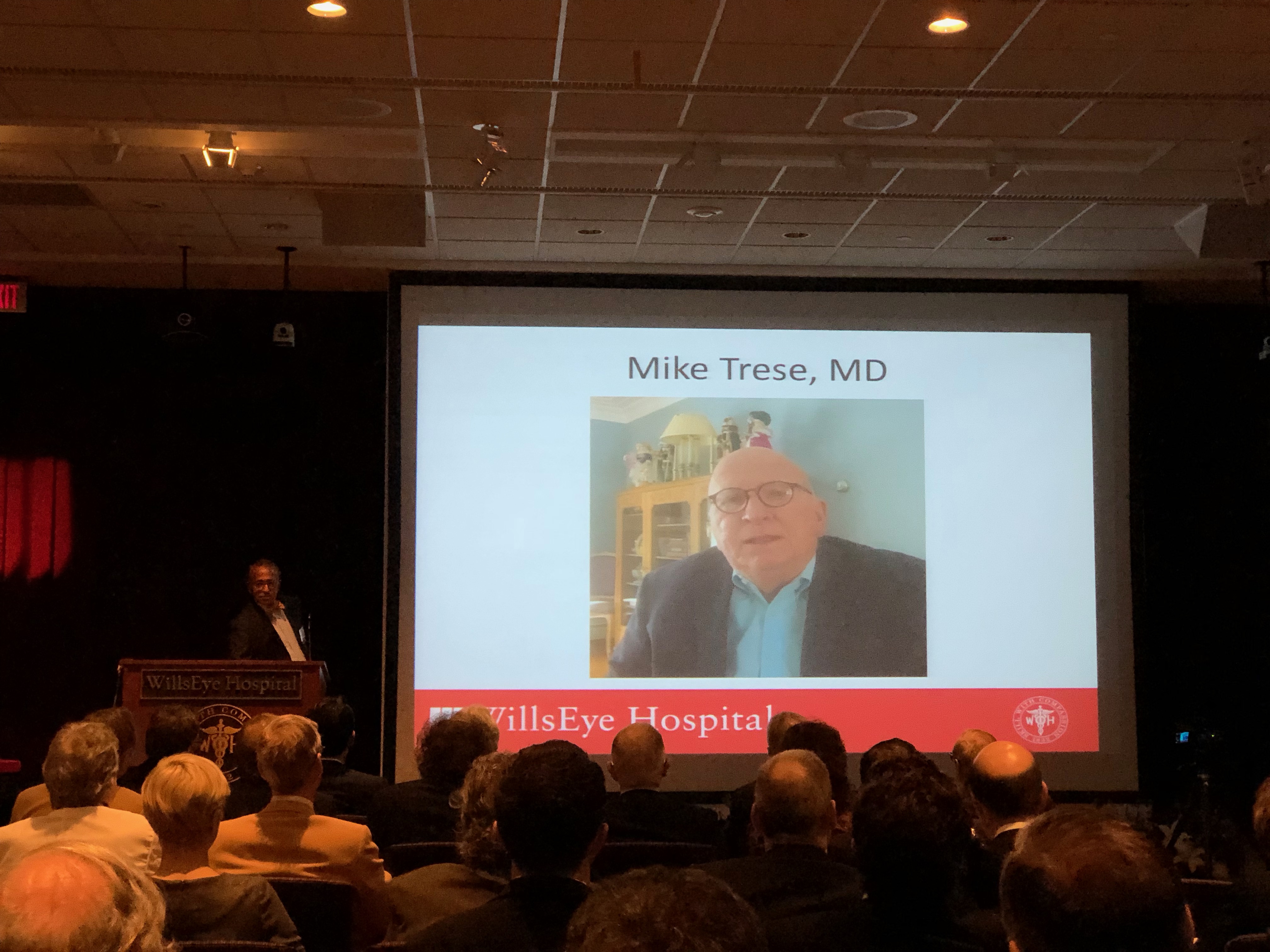 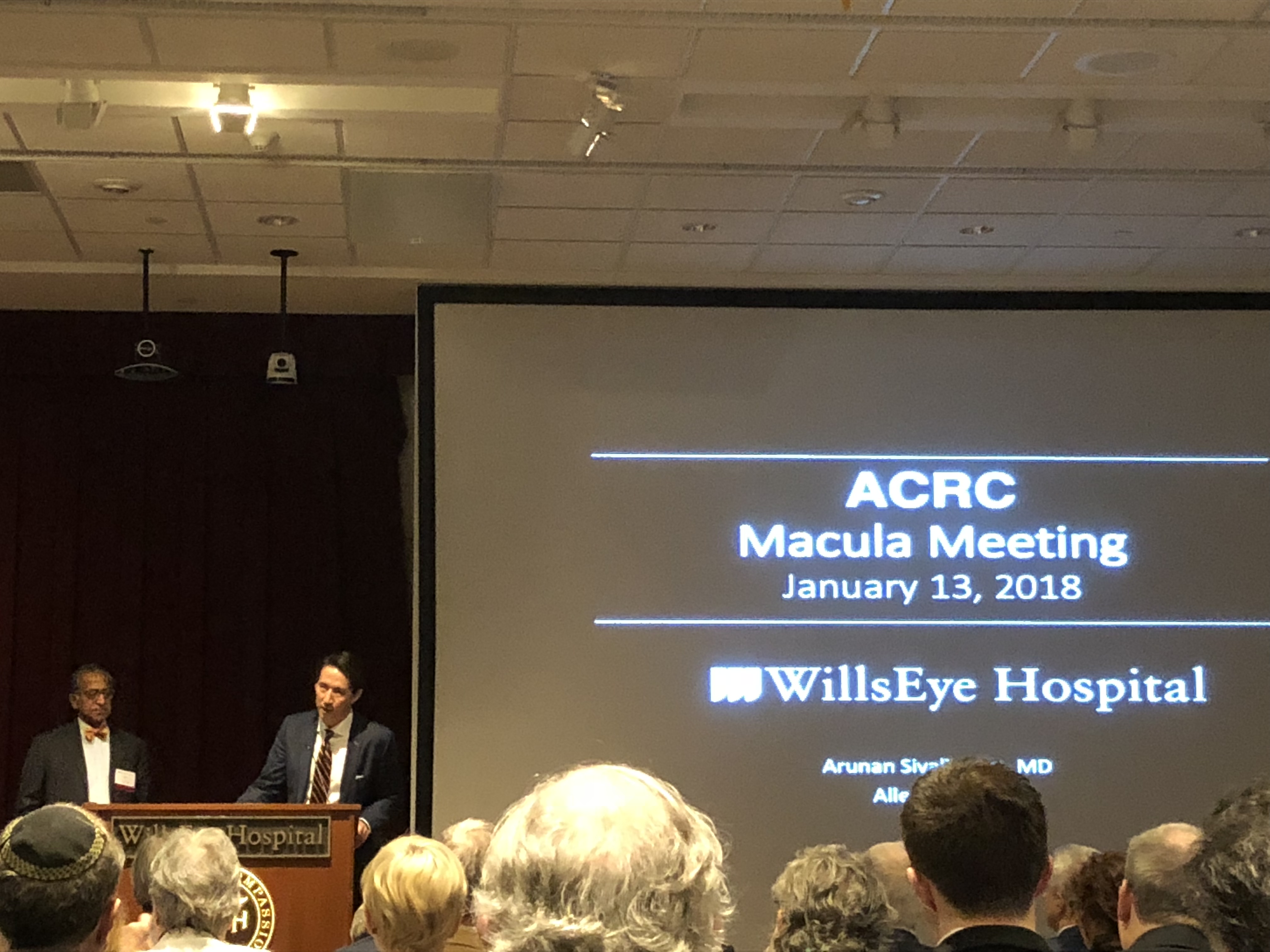 Macula 2018 was organized by Drs. Julia Haller, Carl Regillo, Allen Ho, and Arunan Sivalingam
Meeting participants were given 3D glasses upon arrival to the meeting for talks on 3D Heads Up Vitreoretinal Surgery by Dr. Yoshi Yonekawa of Massachusetts Eye & Ear/Boston Children’s Hospital and Dr. Tom Aaberg of Retina Specialists of Michigan. They discussed this surgical viewing innovation’s benefits, including ergonomics, education, low illuminational surgery, image overlays, and color/gain manipulations. Both offered beautiful surgical videos, including complex membrane peels, scleral-fixated intraocular lens implants, pediatric surgery, oncology cases, and tractional retinal detachments.
Additionally, Dr. Dean Eliott of Massachusetts Eye & Ear described his work on intravitreal methotrexate for the prevention of proliferative vitreoretinopathy (PVR). He discussed how he developed this idea after seeing the lack of PVR after ocular lymphoma patients on systemic methotrexate had chorioretinal biopsies. The anti-proliferative and anti-inflammatory properties have been successful and in preventing PVR and hypopyon in the high-risk trauma and PVR RD patients he has injected. He discussed their approach to aggressive corneal lubrication to prevent decompensation. Later in the day, Dr. Carol Shields discussed new directions in managing high risk melanoma. The risk of metastases depends on cytogenetics and tumor size. Their practice offers genetics to all patients, as the risk of metastases is 39% at 8 years if there are mutations on chromosome 3 and 8. This allows them to personalize prognosis prognosis for patients. She also discussed new treatment adjuvants and modalities. This includes Aura-011 Nanoparticle Therapy (viral-like nanoparticle binds to tumor and couples with photosensitivity) and sunitinib in high-risk patients with uveal melanoma. 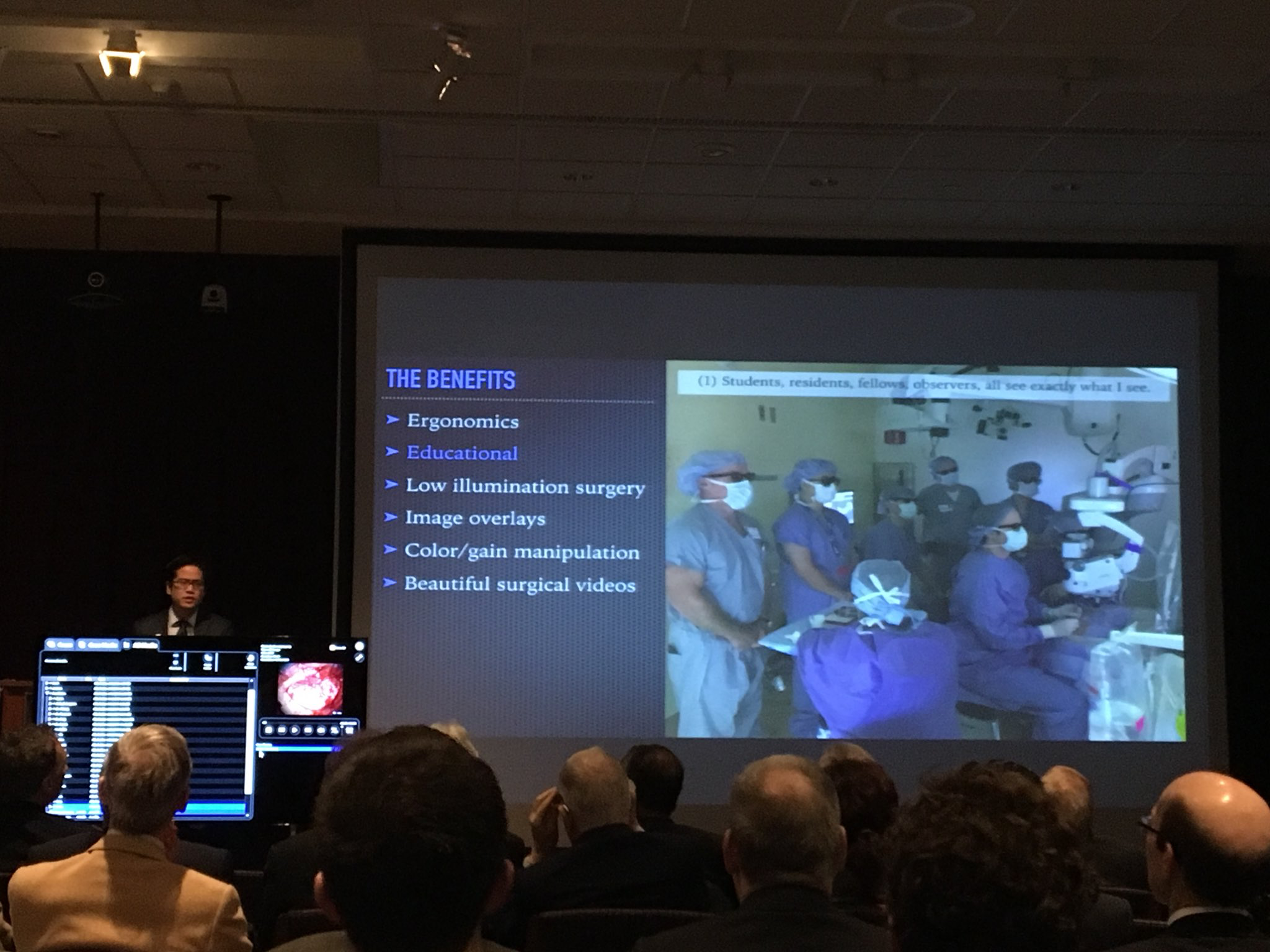 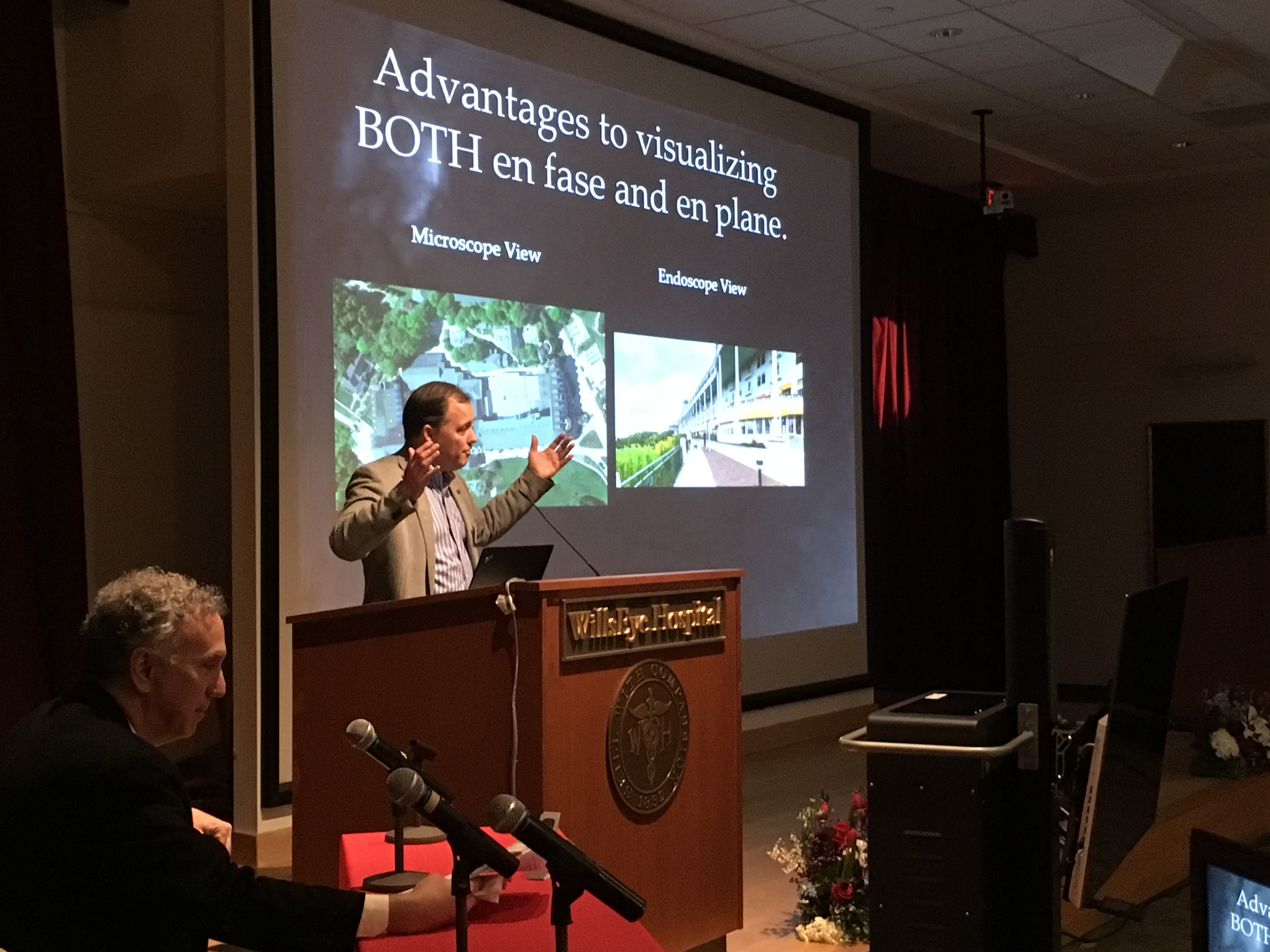 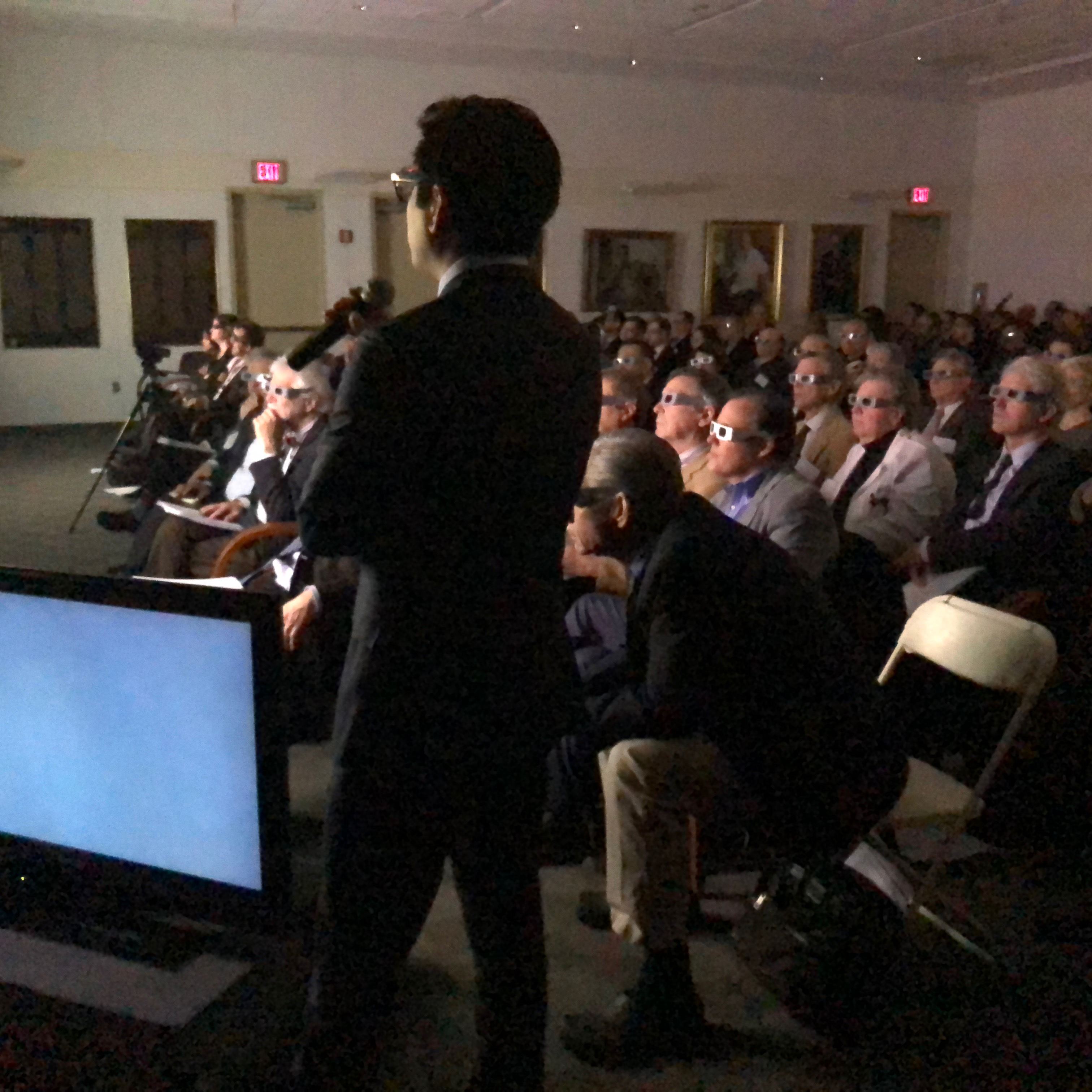 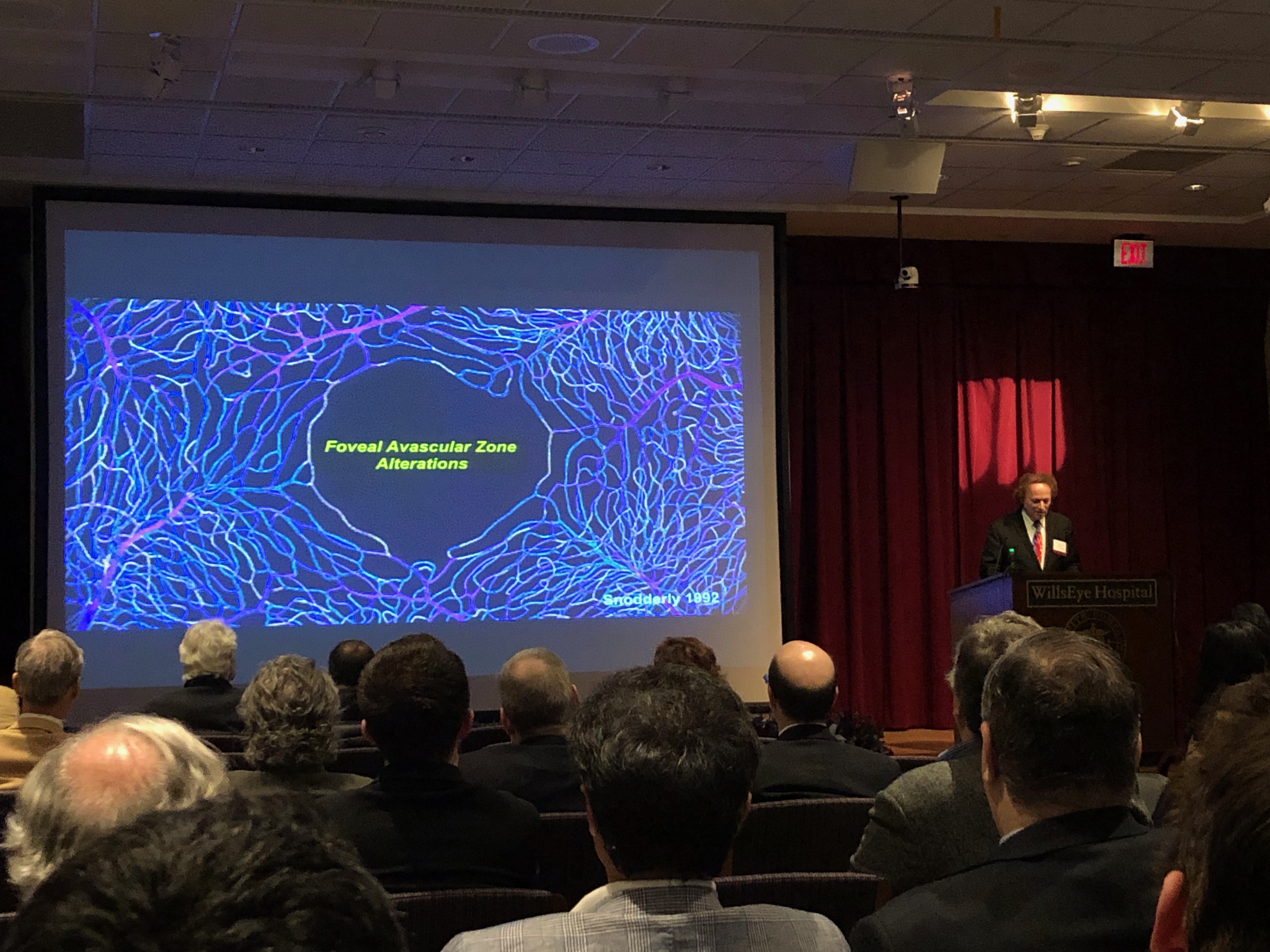 Dr. Richard Rosen of New York Eye and Ear Infirmary discussed advances in quantitative vascular mapping using OCT angiography
Unfortunately, the SPECTRI and CHROMA trials with lampalizumab did not meet clinical endpoints for reducing progression of geographic atrophy, but there is still ongoing research in other drugs altering the complement pathway. Dr. Jeffrey Heier of Ophthalmic Consultants of Boston reviewed the 12-month results for the FILLY study looking at the effect of ALP-2 on geographic atrophy progression in patients with dry AMD. APL-2 inhibits C3, a molecule involved in all three complement pathways. This phase II study compared APL-2 every month or every other month with sham treatment. There was a trend toward inhibiting geographic atrophy progression, especially in the 6 through 12 month post hoc analysis. There were concerns with adverse events, including higher rates of new onset wet AMD in the treatment groups.
Dr. Carl Regillo reviewed the phase III HAWK and HARRIER studies comparing brolucizumab to aflibercept in patients with wet AMD. Brolucizumab is a small, single-chain anti-VEGF antibody fragment that is half the size of ranibizumab and one-fourth the size of aflibercept with a similar binding affinity to aflibercept. The smaller size results in an increased molar concentration and can potentially provide a longer duration of action. The HAWK study randomized participants 1:1:1 to brolucizumab (3mg or 6 mg) every 4 weeks for 3 doses, then every 12 weeks or aflibercept every 4 weeks for 3 doses, then every 8 weeks. Brolucizumab was found to be non-inferior with respect to BCVA at 48 weeks and more than half of the participants in the brolucizumab arms were maintained on 12-week dosing. Central subfield thickness was also significantly better and there were 30% fewer participants with intraretinal- subretinal- or sub RPE fluid in the study arms. The drug is still awaiting FDA approval and it has yet to be priced. 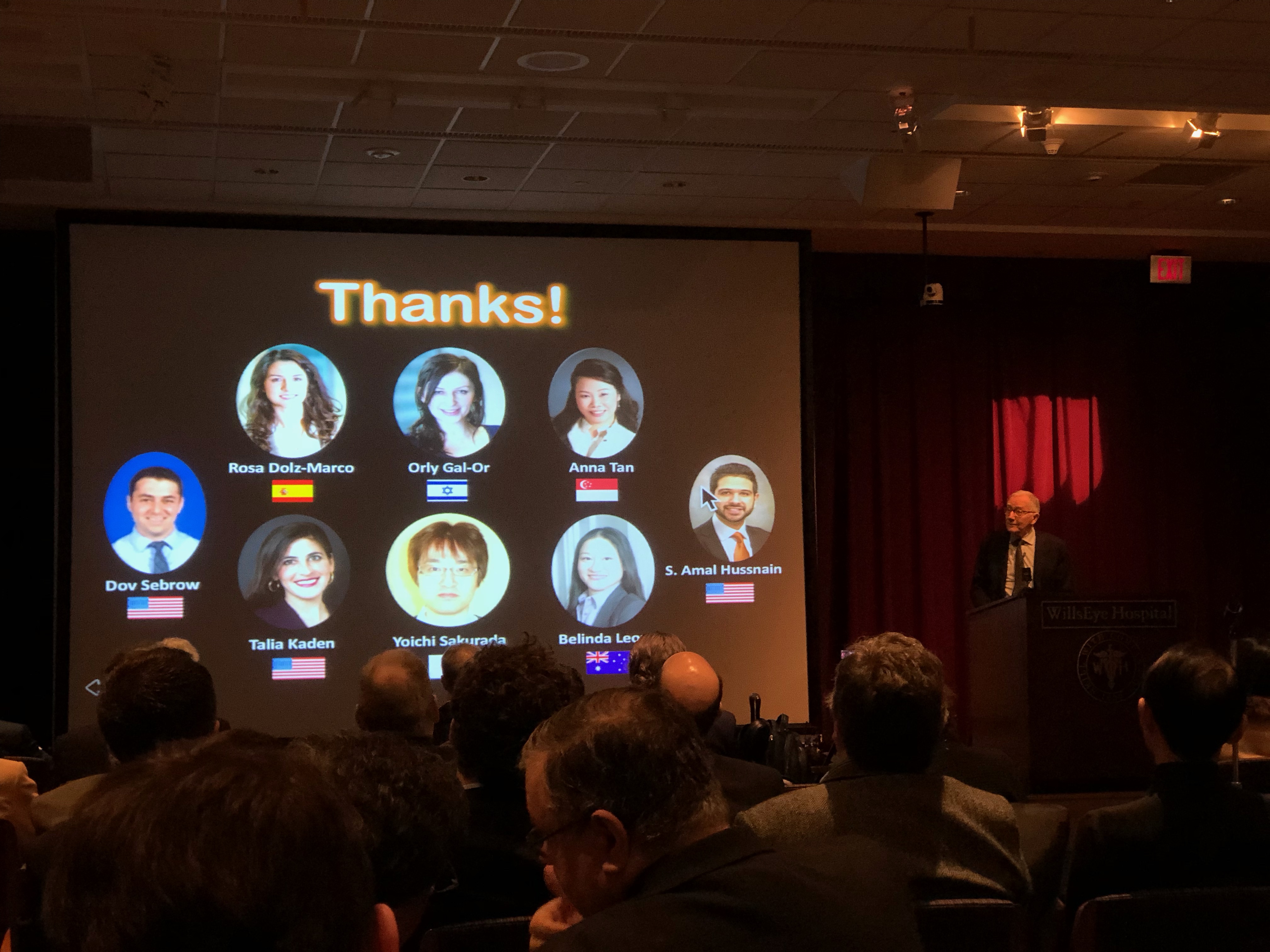 Course faculty and panelists Drs. Alexander Brucker, Allen Chiang, Carl Regillo, and Lawrence Yannuzzi
Dr. Neil Bressler of the Johns Hopkins Wilmer Eye Institute discussed the results of the DRCR.net Protocol U, which was published in print yesterday. The study originally included 236 eyes deemed to have “inadequate response” to anti-VEGF treatment who were randomized to a combination dexamethasone-ranibizumab or sham-ranibizumab after an additional 3 month anti-VEGF lead in. The study was designed to enroll pseudophakic patients only, but only 17 were enrolled in the first 18 months of the study, so enrollment was expanded to phakic patients as well. Only 129 were ultimately randomized due to additional improvement during the anti-VEGF lead in phase. There was no difference in change in BCVA in the dexamethasone-ranibizumab and sham-ranibizumab groups, though central subfield thickness was improved in the combination steroid group. There were higher rates of complications related to intraocular pressure in the steroid group. Unfortunately, the study was underpowered to determine if treatment response differed based on lens status. The conference finale was the reception honoring Dr. Jay Federman at the Museum of the American Revolution where Dr. Carl Regillo, Dr. Arunan Sivalingam, and Dr. Julia Haller recounted many inspiring stories from Dr. Federman’s impressive career, and the night was capped by a lively celebration with dancing into the night. 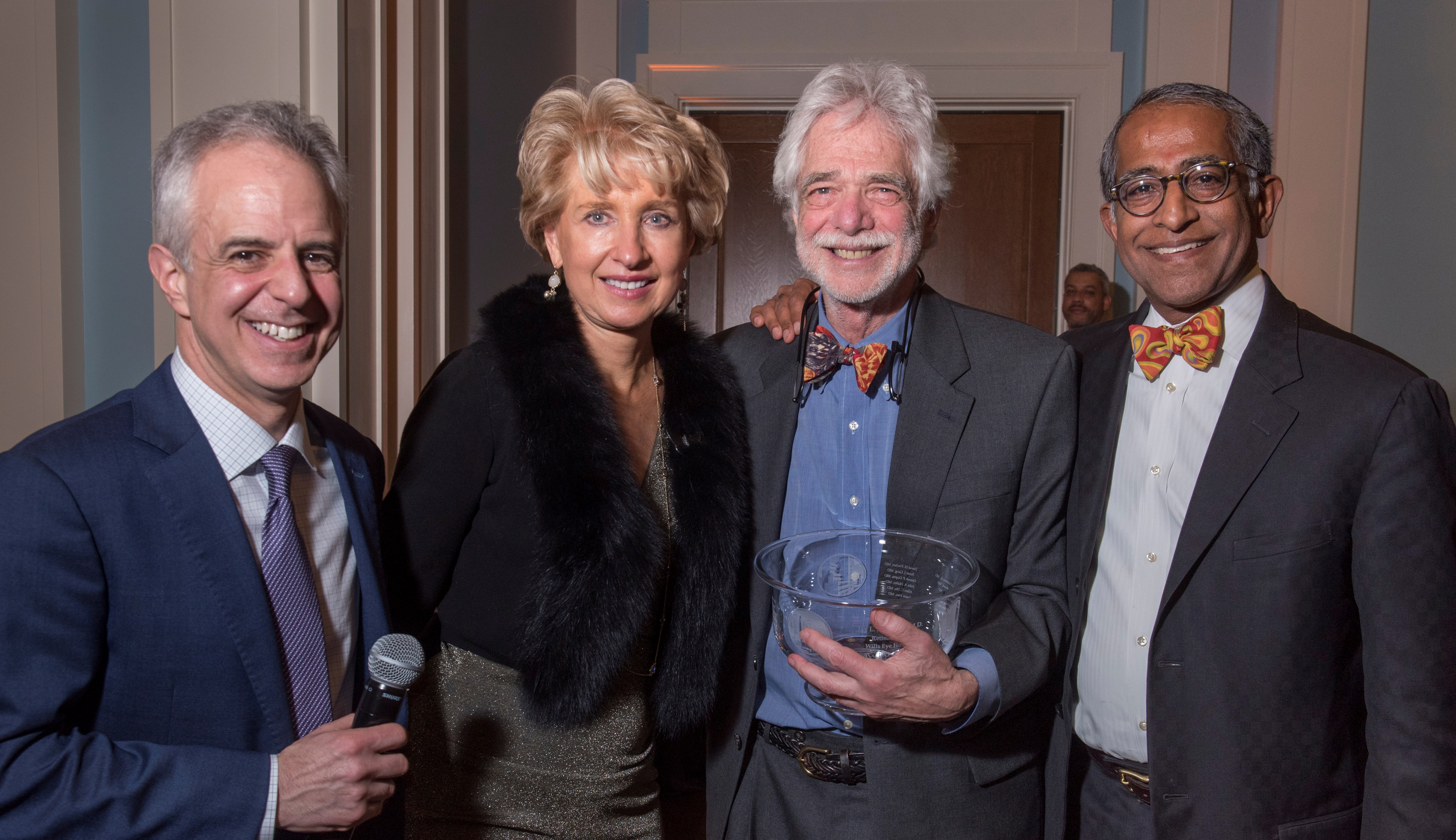 Dr. Jay Federman was awarded the beautiful Wills Eye Bowl in celebration of his illustrious career at Wills Eye from 1970 to 2018. (Photo Credit: Roger Barone) 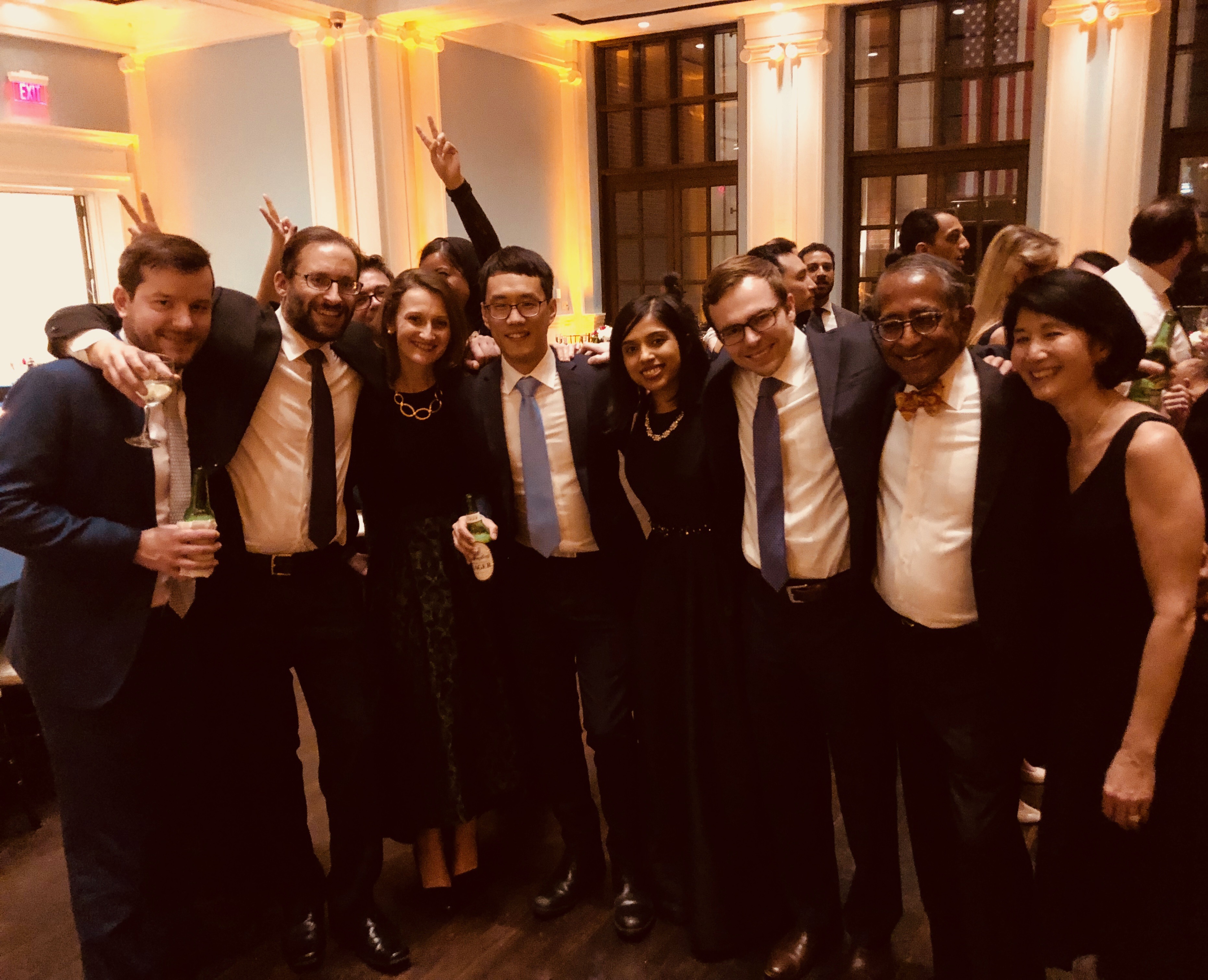 Dinner reception and party at the Museum of the American Revolution 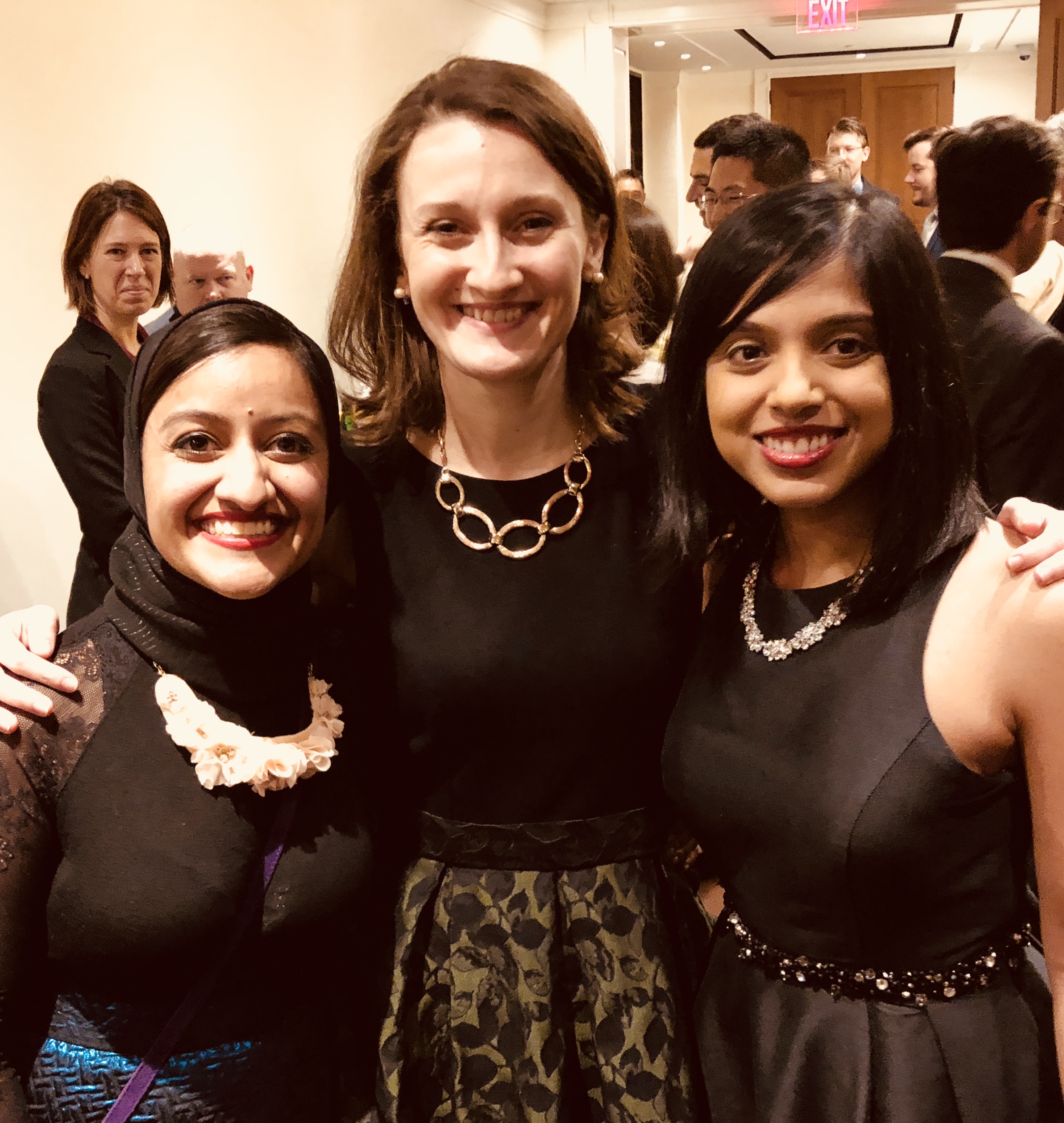