ASRS 2018: Social Media for the Retina Specialist - Dos and Don'ts

Rehan M. Hussain, MD Vitreoretinal Surgery Fellow Bascom Palmer Eye Institute The 51st annual Retina Society meeting in San Francisco kicked off on September 12th. One of the exciting sessions in the afternoon was a surgical videos section that showcased a variety of interesting cases. Dr. Christina Weng, Assistant Professor of Ophthalmology at Baylor College of Medicine presented “En Bloc Resection of a Retinal Capillary Hemangioma in Combined Tractional-Rhegmatogenous Retinal Detachment Repair.” She performed 23-gauge pars plana vitrectomy with the use of a chandelier light source to allow membrane peeling with a bimanual technique. She used 10-0 prolene sutures on a trimmed needle to isolate the feeder vessels of the hemangioma, tying a 2-1-1 knot to ligate them. Diathermy was applied distal to the knots and around the tumor. While retinal detachments caused by retinal capillary hemangiomas tend to be exudative or tractional, in this case there were several retinal breaks that were treated with endolaser. The patient had a negative systemic work-up for Von Hippel-Lindau syndrome, although genetic test is pending. [caption id="attachment_2447" align="alignnone" width="4032"] 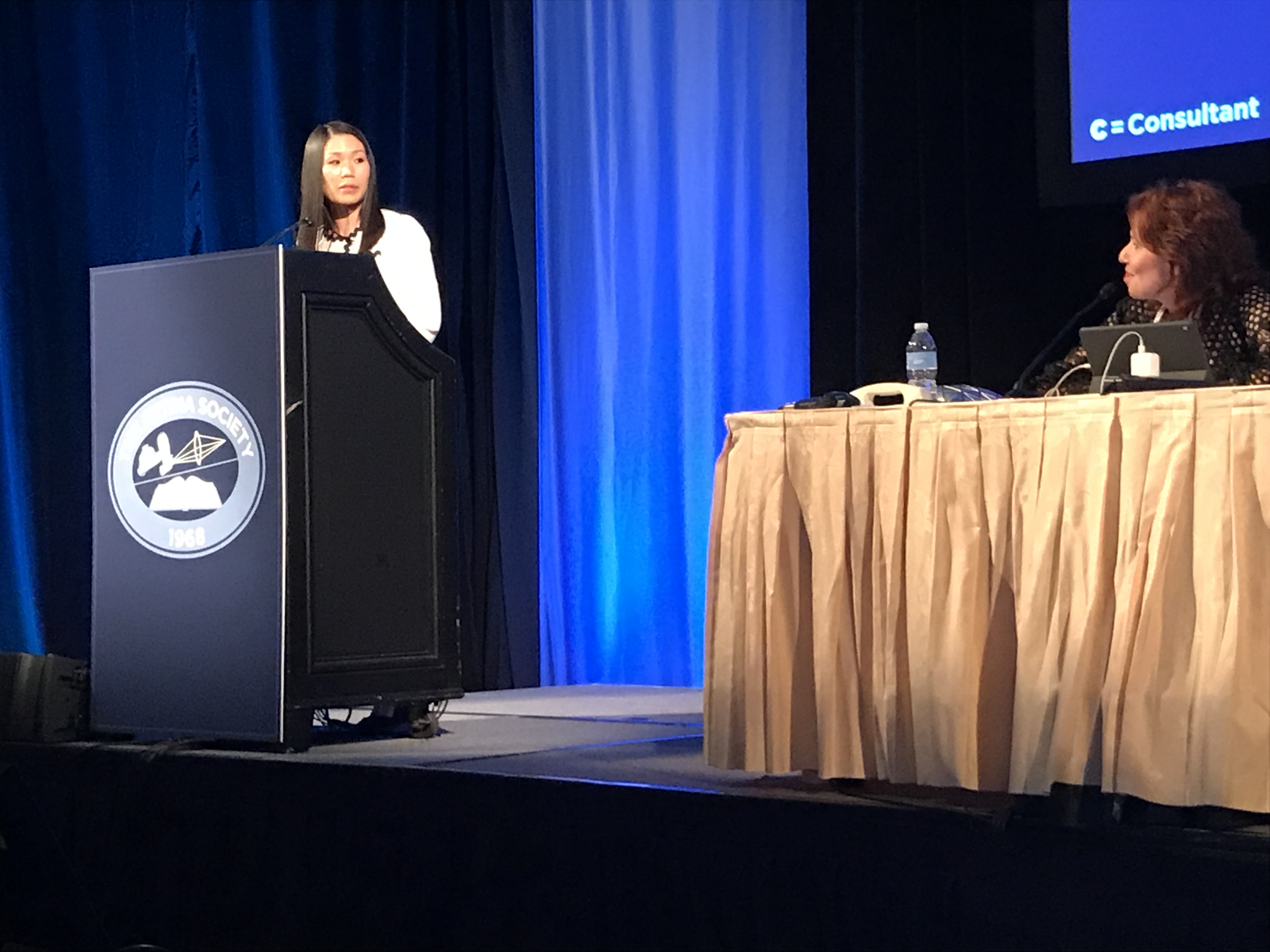 Christina Weng[/caption]
Dr. Felix Chau, Associate Professor of Ophthalmology at University of Illinois at Chicago - Illinois Eye and Ear Infirmary, presented “Perforating Intraocular Nail Injury: Vitreoretinal Surgical Repair.” The described patient was using a nail gun in a construction setting without protective eyewear when a 2-inch nail perforated his eye through the cornea, lens, retina, choroid, and posterior sclera, stopping in orbital fat. Treated with systemic antibiotics and tetanus prophylaxis, he was then transferrred to UIC-IEEI with hand motions vision. An orthopedic surgery pin cutter was first used to cut the external aspect of the nail. Vitrectomy was performed to clear out blood, lens particles, and vitreous, first through the limbus, and then converted to the pars plana when the view improved. When the nail was free of all significant adhesions, the intraocular pressure was then increased to 60 mmHg for hemostasis during subsequent nail removal. An MVR blade was used to expand one sclerotomy site and Neubauer intraocular forceps were inserted to remove the intraocular portion of the nail from the exit wound, while external forceps assisted in removing the nail from the corneal entry site. The posterior exit site was surrounded with endolaser and left to close without scleral sutures. The anterior wounds were closed with corneal nylon sutures and scleral vicryl sutures. Intravitreal antibiotics were injected into the vitreous cavity filled with balanced salt solution at completion of the case and oral moxifloxacin was administered for 14 days. Fortunately, there was no retinal detachment, and no damage to the optic nerve or macula. Four months later, after corneal sutures were removed, the patient had 20/25 visual acuity with use of an aphakic contact lens and glasses overrefraction.
[caption id="attachment_2448" align="alignnone" width="4032"]

Felix Chau[/caption] Dr. Rehan Hussain, vitreoretinal surgery fellow at Bascom Palmer Eye Institute, then presented “Primary Intraocular Lymphoma Presenting As a Posterior Capsule Plaque.” The patient was an elderly woman who presented with bilateral vitritis that was previously treated with diagnostic pars plana vitrectomies in each eye. The pathology results showed atypical lymphocytes, though the PCR results were not consistent with lymphoma. There was a T cell predominance, which is not characteristic of primary vitreoretinal lymphoma. Serial brain MRIs and lumbar punctures did not show evidence of CNS lymphoma, and the patient was then lost to follow up for almost 3 years. She later returned with a white plaque on the posterior capsule of her intraocular lens in the left eye. A repeat pars plana vitrectomy was performed. Due to the poor view, a 6 mm infusion cannula was placed to ensure its location in the vitreous cavity. Air infused the eye instead of saline in order ensure collection of a non-dilute sample. The vitrector circled around the posterior capsule to collect the specimen. The vitreous cavity was noted to be free of vitreous cells after the view had improved. The pathologist confirmed the diagnosis of diffuse large B cell lymphoma. [caption id="attachment_2452" align="alignnone" width="960"] 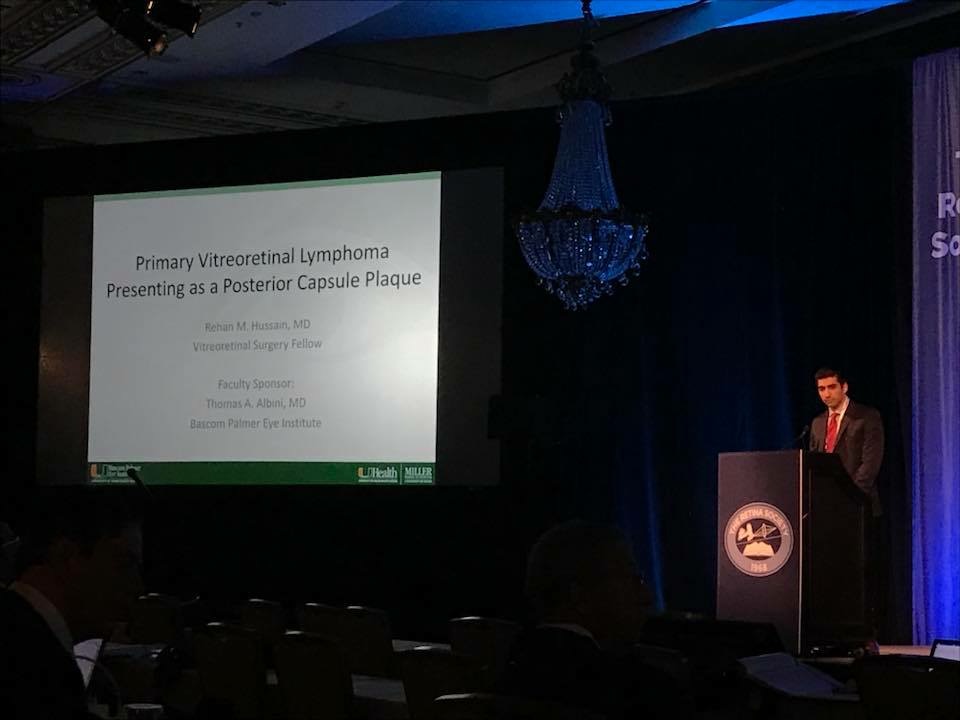 Rehan Hussain[/caption] Dr. Robert Sisk, Associate Professor of Ophthalmology at University of Cincinnati presented “Surgical Drainage of a Bullous Pigment Epithelial Detachment (PED)” in a patient with a choroidal neovascular membrane. He performed pars plana vitrectomy, while also removing a dexamethasone intravitreal implant that was already in the vitreous cavity but deemed to not have clinical benefit to the patient. A retinotomy was created close to the bullous PED and a 23-gauge soft tip cannula was used to drain subretinal fluid from the PED. The postoperative visual acuity was restored to 20/30. Dr. Sisk concluded that PEDs can be successfully drained without hemorrhagic complications, though long term success depends on control of the choroidal neovascular membrane. [caption id="attachment_2449" align="alignnone" width="4032"] 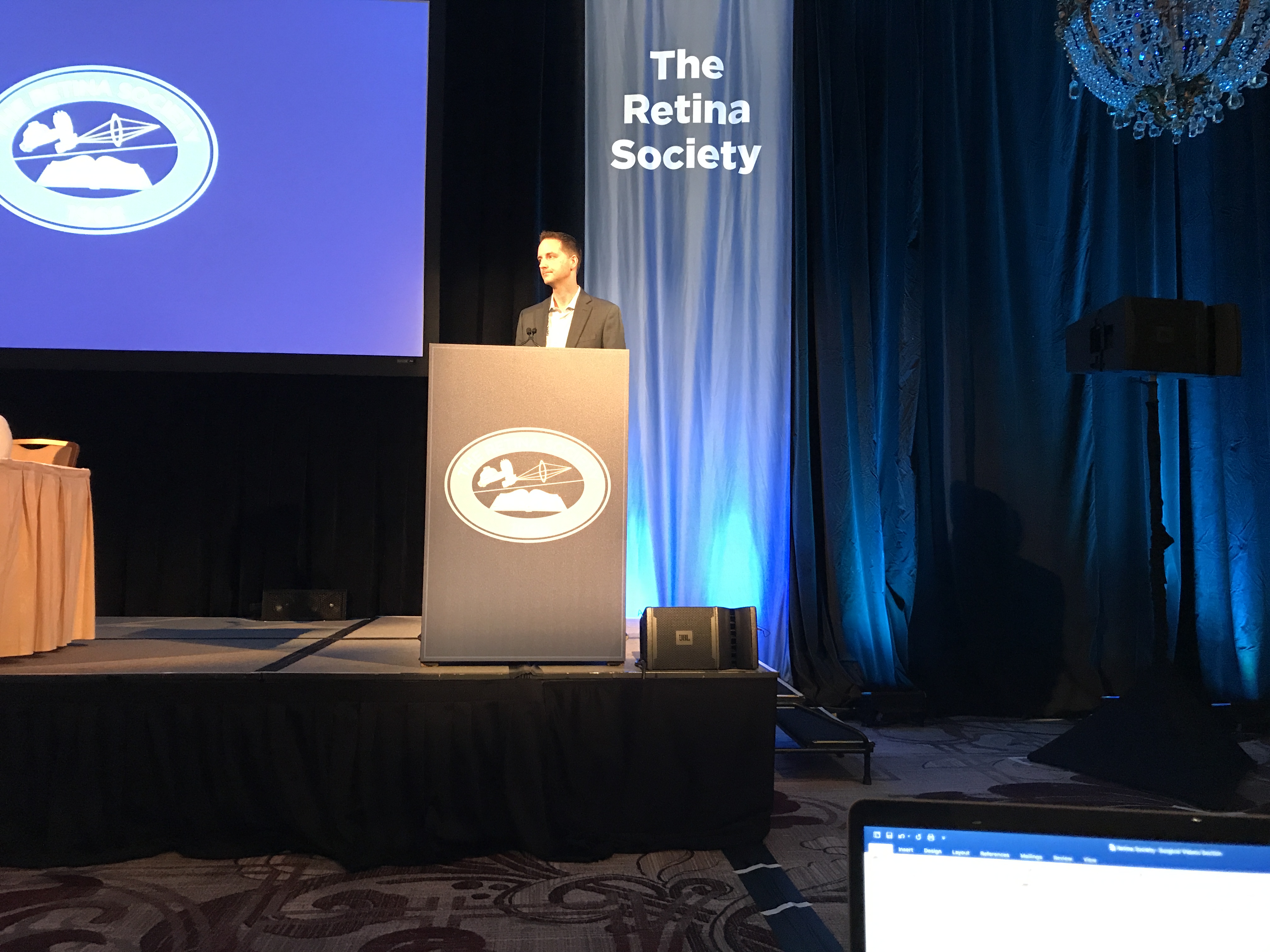 Robert Sisk[/caption] Dr. Yannek Leiderman, Associate Professor of Ophthalmology at University of Illinois Chicago presented “Surgical Intervention of Refractory Optic Pit Maculopathy Using Fibrin Sealant.” He has performed a total of 9 surgeries for optic pit maculopathy, and used fibrin sealant in 3 cases with success. He performs pars plana vitrectomy, elevates the hyaloid, and severs the vitreous-to pit-flap. He peels the cortical vitreous and internal limiting membrane. The challenge in these cases is that when fluid-air exchange is performed, fluid reaccumulates rapidly through the optic pit and causes retinal detachment. Fibrin sealant can be used to interrupt the connection, and is especially useful for reoperations or when there is an absent pit-flap or vitreous stalk. The sealant works best over a dry field, so he continues to drain as much as fluid possible to allow fibrin formation. An ILM flap is tethered to the optic nerve head to decrease fluid flow. He lasered the area away from the papillomacular bundle to create an adhesion between the retina and retinal pigment epithelium. He avoids use of silicone oil in these cases, as it can potentially migrate into the optic pit. [caption id="attachment_2450" align="alignnone" width="4032"] 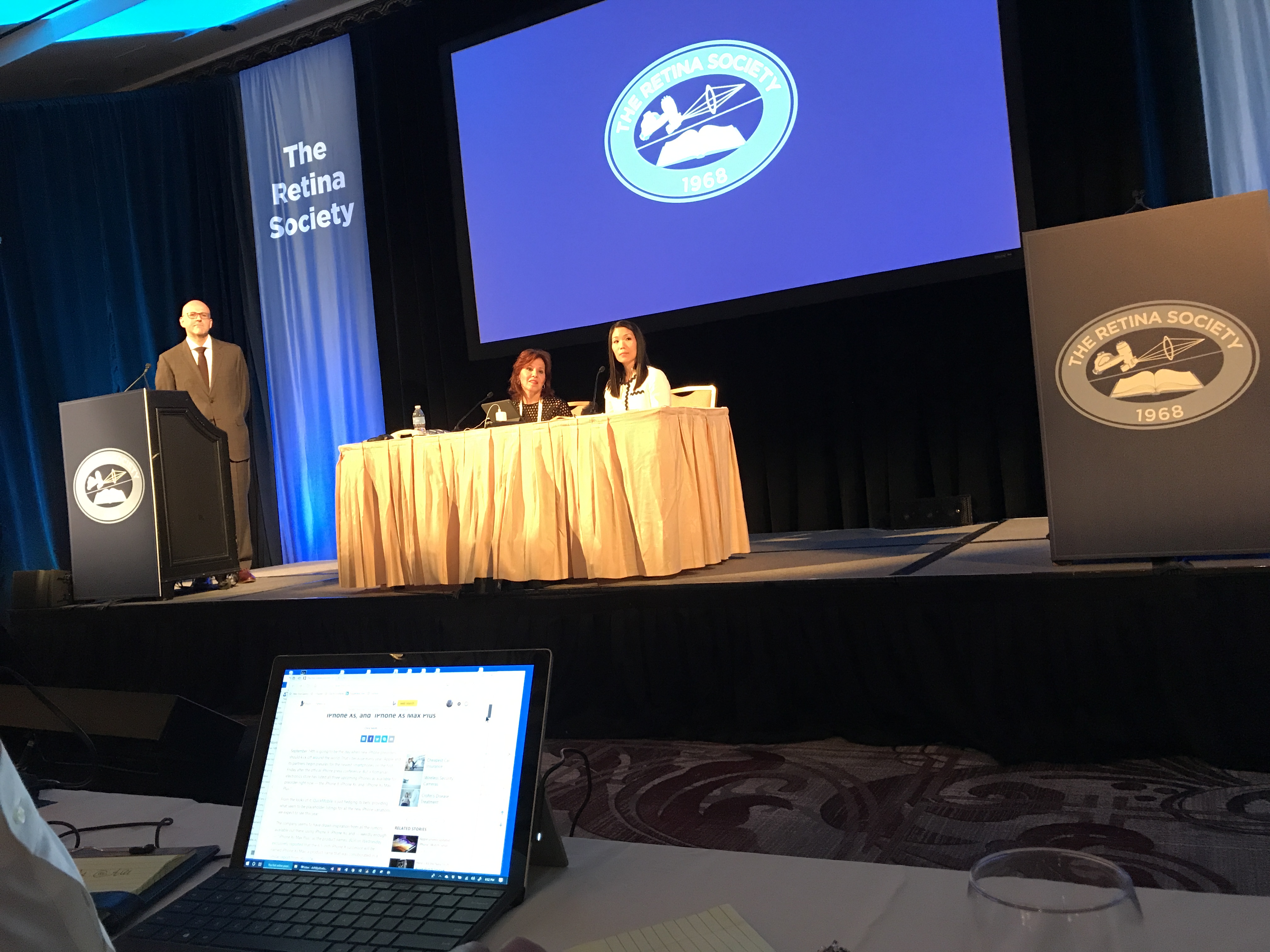 Yannek Leiderman[/caption] Dr. Maria Berrocal of Berrocal and Associates in Puerto Rico presented on “Techniques of Macular Hole Surgery with Internal Limiting Membrane (ILM) Flaps.” She described an inverted ILM flap technique with use of autologous blood, which did not require intraocular gas tamponade or facedown positioning. This is especially useful in very large myopic holes and myopic holes associated with retinal detachments, in which a 100% hole closure rate has been reported. She performs pars plana vitrectomy, staining the vitreous with triamcinolone and the ILM with brilliant blue. She uses a Finesse Flex Loop to create an ILM flap and then peels the residual ILM with the vitrector on aspiration mode. She then performs fluid-air exchange. The anesthesiologist removes a small sample of blood from the patient’s vein and Dr. Berrocal instills a drop of the autologous blood on the macular hole. The autologous blood helps secure the ILM flap in place, and is ideal for non-temporal flaps, free ILM, and lens capsule flaps. She suggests that the blood factors may have a potential benefit in macular hole closure, though visual acuity outcomes are not significantly better than conventional techniques of ILM peeling. Nonetheless, this technique deserves further exploration due its ability to reduce need for intraocular gas tamponade and face down positioning. [caption id="attachment_2451" align="alignnone" width="4032"] 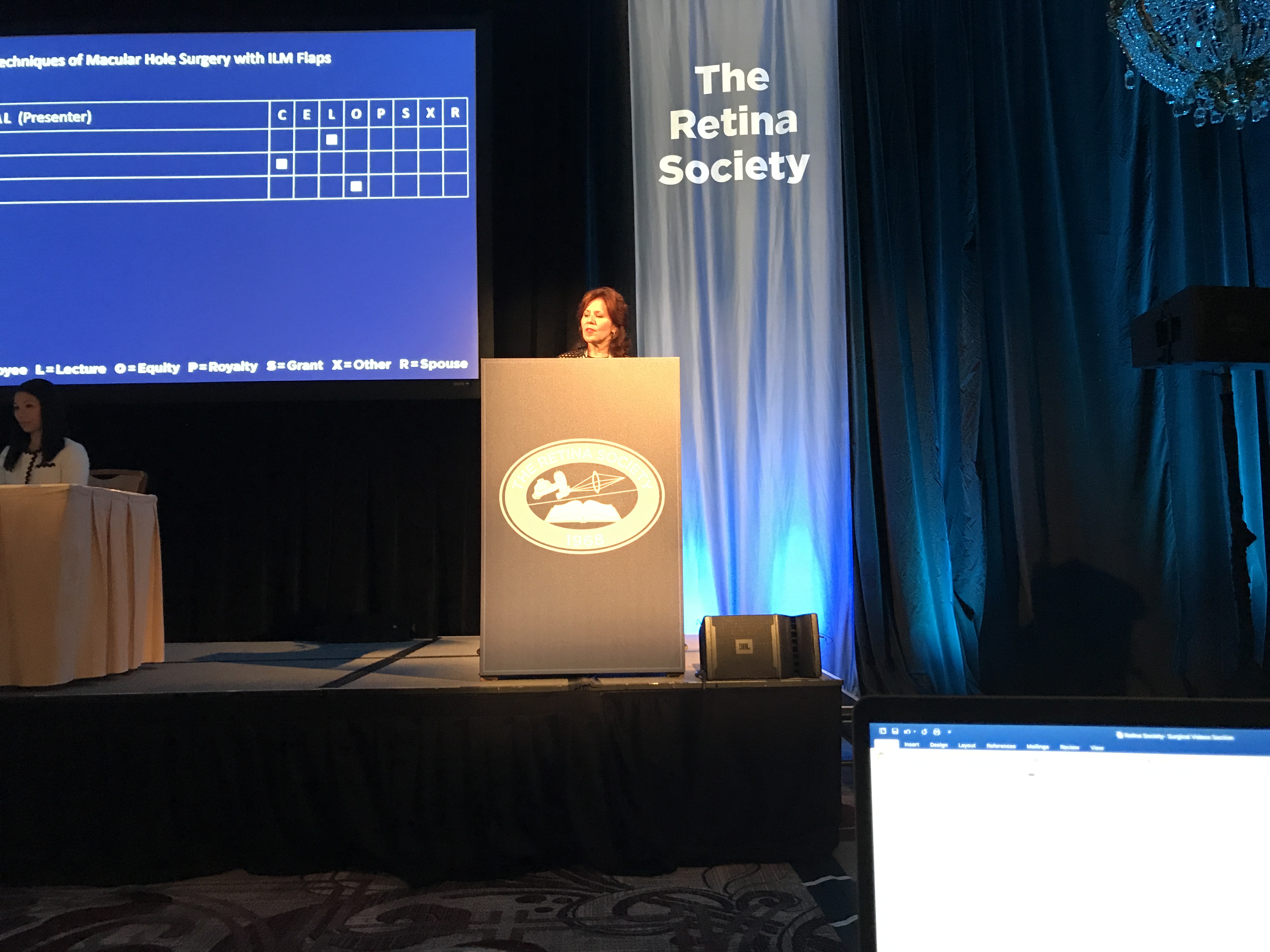