Yoshihiro Yonekawa, MD Mass Eye & Ear / Boston Children's RETINA Roundup Co-Editor The age-related macular degeneration (AMD) session at Retina Society is always jam-packed. Patients with AMD comprise a large portion of our waiting rooms, and between neovascular and non-neovascular AMD, it continues to be arguably the hottest topic in our field. The AMD session at Retina Society 2018 comprised of 13 exciting talks moderated by Drs. Vas Sadda and David Brown. This was an extensive session with many important data to cover, so the session coverage will be divided into 2 separate posts. Here are summaries of the first 5 talks: Clement Chan, MD: PREVENT study Dr. Chan from Southern California Desert Retina Consultants presented the interim results of PREVENT, a phase I/II, prospective investigator initiated industry sponsored study examining prophylactic ranibizumab for high risk dry AMD in the fellow eyes of patients with neovascular AMD. Historically, the MPS study showed 26% fellow eye conversion to neovascular AMD within 5 years, so this is a significant number of patients who may potentially benefit from this new, thought-provoking treatment paradigm. As Dr. Chang mentions, the invasive nature and possible association of repeated anti-VEGF injections and geographic atrophy (GA) needs to be balanced (18% developed GA in the 2-year CATT data). The study defined "high risk" as one or more large drusen and pigmentaary changes in the fellow eyes of patients with neovascular AMD. Patients were randomized to undergo sham injections, or prophylactic ranibizumab injections every 3 months. UC Davis was the reading center. The primary outcome was conversion to neovascular AMD. All patients are now enrolled, but 63% have not completed the full followup period - so this was the interim results from 37% of the cohort. Baseline visual acuities were similar between the two groups. So far, 7.4% of fellow eyes have converted to neovascular AMD. 5.6% in the ranibizumab group, and 9.3% in the sham group. The number needed to treat was 27. We look forward to the final data to better understand this intriguing concept. [caption id="attachment_2470" align="alignnone" width="4032"]

Dr. Clement Chan[/caption] Vas Sadda, MD: New OCTA imaging technique of the choriocapillaris Dr. Sadda from Doheny Eye Institute presented data on a new OCTA technique for topographic analysis of the choriocapillaris. Current OCTA images of the choriocapillaris are grainy with substantial noise. In eyes with AMD, projection artifact from retinal vasculature and shadowing by drusen are major limitations. One option is to just ignore the areas under vessels and drusen and focus on artifact-free regions. But ideally we should examine the entire macula, which would also permit analysis of the relation between drusen and the choriocapillaris. Recent studies by Dr. Amani Fawzi showed that even with swept source OCTA there is signal loss under the drusen. Dr. Philip Rosenfeld's team recently showed that signal alterations under the drusen on structural OCT could be used to determine how the sub-drusen signals on OCTA can be compensated for. Dr. Sadda averaged many of these images to allow enhanced appreciation of the capillary architecture. His group found that in eyes with intermediate non-neovascular AMD, there were more flow deficits under the drusen than previously appreciated on OCTA. Causality will have to be examined with future studies, but his study suggested that there are significant alterations of the choriocapillaris under drusen. [caption id="attachment_2471" align="alignnone" width="4032"] 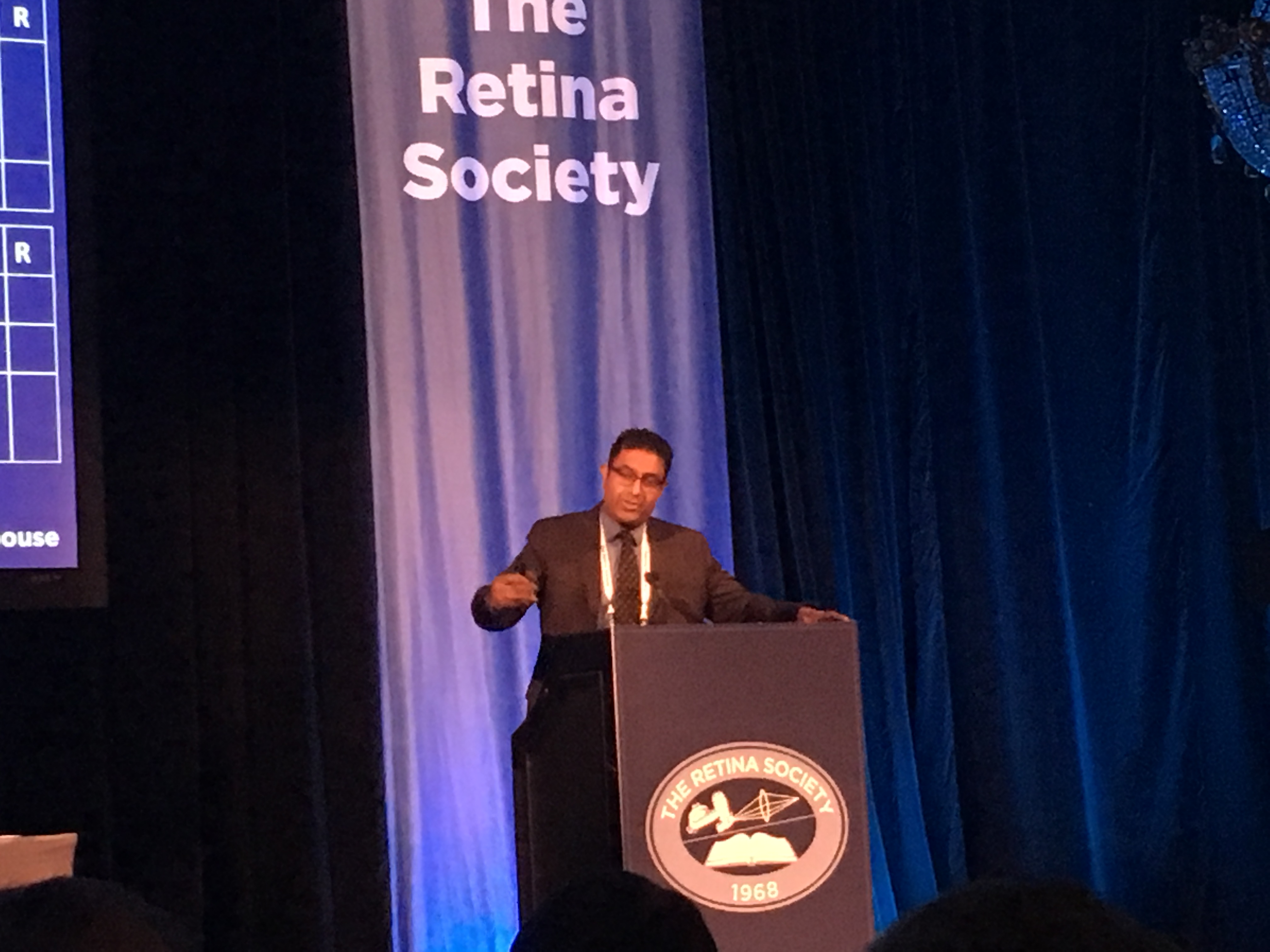 Dr. Vas Sadda[/caption] David Brown, MD: FILLY trial Dr. Brown from Retina Consultants of Houston presented the 18 months results of the FILLY trial from Apellis Pharmaceuticals. The study examined the effects of APL-22, a complement C3 inhibitor, on geographic atrophy. The complement system is well known to be involved in AMD. APL-2 blocks C3 upstream in the pathway, which results in downregulation of C5 as well. Patients with geographic atrophy 1-7 disc diameters in size, were randomized to: monthly intravitreal injections, injections every other month, or sham. The primary endpoint was growth of geographic atrophy as seen on autofluorescence imaging. Injections were stopped at 12 months, and followup continued without treatment, and the data were analyzed at 18 months. One notable difference with prior geographic atrophy trials, was that neovascular AMD in the fellow eye was permitted. APL-2 met the primary endpoint at 12 months. The rate of growth of geographic atrophy was reduced by 29% in the monthly arm, and 20% in the every other month arm, both statistically significant. Interestingly, the investigators observed more reduction of the growth rate during the second half of the first year. After cessation of treatment and during the observation period between 12 and 18 months, the differences in the growth rate persisted between the arms, but the lesions resumed the growth rate similar to the sham eyes' growth rate. This implies that continued treatment may be required. One concern was that there were increased rates of neovascular conversion in the treatment arms: 1% in sham, 8.9 in every other month, and 20.9% in the monthly arm. There rates were even higher if fellow eyes had neovascular AMD (four times more likely). Two global Phase III studies are now underway. There were several questions from the audience: 1) Did the study perform high risk allele analysis? This was not performed prospectively. 2) Why was the neovascular conversion rate so high? In the Phase III trials, OCTA will be used to examine for baseline indolent neovascular membranes to exclude such patients. 3) Is the neovascular conversion rate something to be concerned about? This will certainly be an important factor to monitor. 4) The rates of endophthalmitis were higher in the treatment arms. Does complement inhibition play a role in this finding? This is unknown at this time, and may have been by chance, but will have to be examined in future studies. [caption id="attachment_2472" align="alignnone" width="4032"]

Dr. David Brown[/caption] Steven Bailey, MD: Nonexudative CNVM Dr. Bailey from Casey Eye Insitute presented data on OCTA detection of nonexudative choroidal neovascular membranes (CNVM), in eyes with AMD. He presented data from a prospective study that examined patients with non-neovascular AMD every 6 months with OCTA for 24 months. 65 patients were enrolled, 2 were excluded for poor image quality, and 15 were lost to follow-up. Mean age was 78 years. There were five patients with non-exudative CNVM at baseline (8%). Of the 48 eyes with 2 years of complete follow-up, there were 10 that had/developed non-exudative CNVM. Of the 10, 8 developed exudation. All had type 1 CNV except one eye with type 3 CNVM. Most eyes did not lose vision when conversion took place. On average, the time between identification of nonexudative CNVM and exudation was 8 months. Dr. Bailey posed the question of whether we should be treating these nonexudative CNVM lesions or not. For now, monthly follow-up was recommended due to the high likelihood of exudation. A treatment study may be warranted. Audience members asked whether these indolent, non-exudative CNVMs can be detected on structural SD-OCT. Dr. Bailey commented that most eyes did have changes on the structural OCT, such as the double layer sign, but that it did help to have the OCTA images to confirm. [caption id="attachment_2473" align="alignnone" width="4032"] 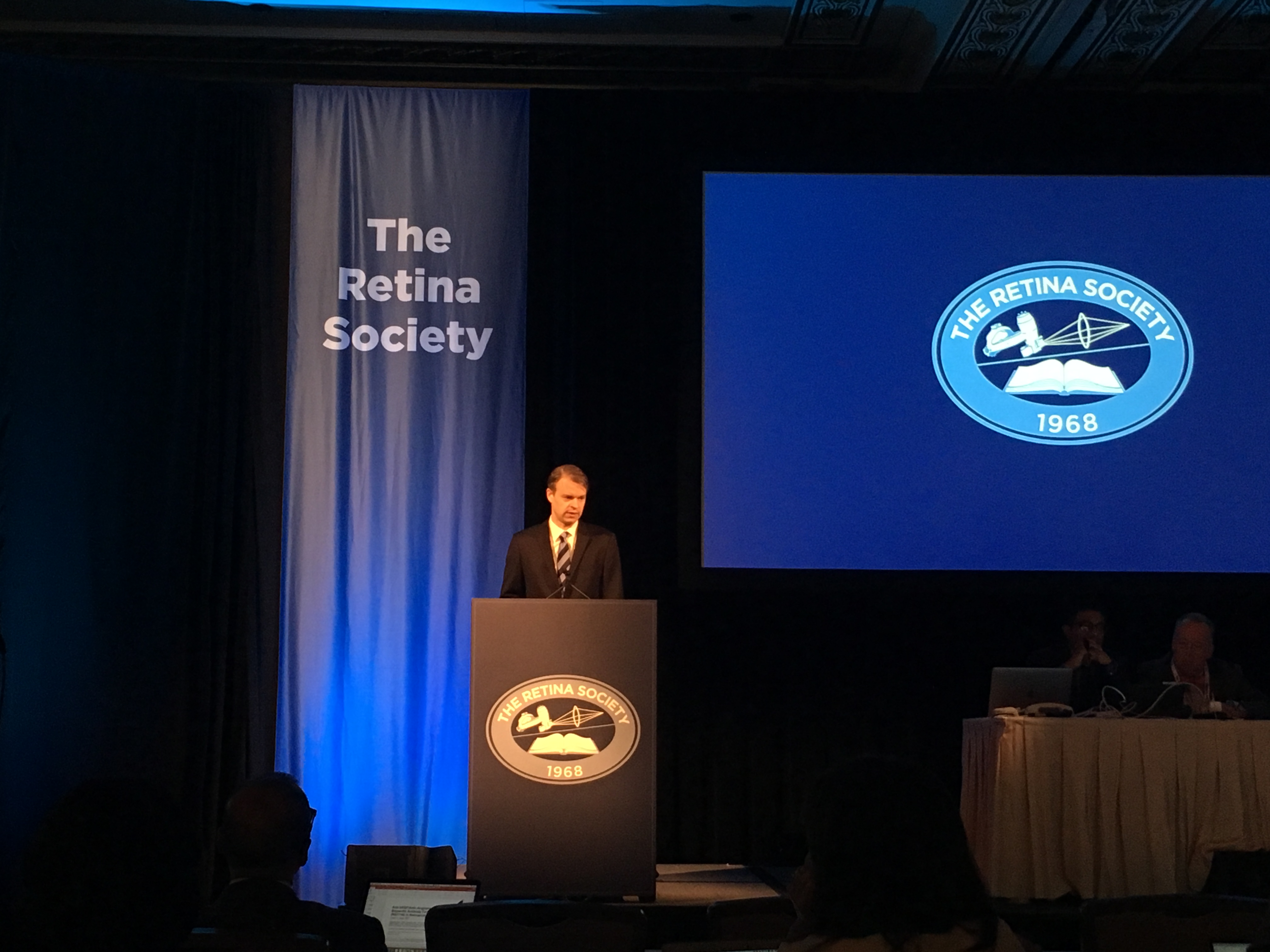 Dr. Steven Bailey[/caption] Pravin Dugel, MD: AVENUE and STAIRWAY trials Dr. Dugel from Retina Consultants of Arizona presented data from the AVENUE and STAIRWAY trials, which examine RG7716, a bispecific antibody against both VEGF-A and Ang-2 for neovascular AMD. This was the first time these data were presented. RG7716, or faricimab, is the first bispecific antibody designed for intraocular use. "Bispecific" means that a single molecule is designed to target two ligands, rather than a combination drug. The compound has an anti-VEGF-A Fab, and an anti-Ang-2 Fab, connected to an optimized Fc portion. Genentech is conducting several trials for faricimab: AVENUE and STAIRWAY for neovascular AMD, and BOULEVARD for diabetic macular edema. Ang-2 signaling is associated with retinal vascular destabilization and retinal microvascular inflammation, and is elevated in eyes with neovascular AMD. AVENUE is a Phase II study that enrolled 273 patients in a multicenter randomized comparator controlled parallel group clinical trial. The arms were 6 mg of faricimab (one arm every 4 weeks, another arm every 8 weeks), 1.5 mg faricimab, 0.5 mg ranibizumab, and sham. At 36 weeks, the study met its non-inferiority outcomes for vision and central retinal thickness. STAIRWAY is another Phase II study that enrolled 76 patients and examined longer treatment intervals. The arms were 6 mg faricimab every 16 weeks after initial loading injections, every 12 weeks after loading , or 0.5 mg ranibizumab. Pre-specified measures of disease activity were assessed at 24 weeks. 65% of eyes achieved no activity at week 24 in the 16-week dosing arm. More detailed data will be presented during this year's AAO subspecialty day. There was a question from the audience asking whether there were any indications in the data from either trial showing that faricimab was superior in any visual or anatomic aspect in comparison to monthly ranibizumab. Dr. Dugel indicated that these were non-inferiority trials so the primary outcomes were not designed to assess for superiority, but that there may be some signals indicating such. We look forward to further presentations from the investigators. [caption id="attachment_2475" align="alignnone" width="4032"] 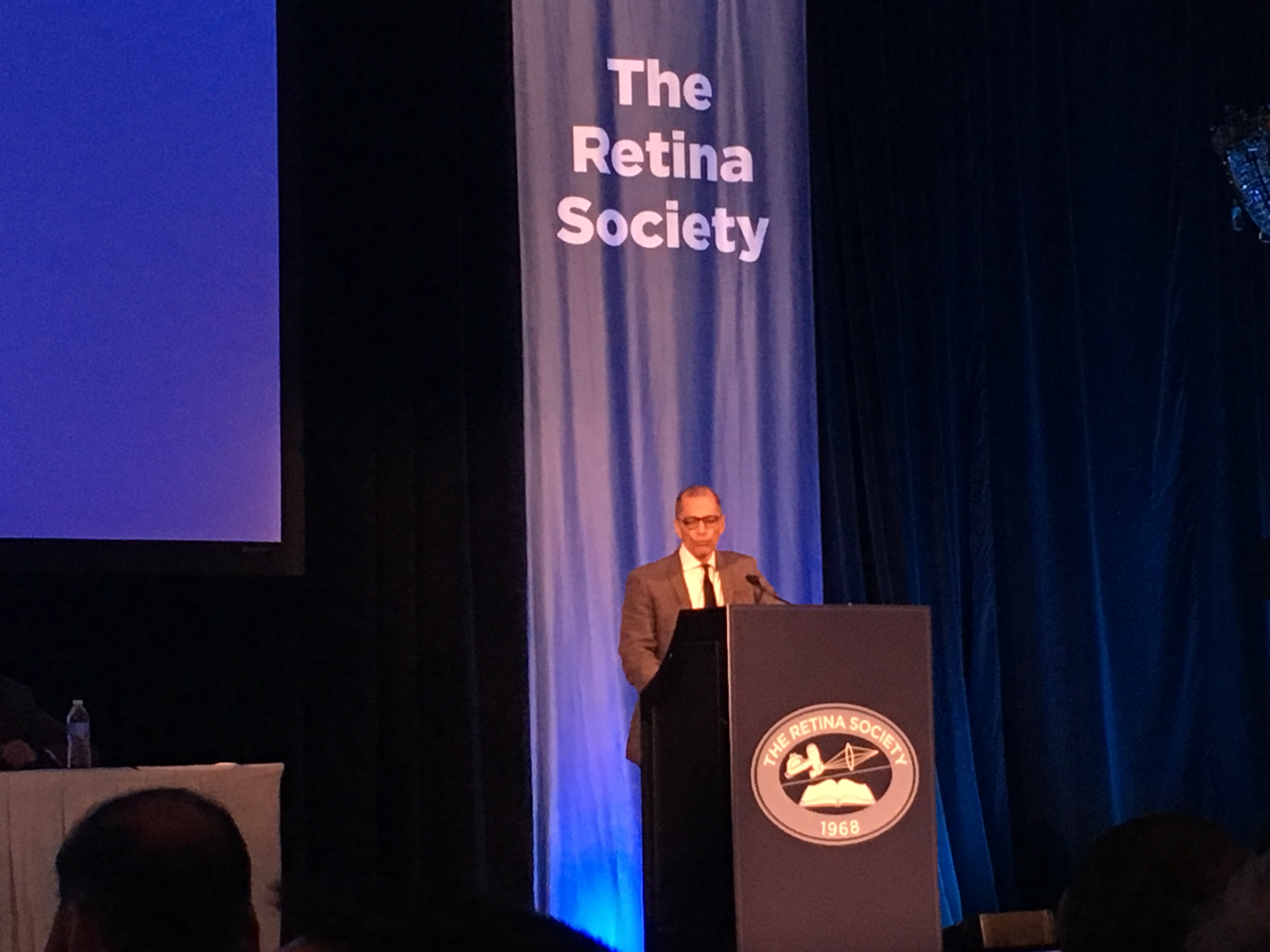