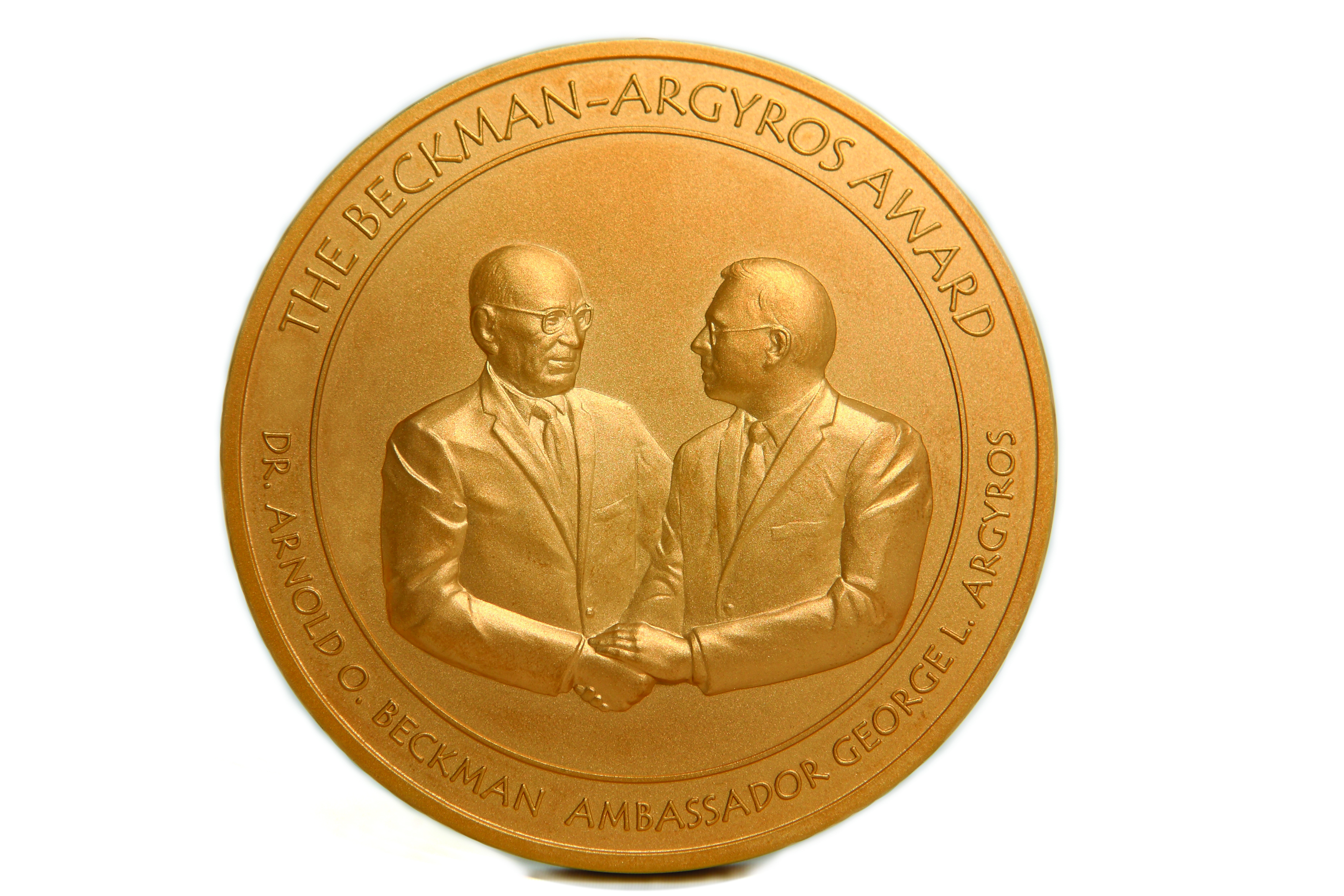 Zujaja Tauqeer, DPhil 4th Year Medical Student Harvard Medical School The penultimate award lecture of this year’s ARVO conference in Honolulu was given by James Fujimoto, PhD, the Elihu Thomson Professor of Electrical Engineering at Massachusetts Institute of Technology (MIT). Dr. Fujimoto received the Beckman-Argyros Prize for Vision Research for pioneering the development and application of optical coherence tomography (OCT).
The prize for breakthroughs in vision research comes with a solid gold medal that commemorates the decades-long friendship between Dr. Arnold Beckman and Ambassador George Argyros. Image Source This year’s lecture discussed the history and evolution of OCT from fundamental research to clinical practice, highlighting the essential role that basic scientists and engineers play in patient care as well as the transformative impact in scientific research made by trainees and early career professionals. OCT was born in the halls of AT&T Bell Laboratories where Michael Duguay first used ultrahigh speed photography to capture “light in flight” in 1971. Dr. Fujimoto cut his own teeth as a doctoral student working on ultrafast phenomena while at MIT, working on femtosecond optics and later studying diagnostic possibilities of femtosecond laser technology in trying to “see inside” tissue. 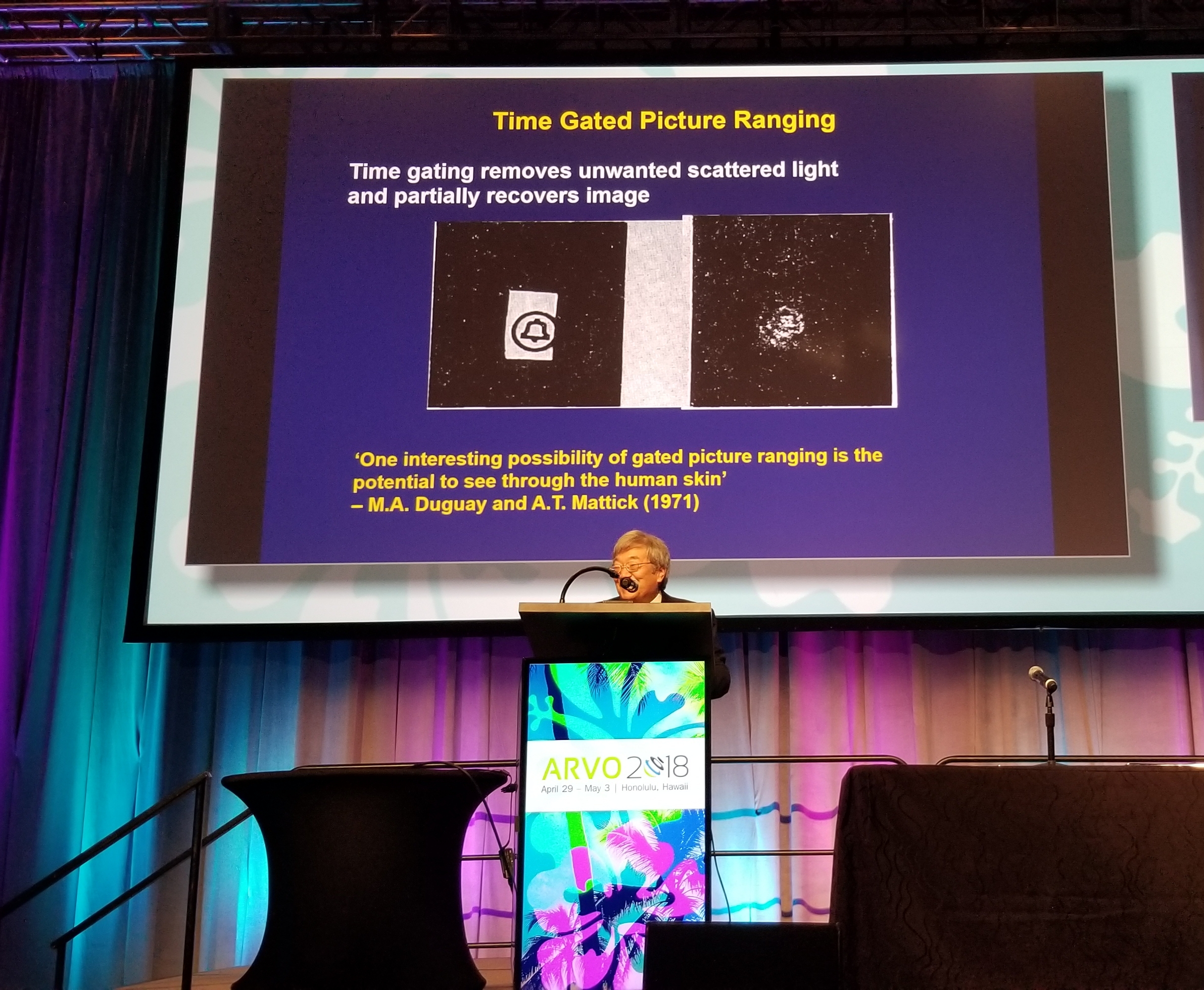 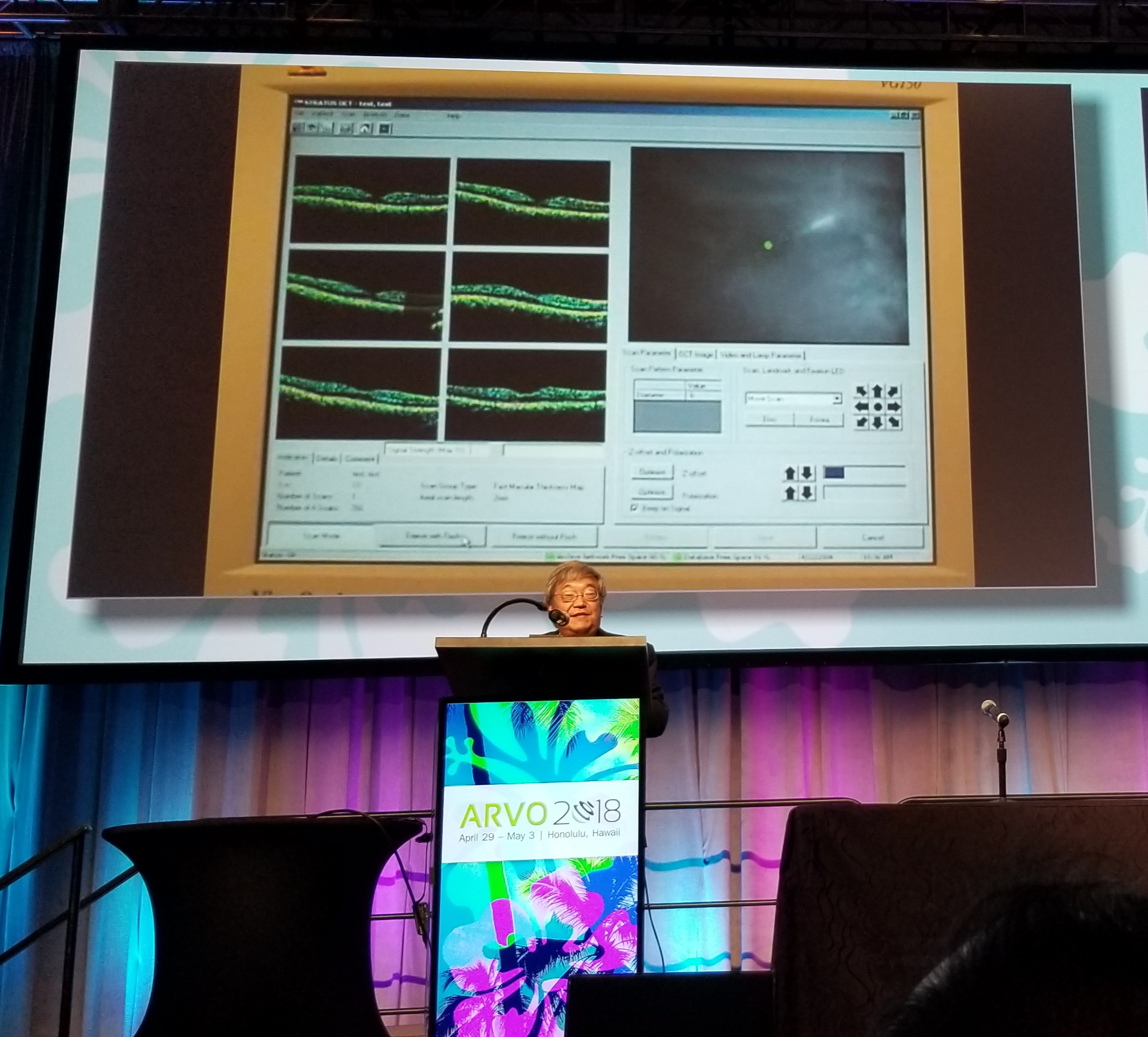 Dr. Fujimoto’s work then progressed to using low coherence interferometry, first described by Sir Isaac Newton. David Huang, then an MD/PhD student in his lab, worked on low-coherence interferometry and ultimately demonstrated its use in the eye by performing an A-scan of the anterior chamber of an ex vivo bovine eye. Huang showed that multiple A-scans could be displayed as a false color or gray scale image (B-scan). This was the first use of OCT retinal imaging—and by a student at that. Interestingly, it was the work of advanced engineering and basic science that propelled OCT to the clinic. Dr. Fujimoto’s lab began collaborating with Eric Swanson at MIT Lincoln Labs, which specialized in developing advanced technology for the US Department of Defense. This collaboration led to a design with increased imaging speed and a portable interface that was feasible for the clinic. Then, Michael Hee, another MD/PhD student, helped advance OCT into the next frontier by taking the first in vivo retinal images. Hee also developed many of the early examination protocols that became standard for OCT imaging of the eye. Carmen Puliafito, another collaborator who was then at Massachusetts Eye and Ear Infirmary in Boston, further helped in the effort to translate this technology from the engineering labs to the clinical community by performing the first studies of retinal disease and publishing an atlas that provided reference OCT images for known ophthalmic diagnoses. However, as Dr. Fujimoto’s narrative made clear, widespread clinical impact from OCT technology would not have been possible without industry involvement. He recounted the critical decision of John Moore, then president of Zeiss, to invest in the development of OCT. In 1996, Zeiss released its first commercial OCT unit, however the road to acceptance was long with only 180 units sold in 1999 and 400 in 2001. The advent of spectral Fourier domain detection further improved speed and sensitivity. One could now generate en face images of the retina in different planes and register cross-sectional images with fundus features. With ultrahigh speeds, functional measurements were possible—volumetric imaging, doppler OCT, and OCT angiography (OCTA). Key advances were made at Bascom Palmer towards mapping RPE and outer retinal features that allowed quantification of focal pathologies which occur across a wide area of the retina. A comparison of the earliest OCT interface (above) with a recent spectral-domain interface (bottom) shows the dramatic improvements made possible with high speeds and sensitivities. Acceptance of OCT was finally demonstrated with a vengeance at the 2005 AAO annual meeting, where the OCT was used as the logo of the meeting. As multiple companies entered the OCT market, a powerful factor in OCT adoption was the development of anti-VEGF therapy, as OCT became important for evaluating treatment response. The changing structure of reimbursement was critical to the establishment of OCT as a staple of ophthalmology clinics. 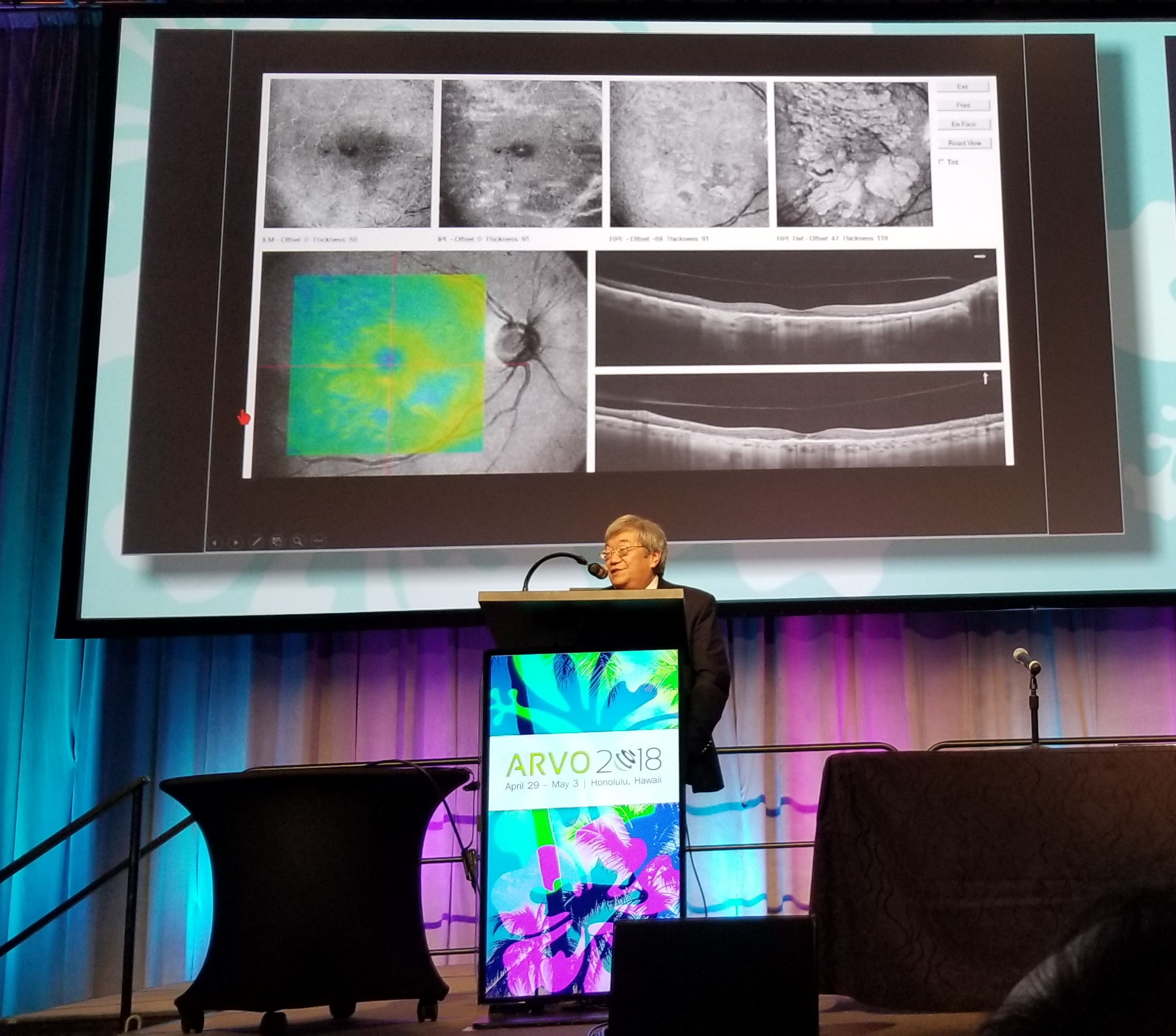 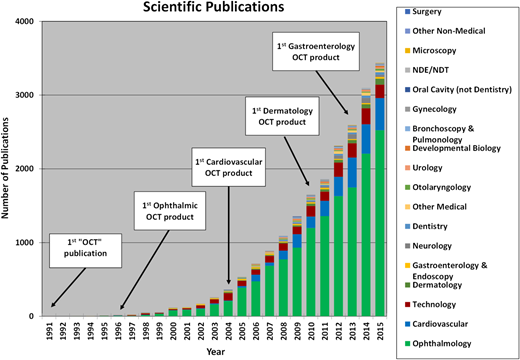 Growth of journal publications involving OCT. (From E. A. Swanson and J. G. Fujimoto, "The ecosystem that powered the translation of OCT from fundamental research to clinical and commercial impact [Invited]," Biomed. Opt. Express (2017)) Dr. Fujimoto related that OCT has led to estimated savings of $11 billion through its role in guiding personalized anti-VEGF, which amounts to a 21-fold return on government investment, as outlined in an important 2018 AJO paper by M. Windsour et al. However, he noted that the largest impact on patient care is much harder to quantify—the detection of early stage disease before irreversible loss of vision occurs. He stressed that the development of OCT would not have been possible without a complex ecosystem involving interaction among fundamental researchers, engineers, clinician scientists, government, and industry. “The cost to support research is high, therefore we all have a profound responsibility to make advances that are of value for society,” he stated. Throughout his lecture, Dr. Fujimoto returned time and again to the critical role played by trainees and early career professionals in propelling many of the critical advances in OCT technology. He had a clear and powerful message for the audience message: trainees and early career professionals can make major advances in science. Providing lessons from his own development as a researcher and innovator, he remarked, “There is a perception that innovation occurs with a single dramatic advance. Actually, a series of incremental advances can have a transformative effect, provided that they are chosen carefully and executed efficiently.” Looking to the future, the Beckman-Argyros award will enable Dr. Fujimoto and MIT to continue advancing OCT into new areas, including imaging retinal function. His research will use ultrahigh resolution OCT to measure submicron changes in photoreceptors and RPE from light stimulus and dark adaptation, which could serve as potential new markers for disease progression and treatment response. His future work will also further develop OCTA, to better quantify flow and flow impairment—an early marker for many ocular diseases. To help us keep up to date with developments in the field, Dr. Fujimoto pointed the audience to OCTNews.org, which tracks advances in scientific and clinical applications of OCT as well as providing updates on patents and venture capital activity. We congratulate Dr. Fujimoto on his award and look forward to hearing about advances in the field in the years to come. 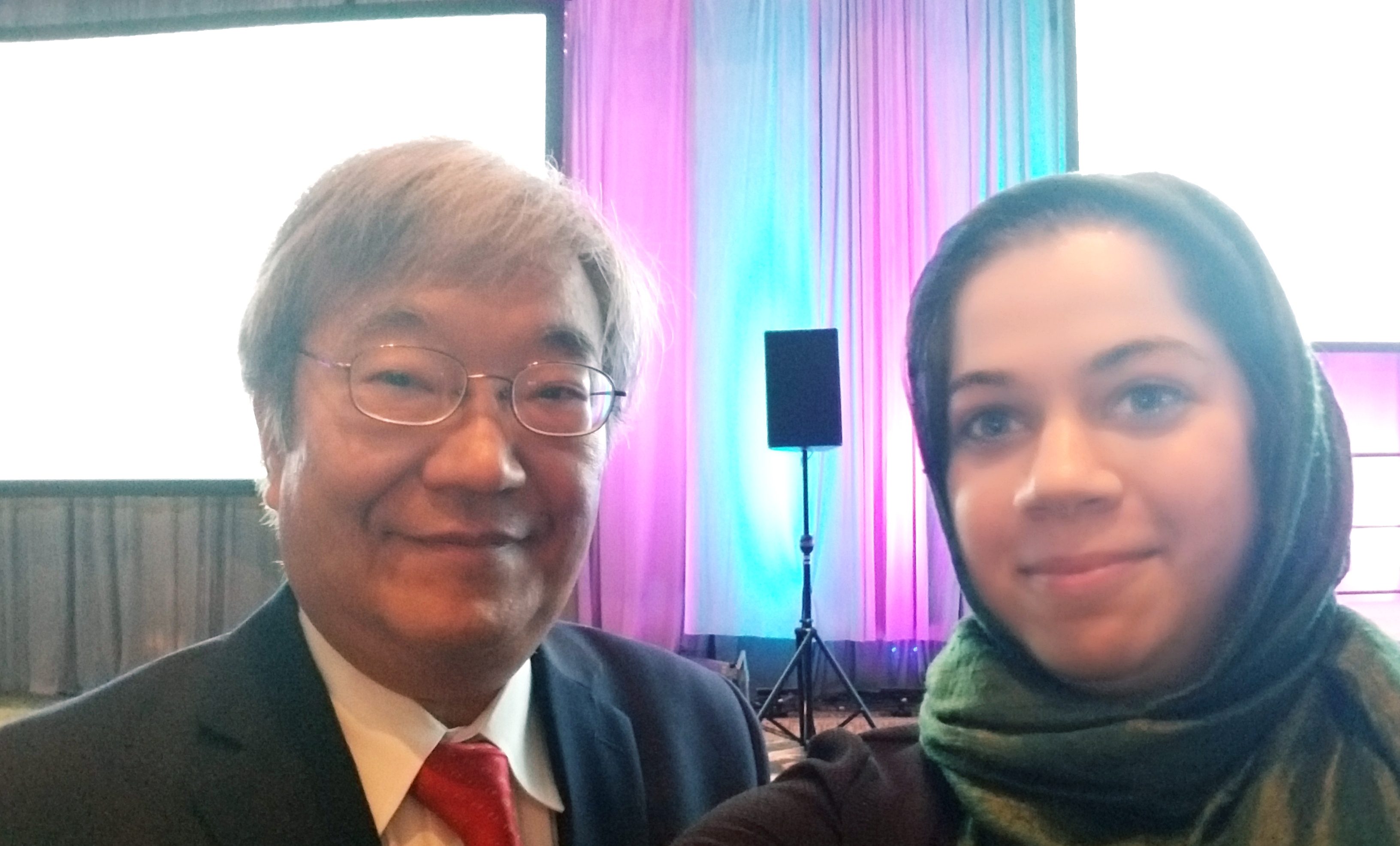