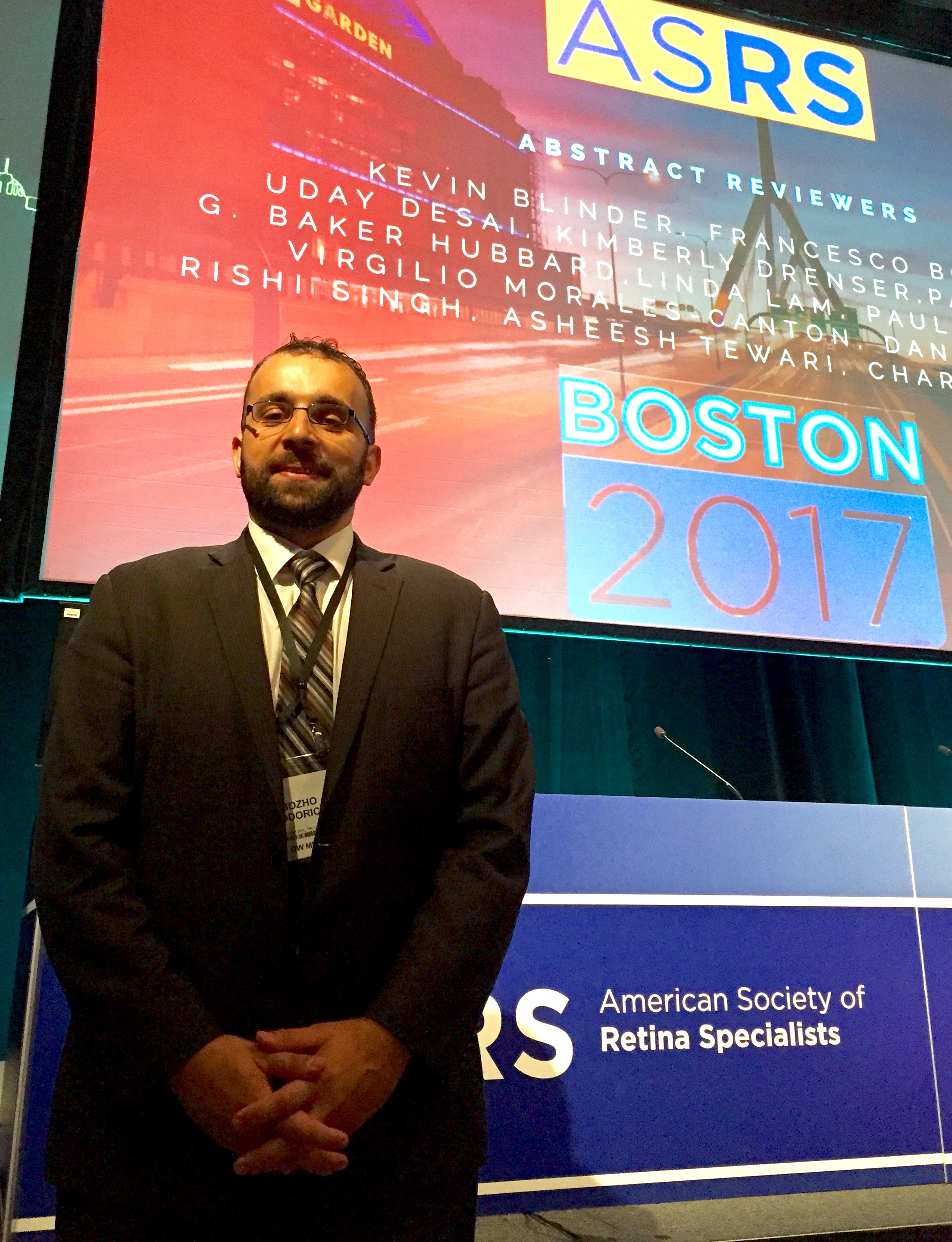 The final day of the ASRS annual meeting in Boston started off strong with hereditary retinal disease and genetic symposium. Next, Mark Humayan led an informative panel discussion reminding us of the dangers of unregulated stem cell therapies. We should all be aware that some rogue physicians have marketed these types of stem cell therapies as clinical trials to patients with absolutely no oversight from the FDA, NIH, or NEI. These dangerous practices can be confusing for desperate patients with limited treatment options who may think they are undergoing a safe therapy. The retina vascular symposium kicked off with Paul Hahn, who reviewed the results of the phase III RADIANCE trial demonstrating superiority of ranibizumab over PDT for myopic choroidal neovascularization. He noted that unlike some other forms of CNV, myopic CNV can be self-limited with approximately one half of patients requiring just 1-2 injections over the first year. Justis Ehlers then presented the 6 month interval results for the PERMEATE study evaluating peripheral and macular retinal vascular dynamics in DME and RVO after aflibercept therapy using novel quantitative analysis of wide field imaging for ischemia, leakage, and microaneurysms. Manish Nagpal reviewed the utility of perioperative anti-VEGF in reducing post-operative vitreous hemorrhage and macular edema in patients with retinovascular conditions undergoing vitrectomy for nonclearing vitreous hemorrhage. Using en face OCT and OCT-A, David Sarraf categorized the spectrum of perivenular ischemia and paracentral acute middle maculopathy (PAMM) in eyes with CRVO.  In a retrospective multicenter study of 136 patients, Ori Segal found that there is a correlation between the extent of OCT disorganization of retinal inner layers (DRIL) and visual acuity in eyes with RVO and macular edema. Colin Tan reviewed the interim results for the EVEREST II study comparing ranibizumab with or without PDT for polypoidal choroidal vasculopathy. At 12 months, visual acuity in the combination therapy improved by 8.3 letters compared with 5.1 letters in the ranibizumab group, and the comibination group required fewer injections (7 vs 3). 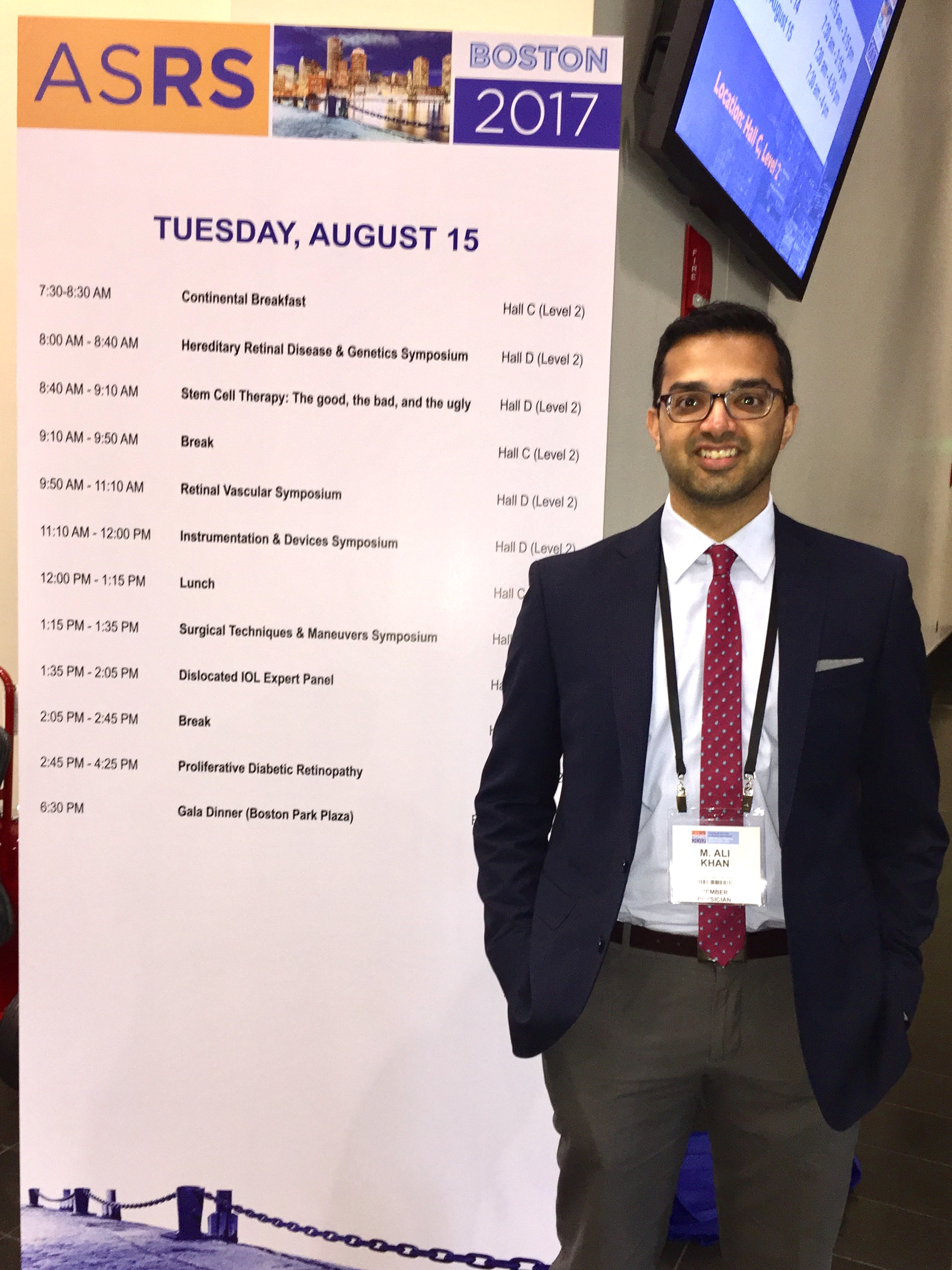 Alex Yuan reviewed the safety and improved visual function outcomes of the Argus II retinal prosthesis system after 1 year. Congratulations to Bozho Todorich, winner of the Fellows Forum Research Award, who reviewed his technique for sutureless intrascleral fixation of a secondary 3-piece IOL. Edmund Wong also presented his technique of intrascleral fixation, which he believes gives a more reliable refractive outcome compared with scleral sutured techniques. Mark Walsh outlined his intrascleral fixation technique which involves a transconjunctival approach and melting of the distal haptic to reduce the risk of subluxation. A four-point fixated secondary scleral sutured AO60 IOL technique presented by Ali Khan found reduced corneal edema compared with ACIOL in a year-long follow up study. Dimosthenis Mantopoulos also reviewed his Gore Tex suture technique using a cow hitch knot with the CZ70BD lens. Highlights of the proliferative diabetic retinopathy section included an interesting discussion regarding PDR treatments. According to a study by Carl Baker evaluating Protocol S style treatments, rates of PDR worsening were 30% higher in patients treated with PRP compared to ranibizumab. Other predictive factors for worsening were use of pattern laser (2.04 hazard ratio) and, not surprisingly, the presence of high risk PDR at baseline (3.97 hazard ratio). While these data appear to support the use of anti-VEGF medications for PDR, Neil Bressler’s data on the cost effectiveness of ranibizumab vs PRP for the treatment of PDR gives us some perspective that will certainly attract the attention of payers and policy makers. Results for the use of ranibizumab for PDR were favorable for treatment of patients with concurrent DME at approximately $55,000 per QALY, but not for treatment of patients without concurrent DME which results in a cost of over $521,000 per QALY. Christopher Aderman, M.D. Vitreoretinal Surgery Fellow Will Eye Hospital, Thomas Jefferson Univsersity