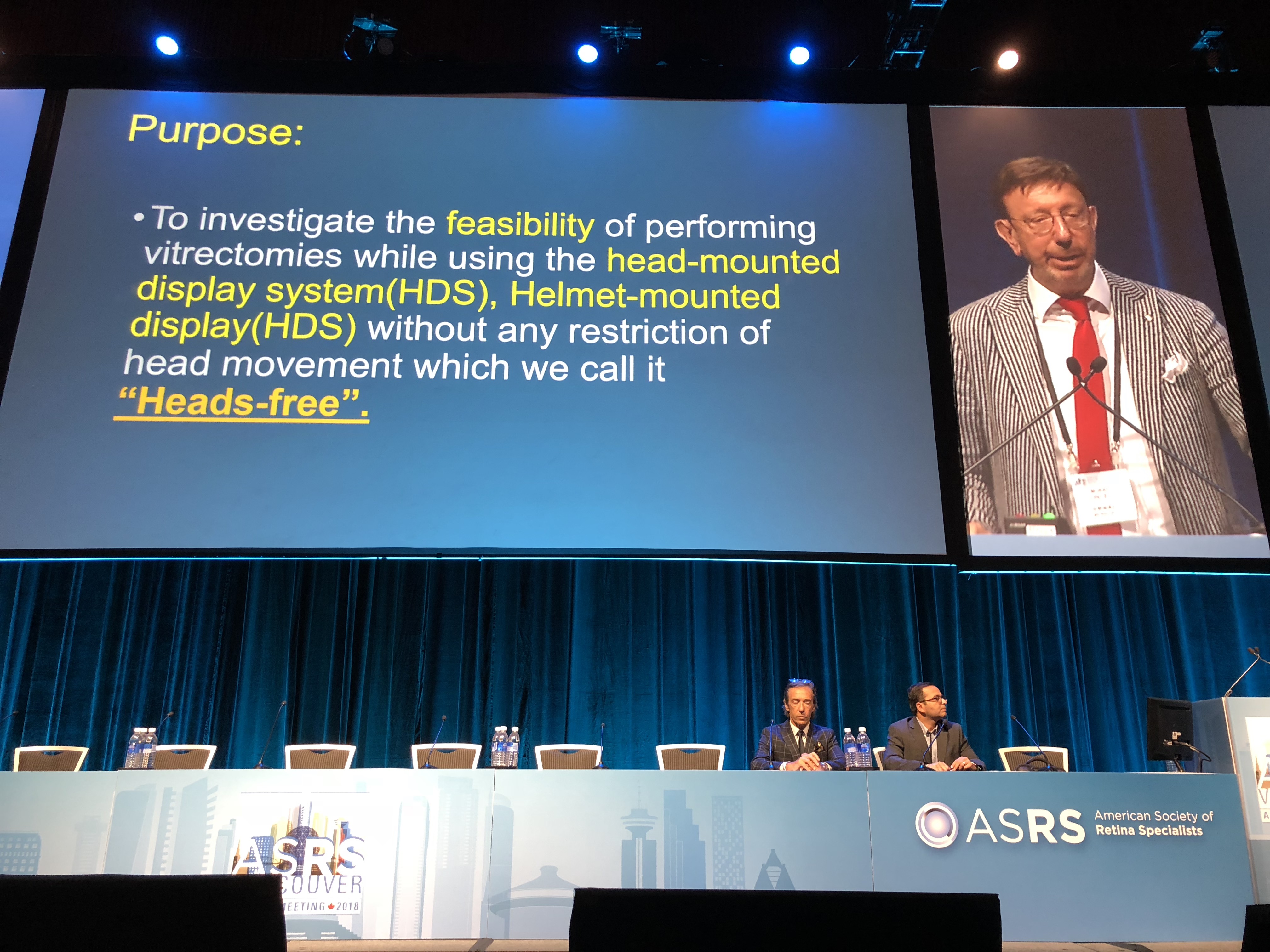 
The surgical symposium wrapped up Sunday’s morning session. The symposium started with Murat Oncel, MD discussing the benefits of a heads-free 3D head-mounted display system in vitreoretinal surgery. The main advantages of this system is better ergonomics compared to monitor-based 3D systems. The device is light and comfortable with a short and easy learning curve. 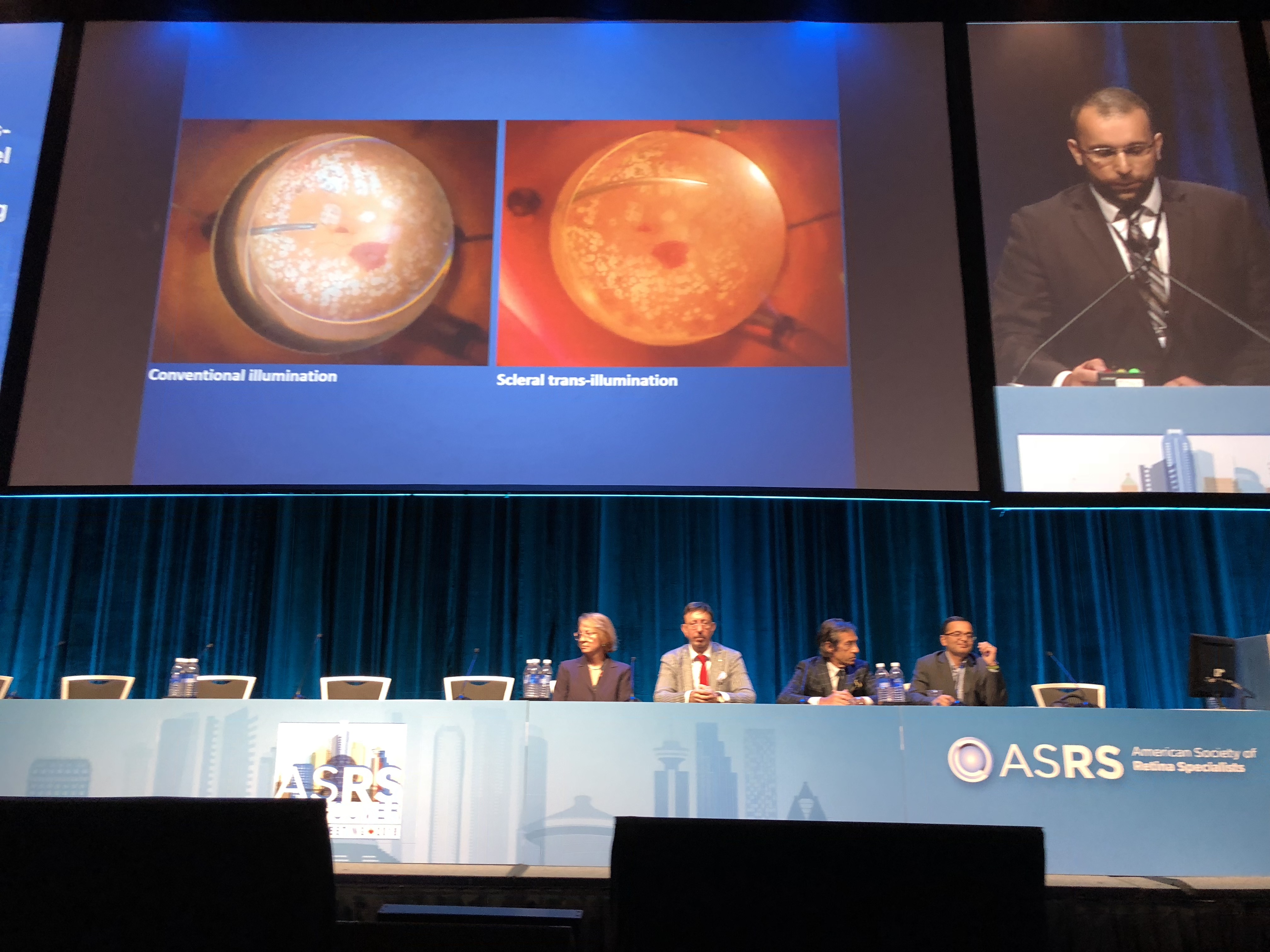 Cynthia Toth, MD  spoke about the benefits of 3D visualization with Optical Coherence Tomography (OCT)in anterior and posterior segment surgery. Specifically, she described improved corneal cuture placement with this system as well as improved surgical tool positioning over the retina, which is greatly enhanced with depth-based colorization. This has great implications for delivery of subretinal therapy, as volume is directly and accurately measured. We look forward to the advancement of this technology in the future. 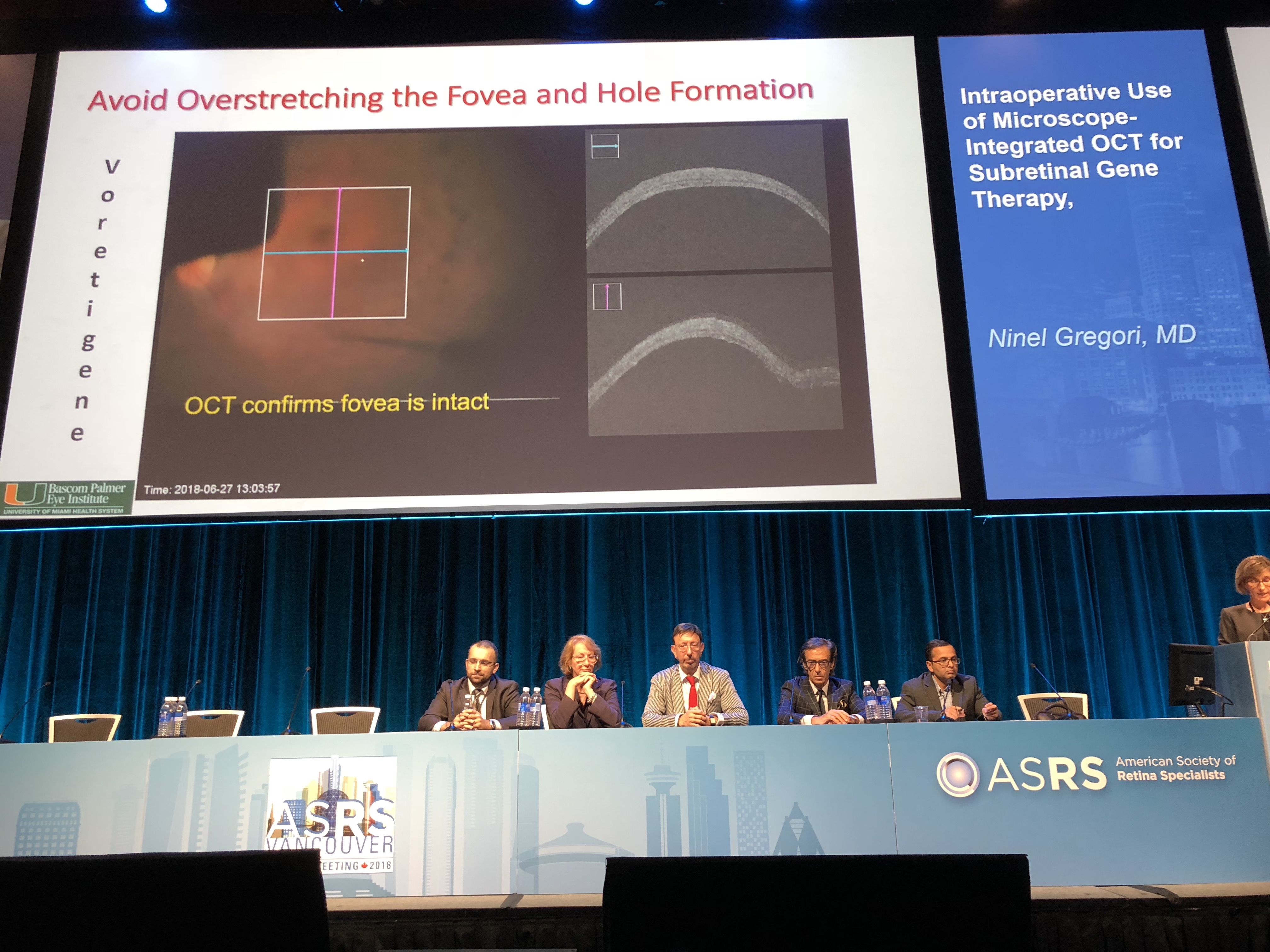 Bozho Todorich, MD, PhD presented a novel method of simultaneous illumination and scleral depression using a scleral depressor trans-illuminator. He postulated this instrument would be particularly useful in settings where independent surgeons do not have an assistant in the operating room to assist with scleral depression. He explained this method is adaptable across multiple platforms, but is particularly attractive for use with the Ngenuity 3D visualization system as the luminance of the light pipe can be digitally amplified. He expects this instrument to be commercially available in the coming months.

Ninel Gregori, MD presented her experience with the use of microscope-integrated OCT for subretinal gene therapy. The main advantages of this system are confirmation of the correct tissue plane, ability to determine the area and dimensions of the subretinal bleb to ensure coverage of the therapeutic target zone, and improved safety by preventing overstretching of the fovea and inadvertent macular hole formation. 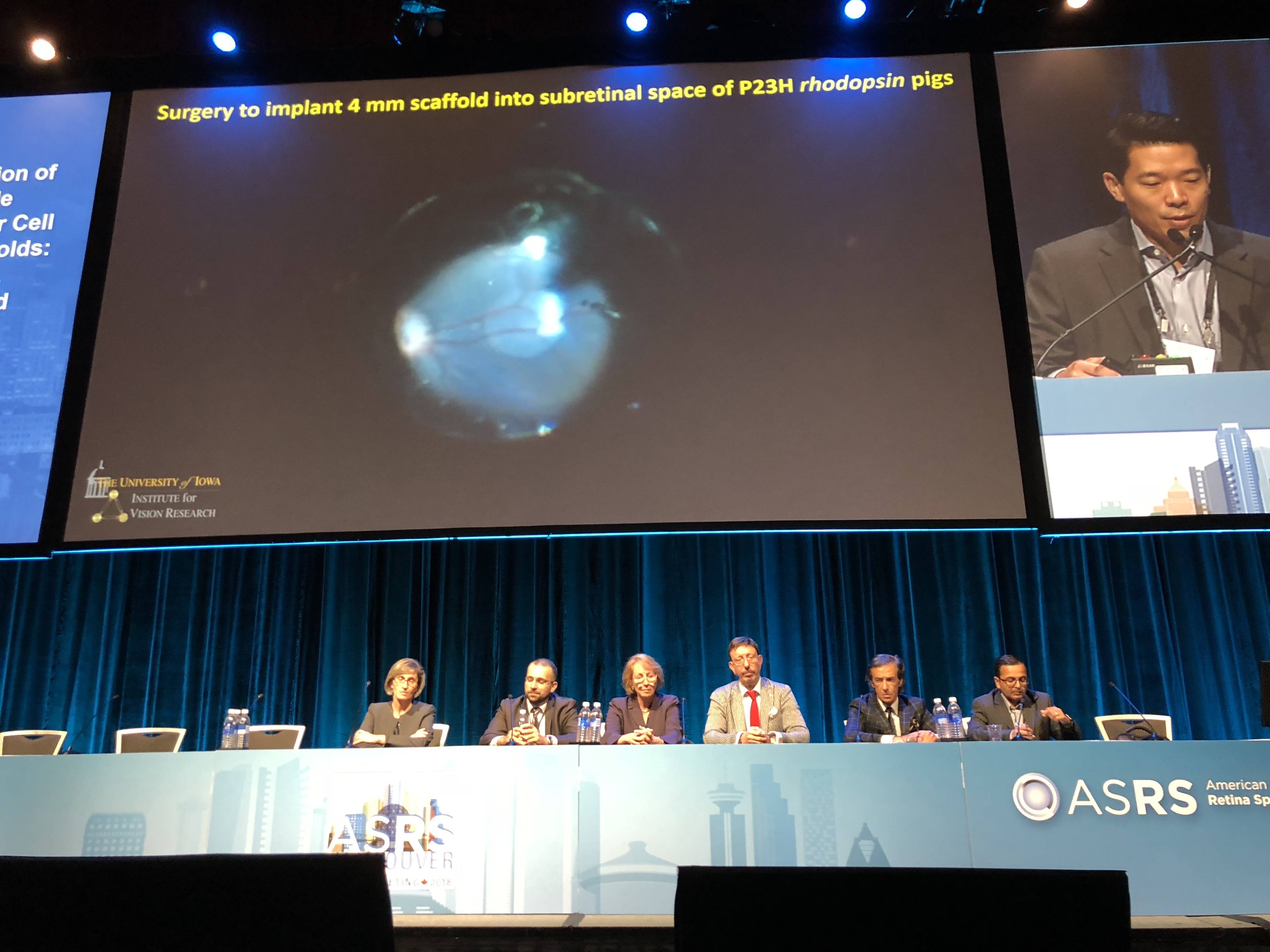 Elliott Sohn, MD  treated the audience to an enthralling soundtrack of his personal racecar ventures while demonstrating the viability and effectiveness of subretinal implantation of a polymer scaffold to support survival of photoreceptor precursor cells. He concluded that polymers that support patient-derived photoreceptor sheets can be successfully inserted into large animals and may prove to be beneficial in humans. 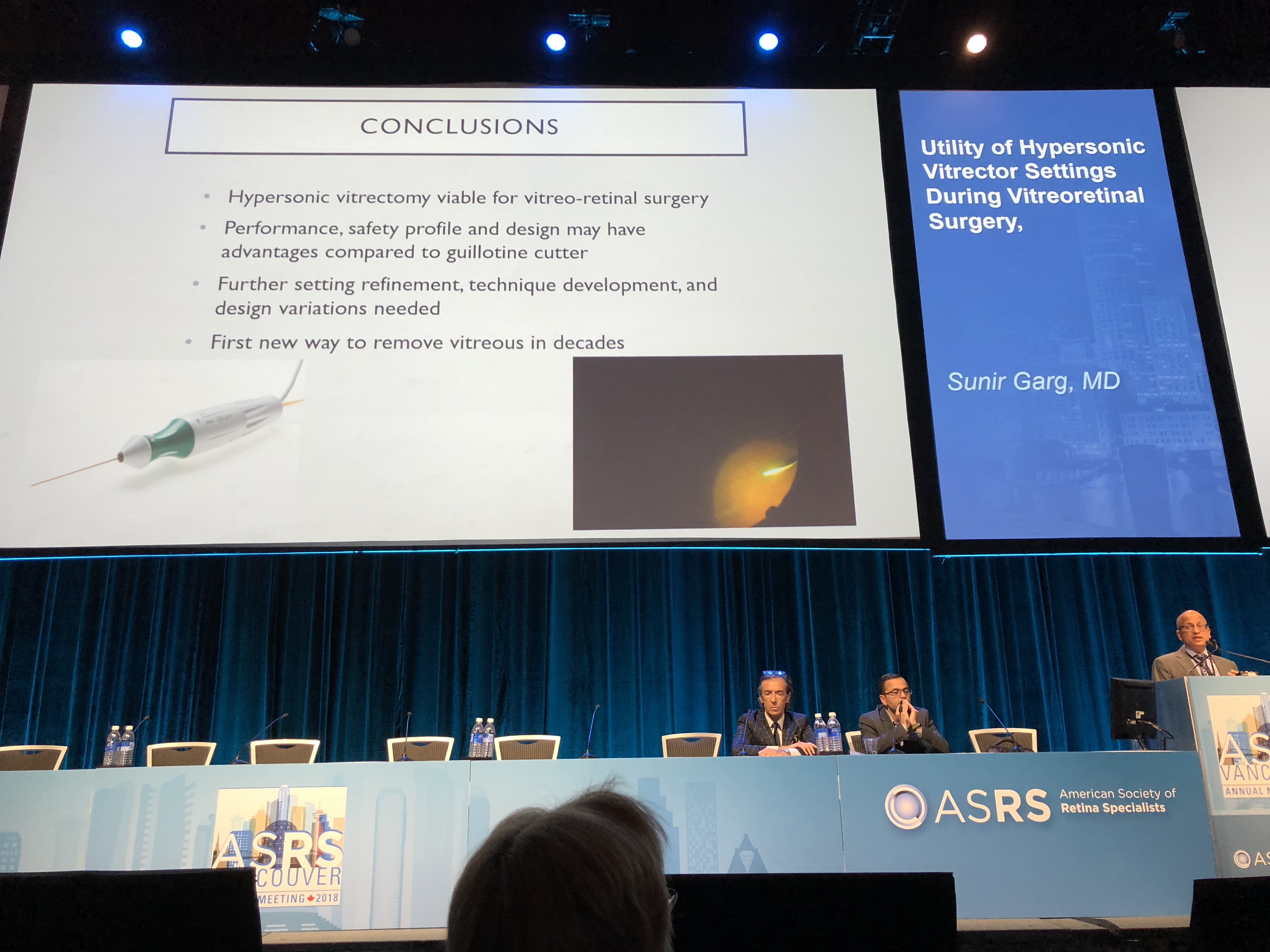 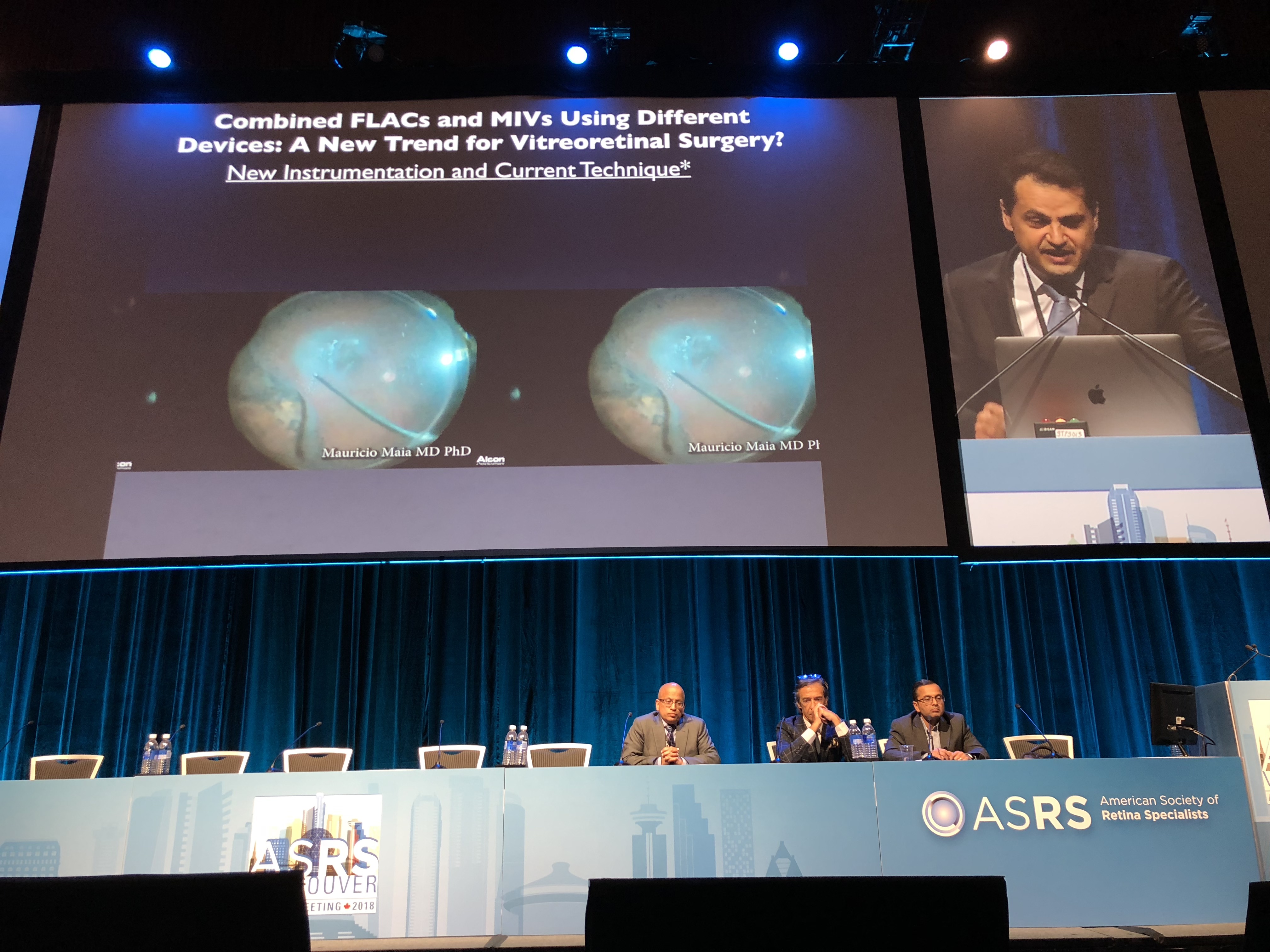 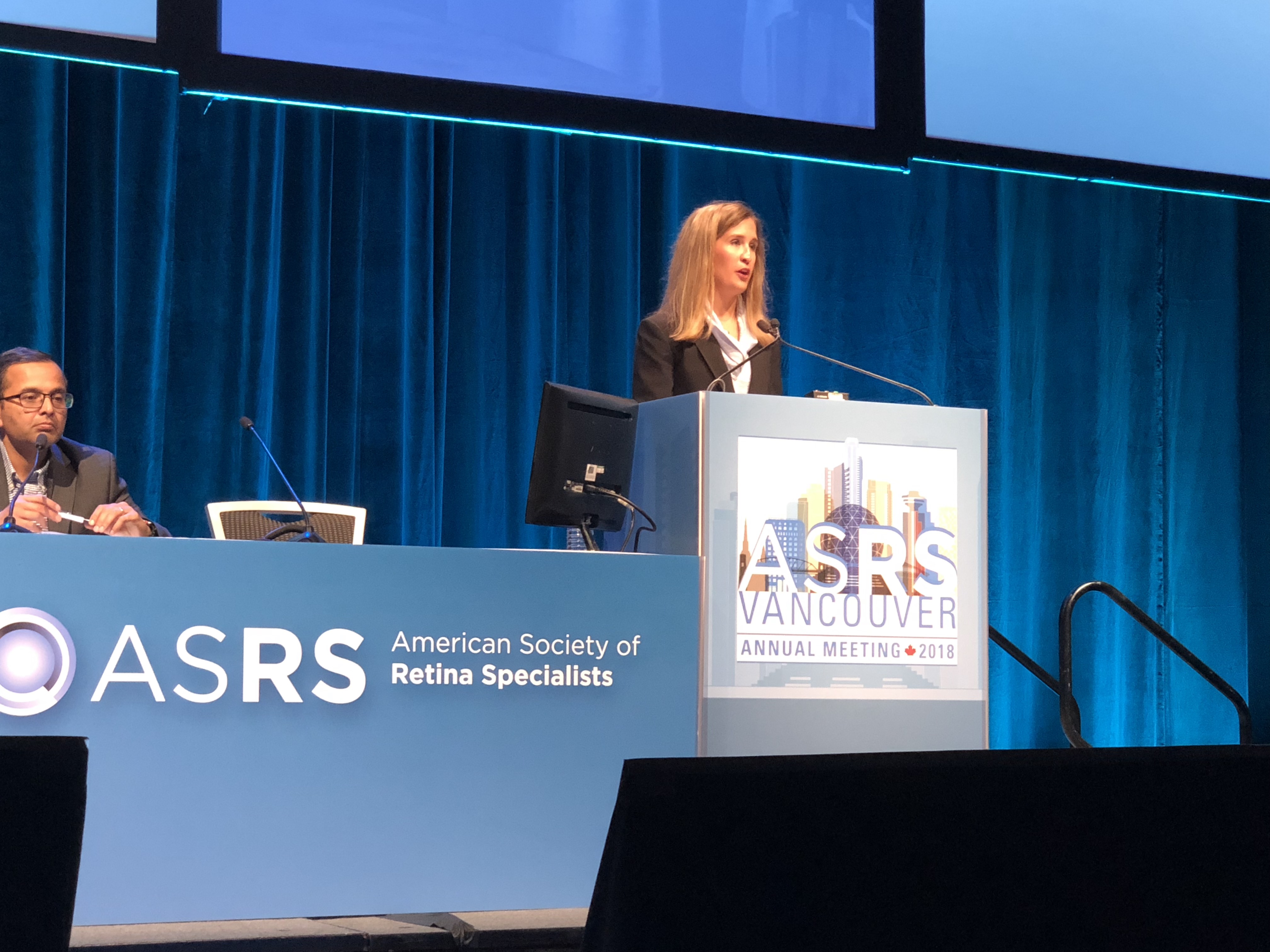 Elizabeth Atchison, MD compared single intraoperative subconjunctival triamcinolone acetonide (4mg) injection versus 4-6 weeks of topical steroid taper following vitreoretinal surgery and found the results to be quite similar. There were no significant differences in rates of complications, including differences in intraocular pressure. 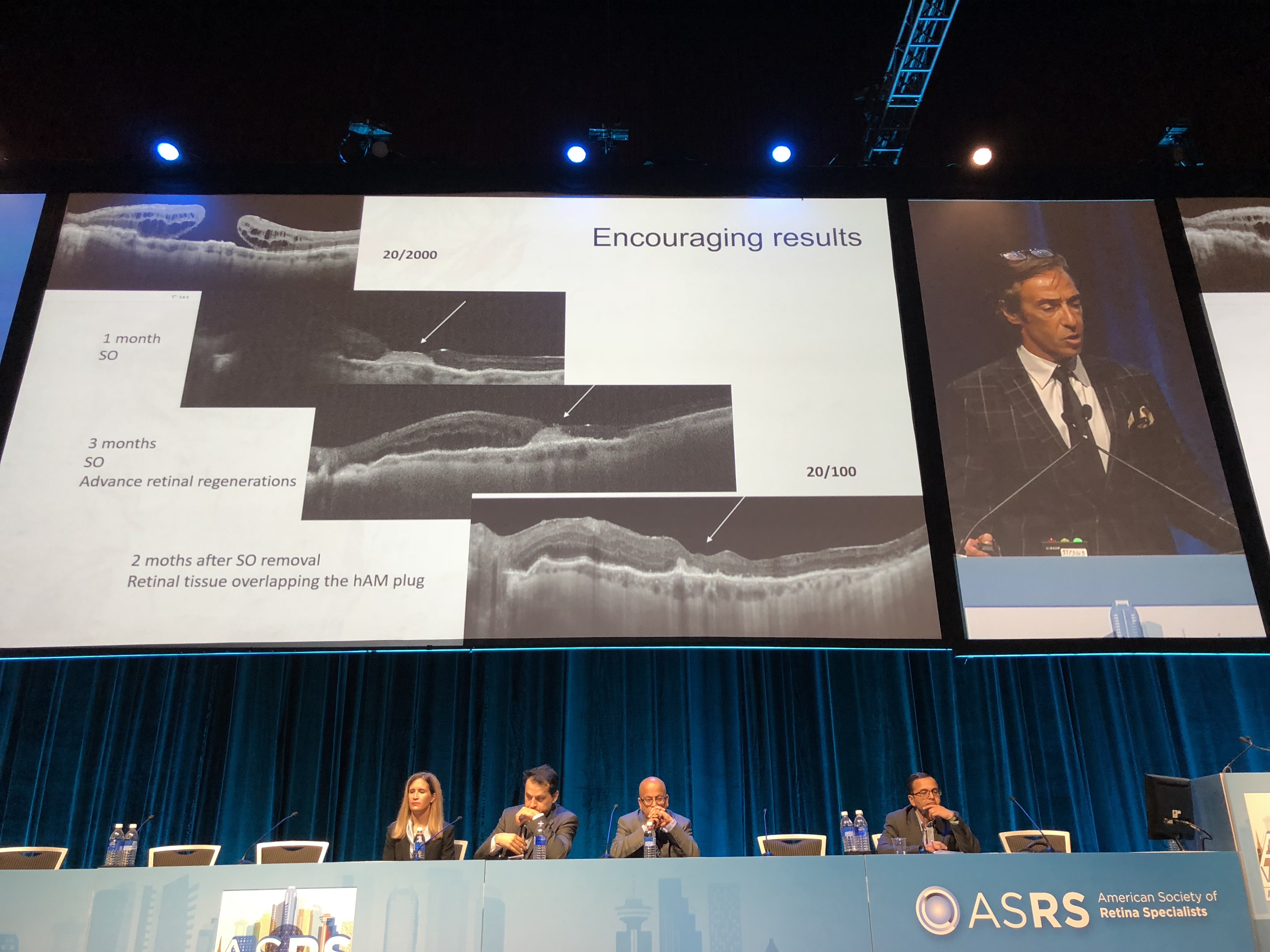 Stanislao Rizzo, MD presented an intriguing novel method to close macular holes and peripheral retinal breaks using amniotic membrane grafts. In his initial experience with the technique, he placed silicone oil and later modified the technique to using gas and eventually just air, with a short amount of prone positioning. He reported impressive anatomical and functional results. Despite the presence of epithelium in the amniotic membrane grafts, no epiretinal membranes or recurrence was noted at 12 months. 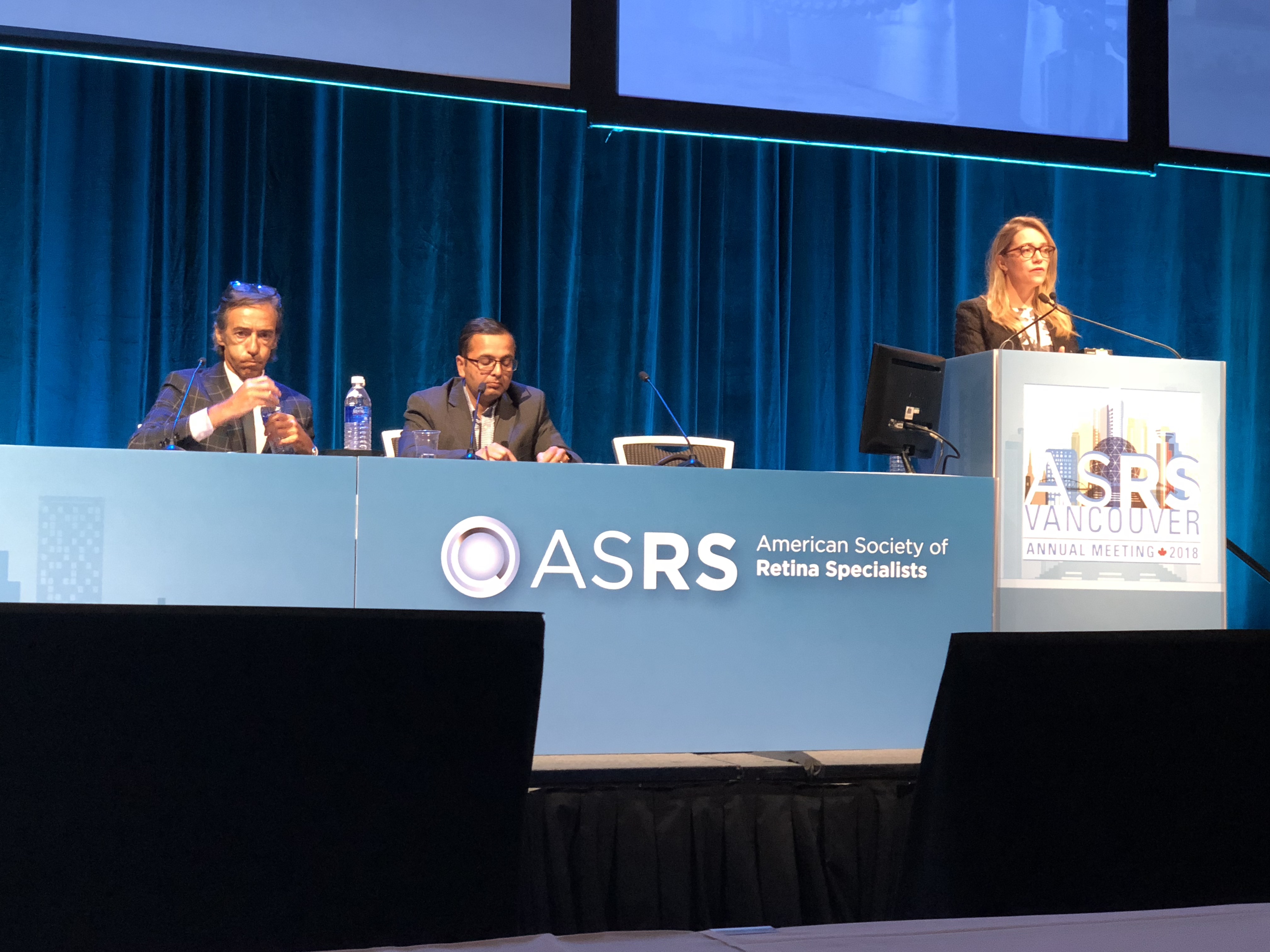 Aleksandra Rachitskaya, MD reported the results of the Argus II post-approval study and compared these results with the feasibility clinical trial. The results were favorable and the complication profile was found to be acceptable up to 2 years post-operatively. 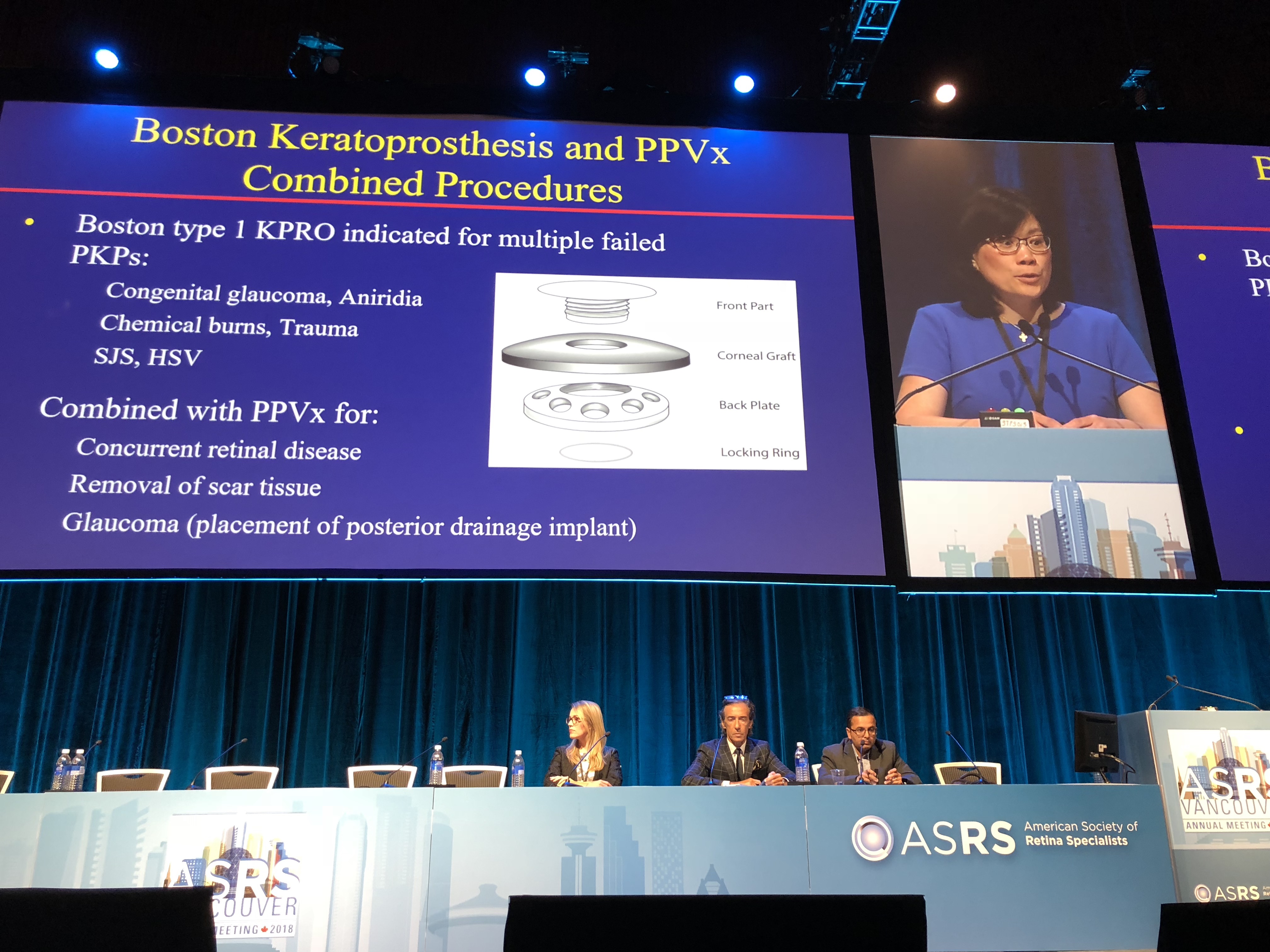 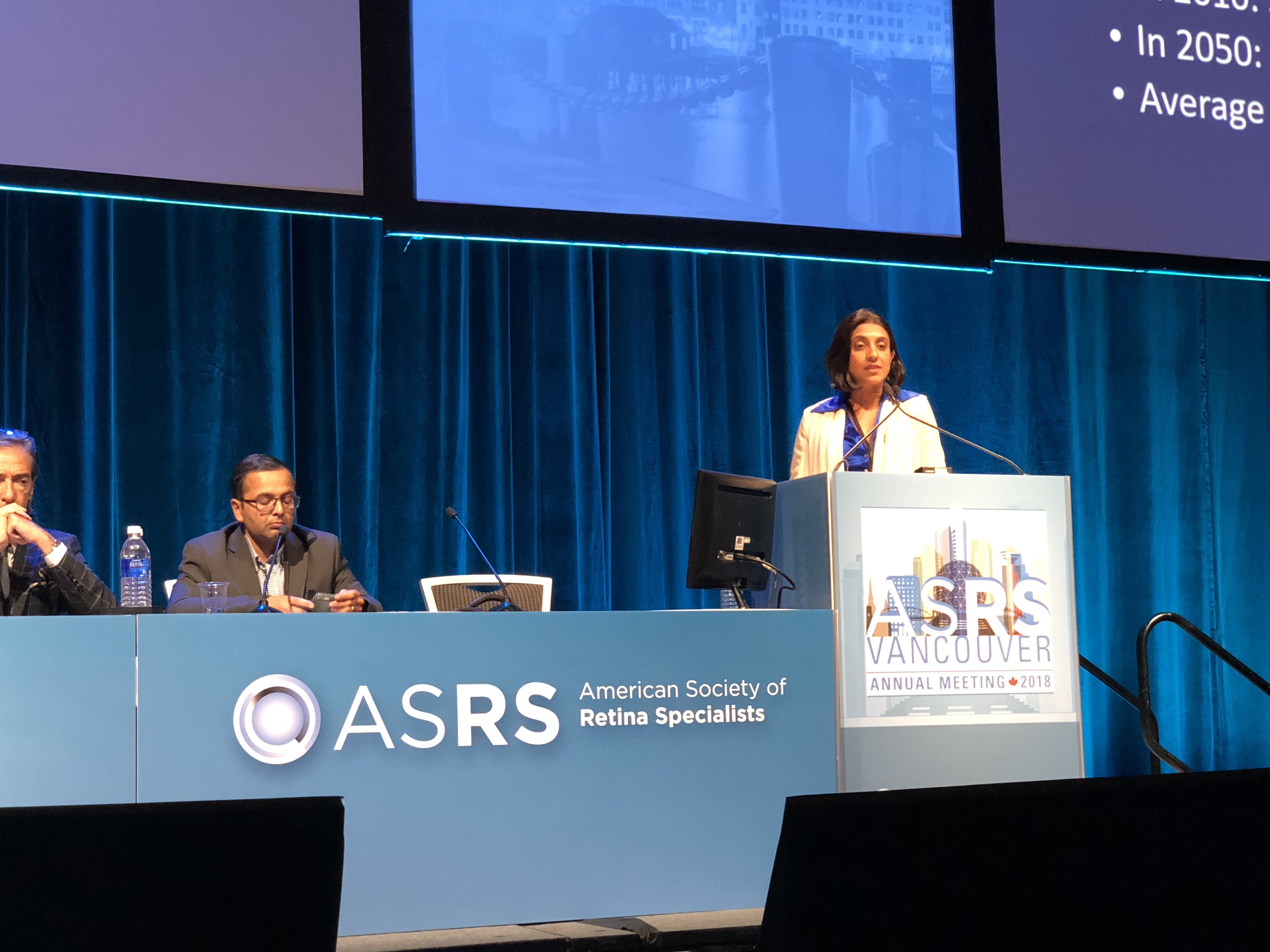 Manju Subramanian, MD presented an interesting study on the presence of biomarkers for Alzheimer’s disease in vitreous samples in patients undergoing vitrectomy for a variety of eye conditions. She found the presence of AB40 and AB42 to be lower in vitreous samples of patients with lower scores on mini-mental status exams, which mirrors that which is seen in the cerebral spinal fluid. Interestingly, total levels of Tau protein were found to be increased in vitreous samples of patients with higher scores on mini-mental status exams, which is the opposite of what is seen in the cerebral spinal fluid. Dr. Subramanian postulated the presence of diabetic retinopathy may alter the amount of Tau protein detected in the vitreous. She concluded that Alzheimer’s disease biomarkers exist in the vitreous and there is a relationship between the level of these biomarkers in the vitreous and mini-mental status exam scores and cognitive function, suggesting these biomarkers may play a role as an early diagnostic tool. 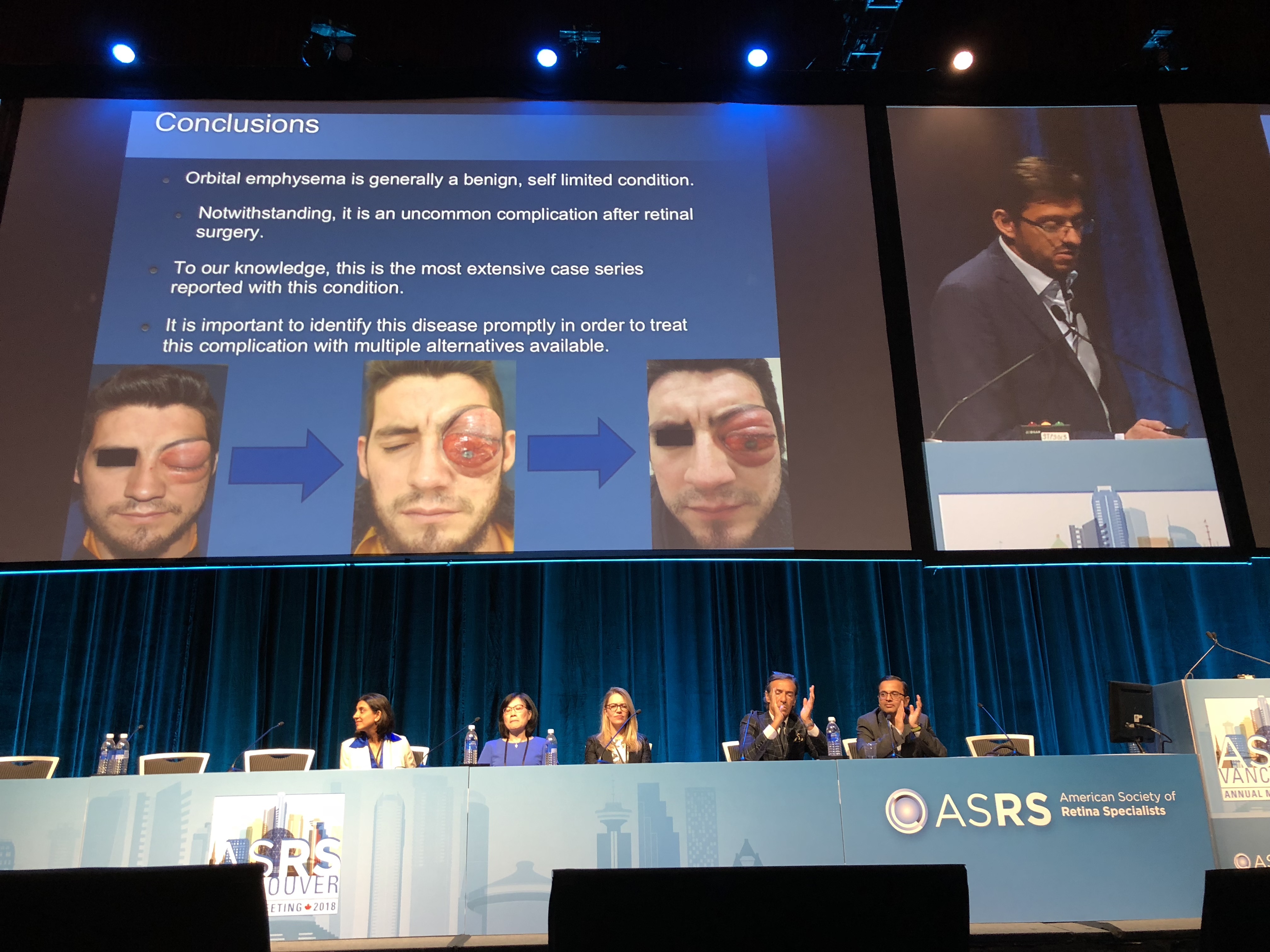 Virgillo Morales-Canton, MD presented the last talk in the symposium, reporting 12 cases of orbital emphysema after vitrectomy. While usually benign and self-limited, he emphasized the importance of identifying this complication promptly to provide proper treatment when needed.