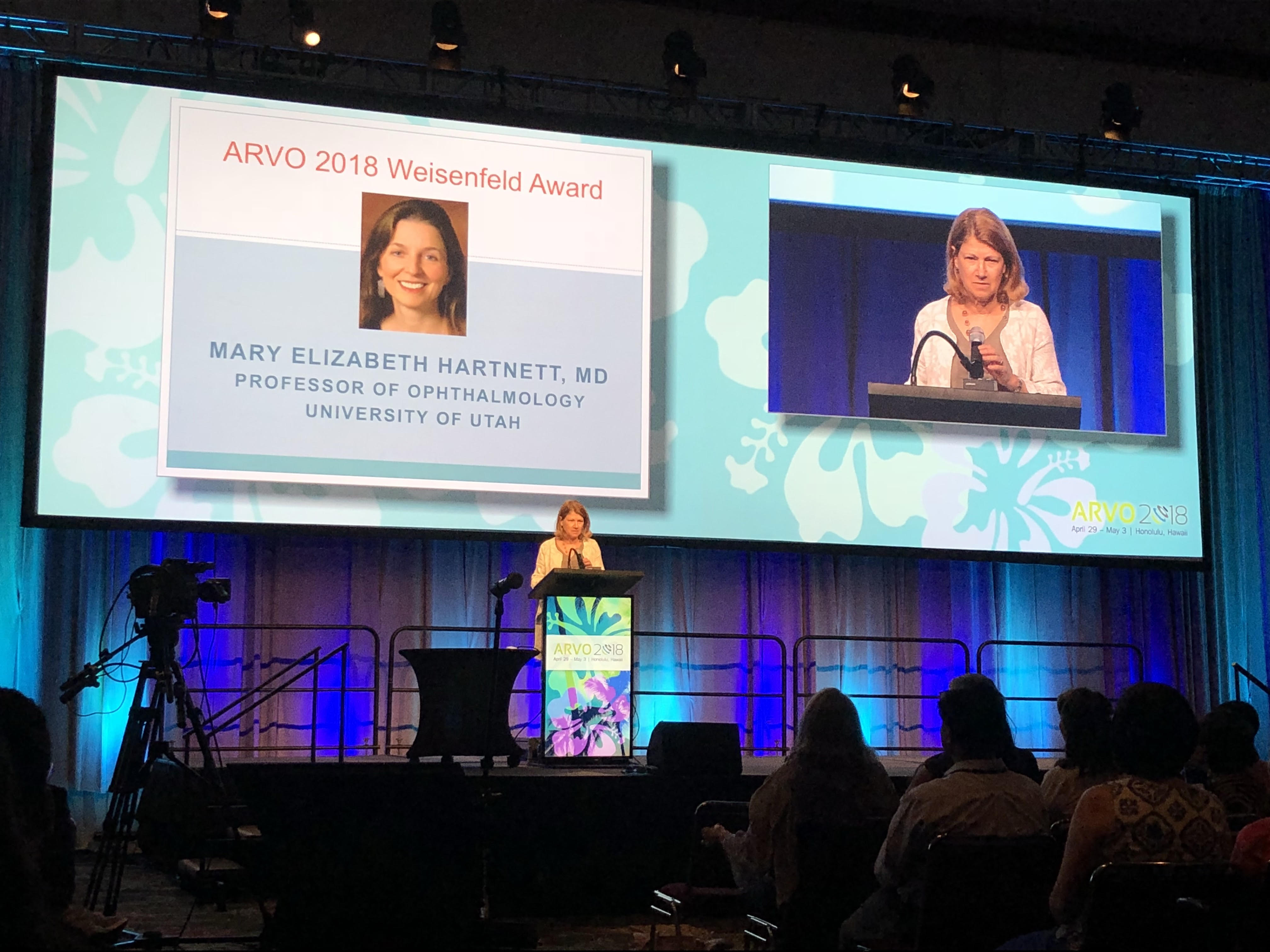 Welcome to the RETINA Roundup coverage of ARVO 2018 in Honolulu, Hawaii. During this conference, we will feature award lectures by giants in the field who have revolutionized how we diagnose, manage, and understand, the retina. Marianeli Rodriguez, MD, PhD Vitreoretinal Surgery Fellow Mass Eye and Ear Dr. Mary Elizabeth Hartnett was awarded the 2018 ARVO Weisenfeld Award, attributed to an individual for their special contributions to visual sciences. Dr. Patricia D’Amore introduced Dr. Hartnett during the first award lecture at this year's ARVO meeting. 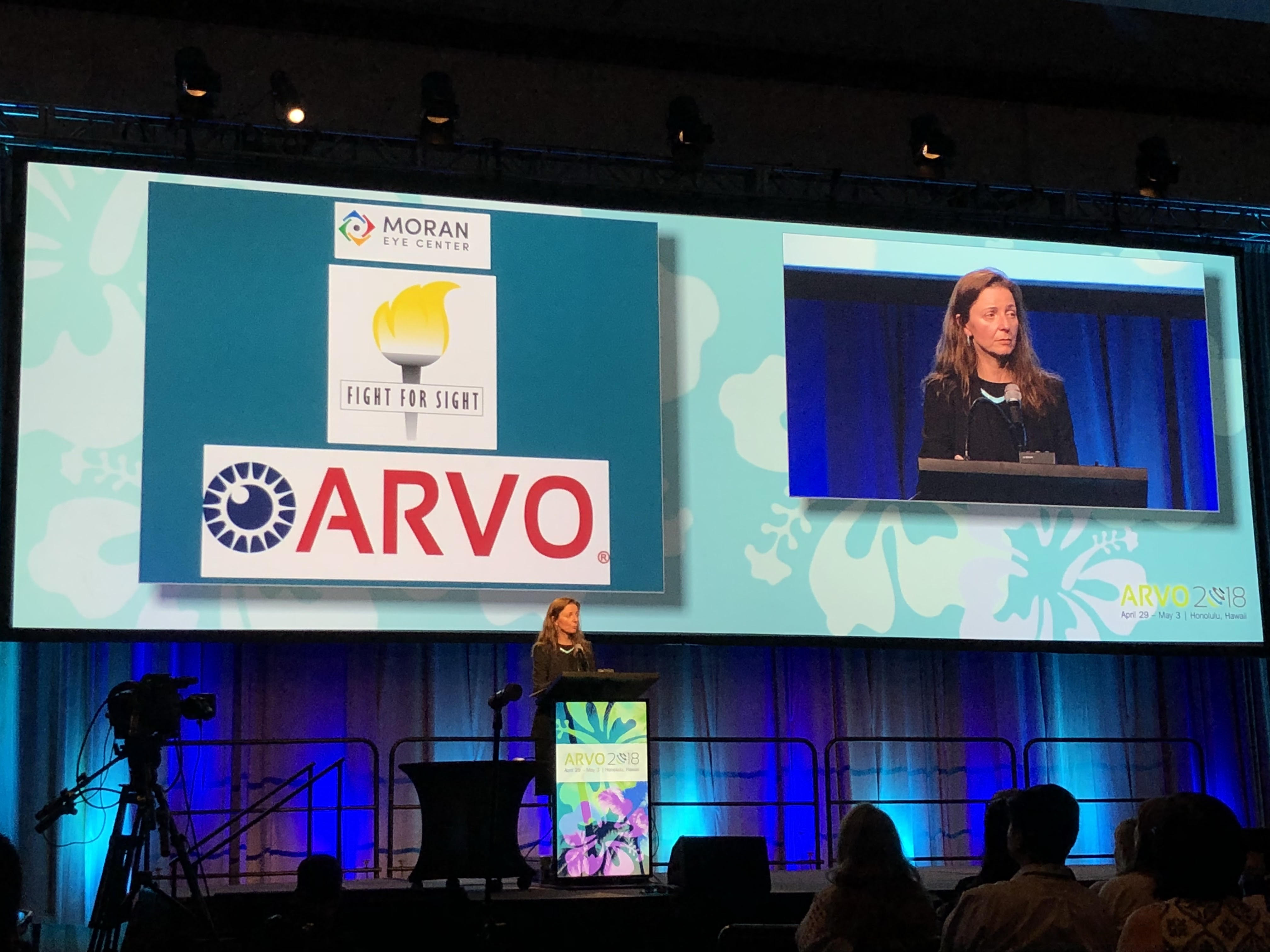 Dr. Hartnett grew up in Lackawanna, NY. She received her medical doctorate from Albany Medical College in the combined BS/MD program. She then underwent post graduate training at Boston Children's Hospital and Schepens Eye Research Institute. She then completed her residency at University Hospitals of Cleveland, followed by adult and pediatric vitreoretinal surgery fellowship training at Schepens Retina Associates. Currently, Dr. Hartnett is a Professor of Ophthalmology, Director of the Pediatric Retina Service and Co-Director of the MD/PhD program at the Moran Eye Center of the University of Utah. She has authored more than 225 articles, reviews and chapters and she is editor of the book Pediatric Retina. After the introduction, Dr. Hartnett went on to deliver her award lecture. She has been instrumental in elucidating the basic mechanism of VEGF signaling. She has focused her career on studying the role of this factor during normal and aberrant angiogenesis in retinopathy of prematurity (ROP). She uses a rat model of oxygen induced retinopathy (OIR) to better understand the pathogenesis of this disease which is increasing in prevalence. 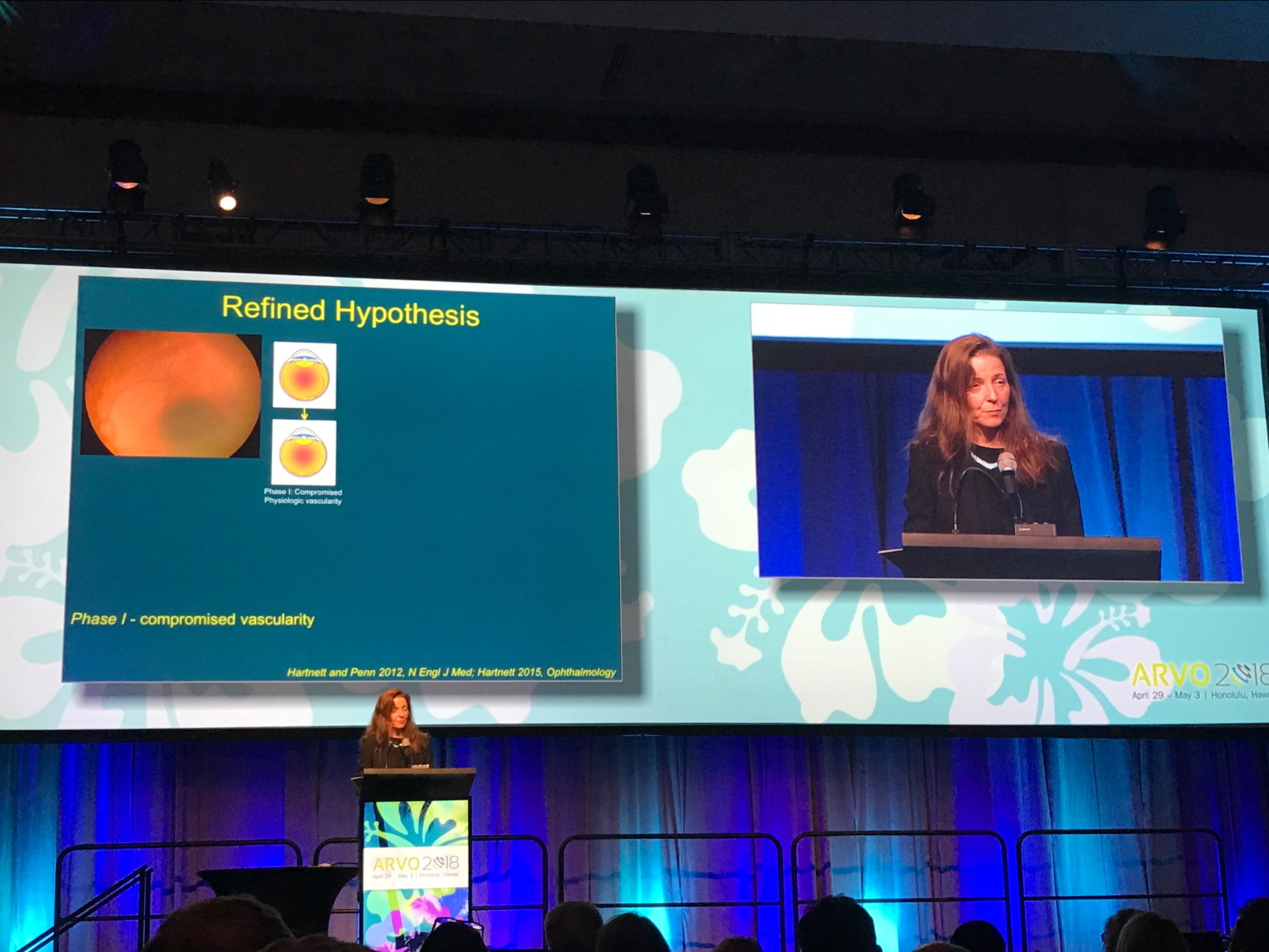 At the time when anti-VEGF was being experimented for the treatment of premature infants with severe ROP, Dr. Hartnett was also showing in the laboratory that inhibition of VEGF either with an anti-VEGF antibody or through inhibition of the VEGFR2 receptor reduced intravitreal neovascularization (IVNV). However, the question of recurrence of disease, the optimal dosing, as well as unwanted systemic side effects remained in her mind. VEGF signaling is indeed complex and knockout of VEGF or VEGFR is lethal. By targeted knockdown of VEGF-A in Muller cells her group has seen a reduction in IVNV while preserving normal physiologic retinal development (PRVD). She also described how increased signaling through the VEGFR2 receptor leads to disordered mitosis, leading endothelial cells to grow on top of each other which may explain why IVNV occurs. Additionally, she has shown that VEGF is neuroprotective in oxygen stresses. In mild ROP, anti-VEGF may harm capillaries and the neural retina. In the future, Dr. Hartnett would like to continue studying the physiologic retinal vascular development in order to protect the physiologic vascularity and the neural retina. Congratulations Dr. Hartnett, and thank you for the inspirational work that you and your colleagues have accomplished!