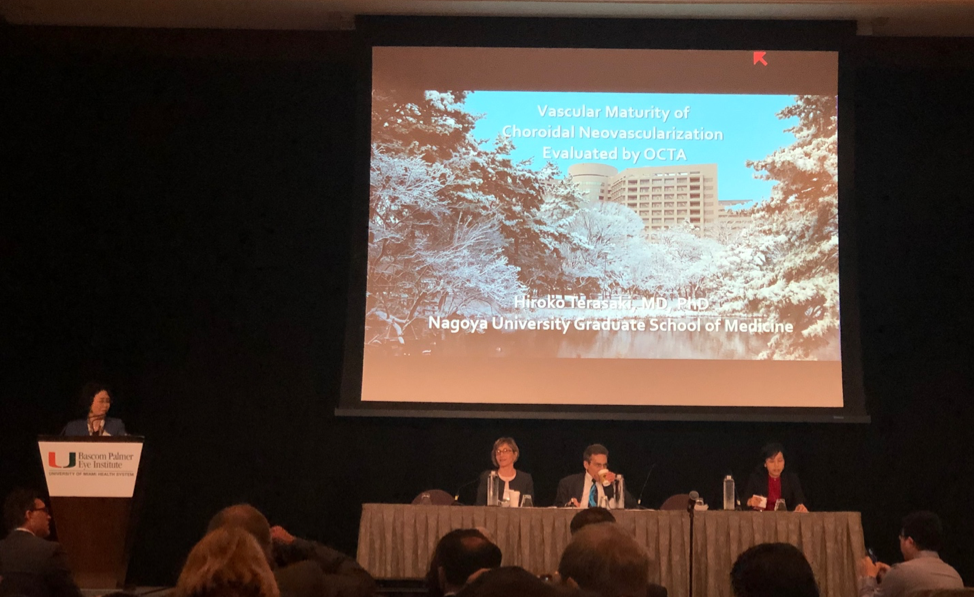 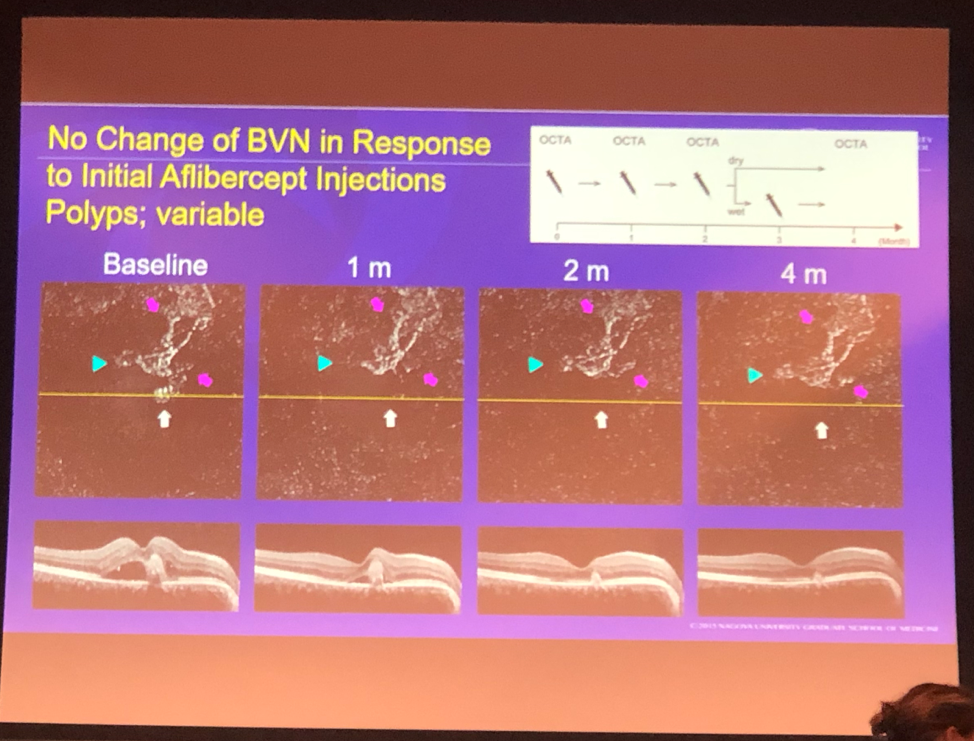 Dr. Terasaki discussed how neovascular networks mature in the setting of low oxygen, high VEGF environments. She highlighted how proliferation and remodeling take place within the networks to become mature, larger diameter vessels, with branch points. She used OCTA to both quantitatively and qualitatively analyze neovascular networks using AngioTool. She looked at subjects with AMD who were treated with aflibercept using a treat-and-extend approach and characterized total vessel area and junction density. She proposed that while the networks seemed to respond to initial treatment, they often rebounded over time. She related this to PCV lesions that she followed similarly. PCV branch vascular networks in some patients had no notable changes with treatment, while others had complete resolution. This was an excellent introduction to Fenghua Wang, PhD, who discussed how OCTA may change the way we think about and characterize the vasculature in polypoidal choroidal vasculopathy lesions. 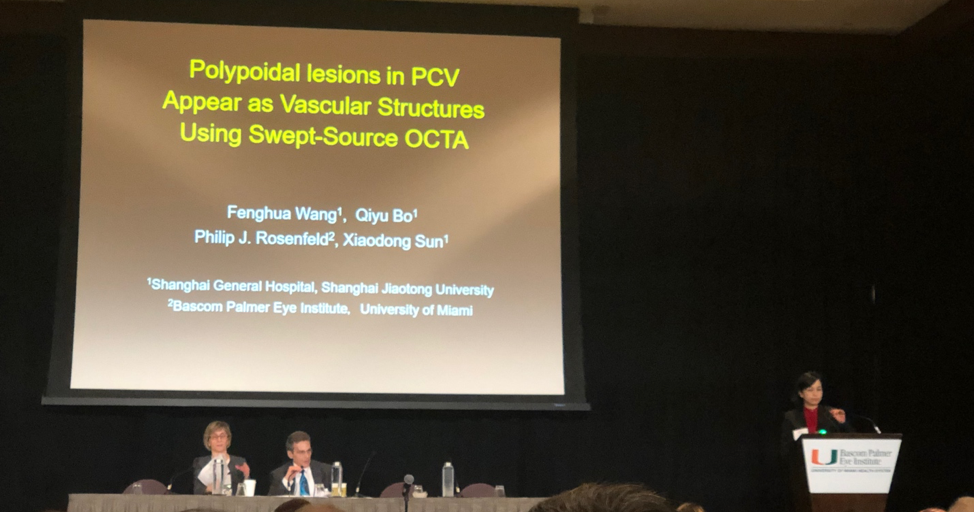 Dr. Wang discussed her study that sought to report the characteristics of polypoidal lesions and their relationship to branching vascular networks (BVNs) in eyes with PCV using swept source OCT angiography. She highlighted that CNVs were typically type I (but could also be type II) and that the diagnosis is typically made with ICGA. Importantly, she showed that these polyps could be identified using SS-OCTA. And she highlighted that these lesions actually did not appear aneurysmal, but instead were sights of new vascular development – mimicking glomerulus-like networks. She proposed keeping the nomenclature of PCV, rather than aneurysmal type I neovascularization. This provoked an entertaining discussion of the historical underpinnings of how the name “polyp” developed from Dr. Lawrence Yannuzzi and others. 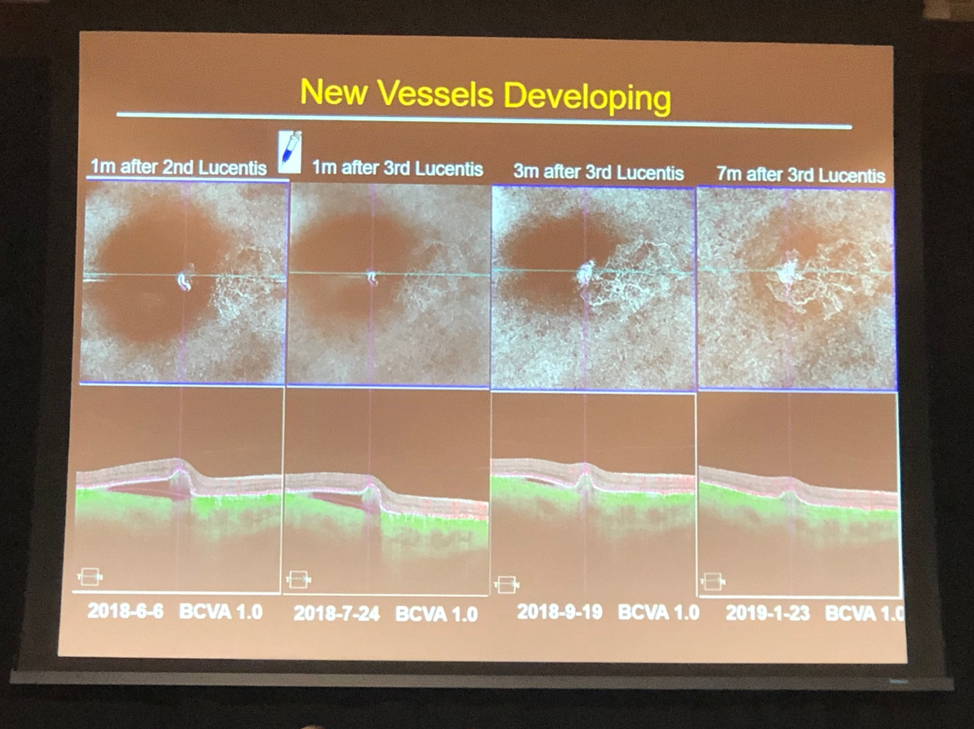 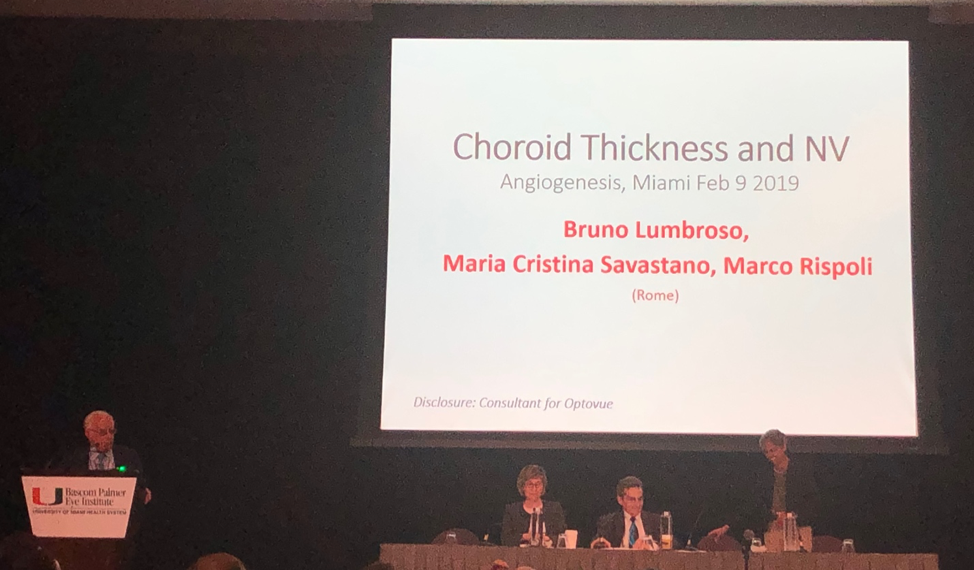 Dr. Usha Chakravarthy MD followed this up with a thought-provoking discussion of macular atrophy in the 5-year follow up study of the IVAN trial. She highlighted that CNV lesions managed with anti-VEGF therapy exhibited extensive atrophic changes over time at high frequency. She reported that eyes with intra-lesional macular atrophy had worse function compared to eyes without that feature (BCVA was on average worse by one line if ILMA was present, and LLA is on average worse by 12-13 letters in eyes with ILMA compared to those without ILMA). 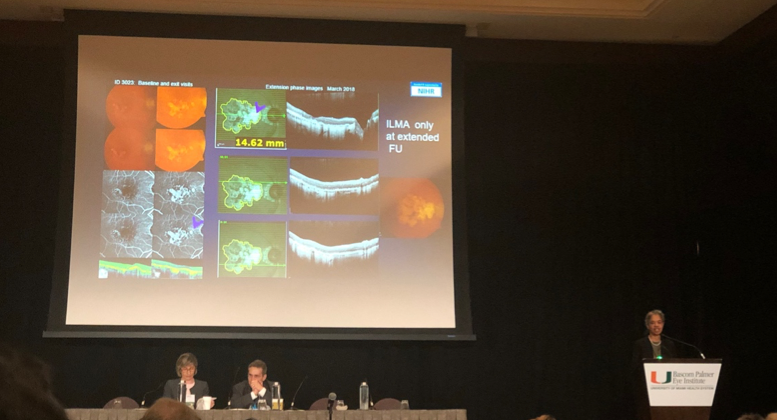 Dr. Chakravarthy summarized that while evidence that anti-VEGF therapy promotes atrophy is lacking, it is evident that loss of RPE and outer retina has significant functional impact on measures of vision and quality of life, and that concerns remain on the potential for over treatment with injections (especially once the exudative manifestations of neovascularization have been controlled). 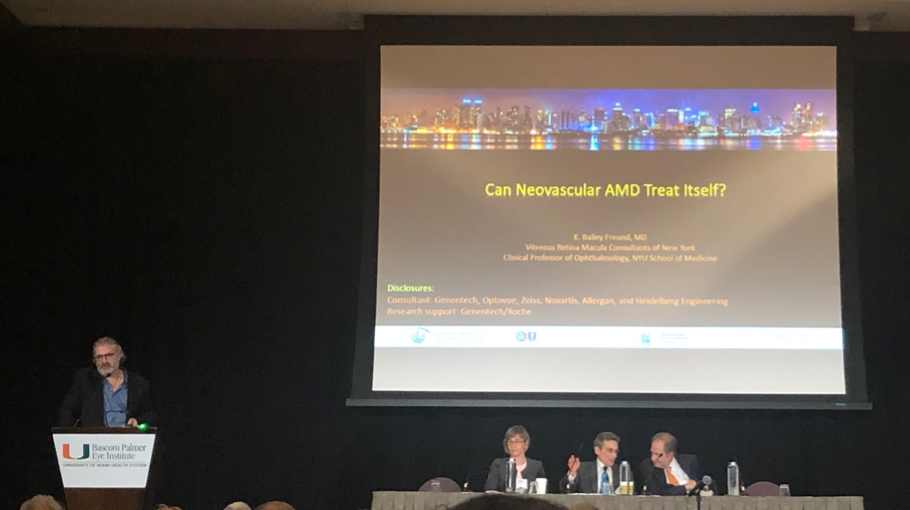 Bailey Freund, MD followed with an intriguing talk on the adaptive, supportive, and nutritional nature of Type I CNVs in AMD. He cautioned against obliterating this protective mechanism that may help prevent the development of macular atrophy. He showed a number of cases where he provokingly extended treatment as Type I CNVs approached subfoveal areas. He showed preservation of vision and retinal structures with the development of Type I CNV. 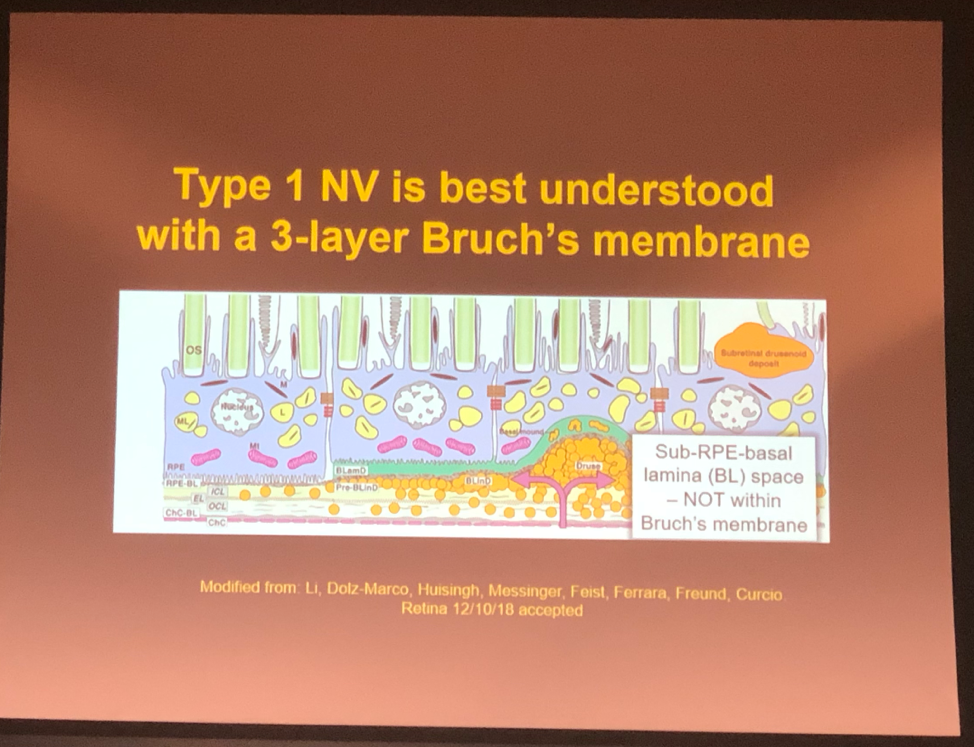 Dr. Freund proposed that future management may transition to an individualized titration of anti-VEGF treatment in parallel with OCTA monitoring to better preserve vision in patients with CNV or atrophy. He warned that these patients need to be carefully selected and that there is no benefit to intentionally undertreat. The session changed gears slightly with a talk by David S. Boyer, MD. Dr. Boyer highlighted research characterizing the role that integrins and integrin receptors play in inflammatory and VEGF-mediated processes of eye disease. Specifically, he looked at how Risuteganib was shown to reduce neovascularization in an ischemic retinopathy model. He demonstrated that it is a safe medication, and that 3 monthly injections of risuteganib was non-inferior to monthly bevacizumab at 20 weeks. He also discussed SF0166 (a selective small-molecule inhibitor of integrin that is administered topically) and THR-687 (a potent RGD integrin antagonist that inhibits angiogenesis-induced vascular leakage). 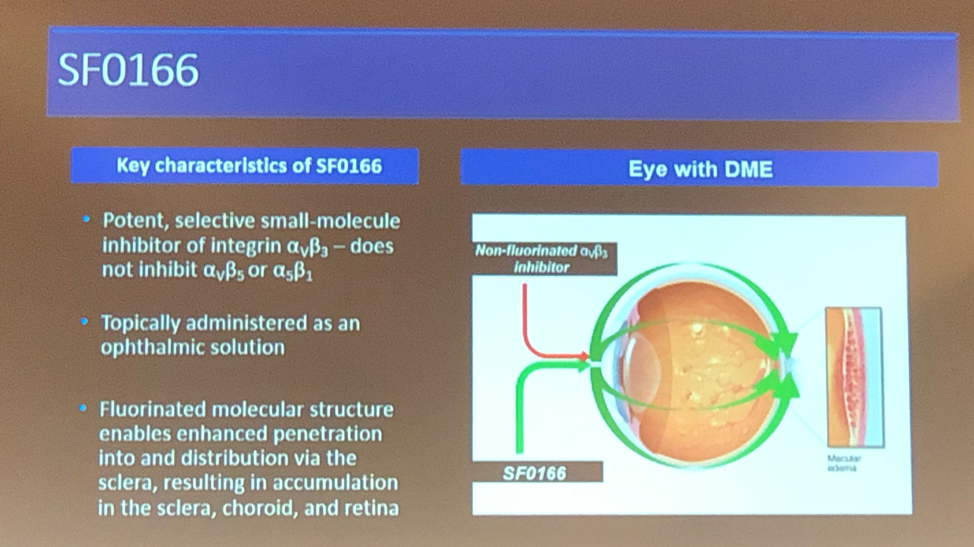 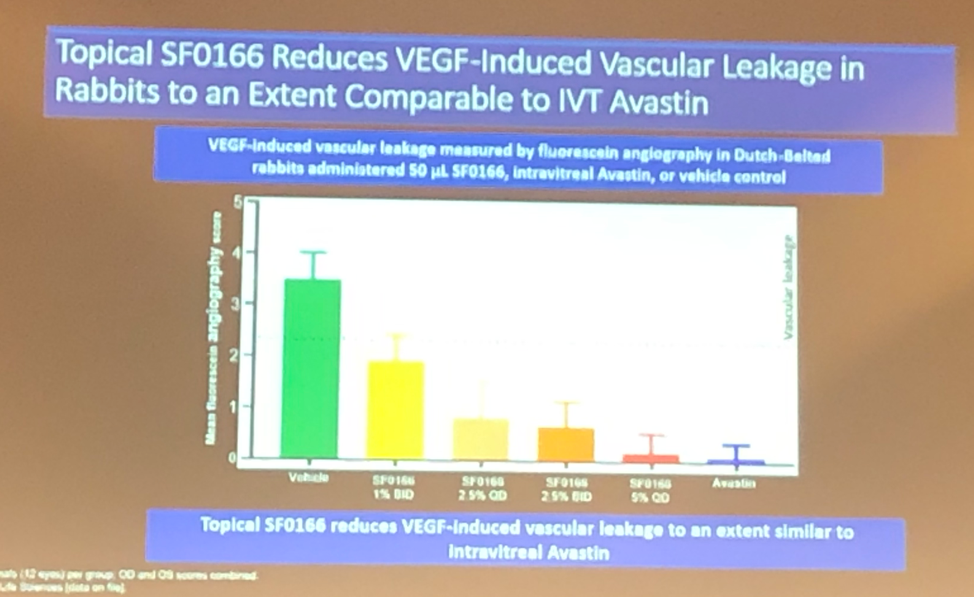 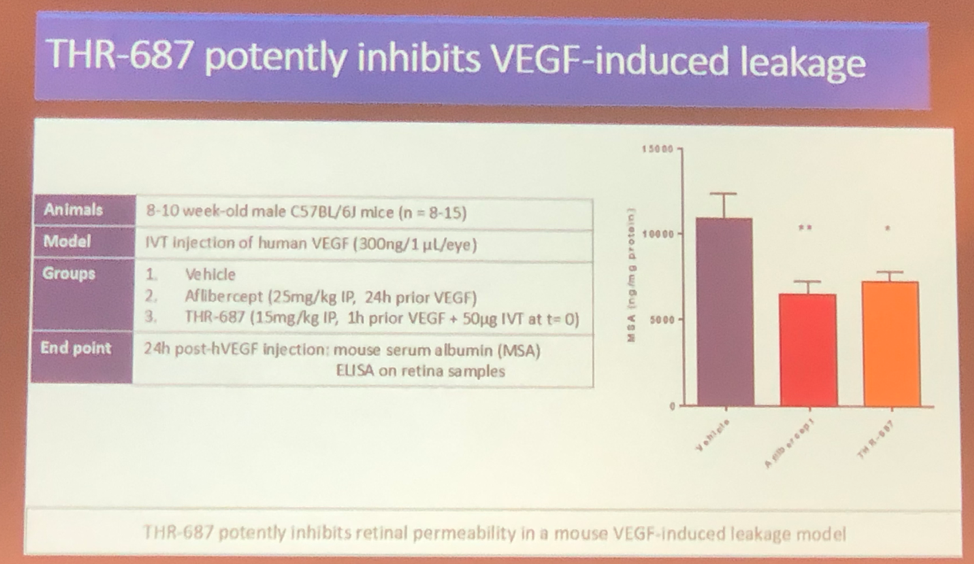 Next up, was Peter K. Kaiser MD who demonstrated the different VEGF receptors used in anti-VEGF blockade. He highlighted that while standard anti-VEGF therapies only block VEGF-A, there is a novel biologic medication (OPT-302) currently in Phase trials that inhibits all VEGF receptors (A through D). He theorized that in typical biologic processes, when one pathway is limited, adaptation upregulates similar pathways to maintain balance. He suggests that blocking all VEGF-receptors will limit the capacity for this roundabout. 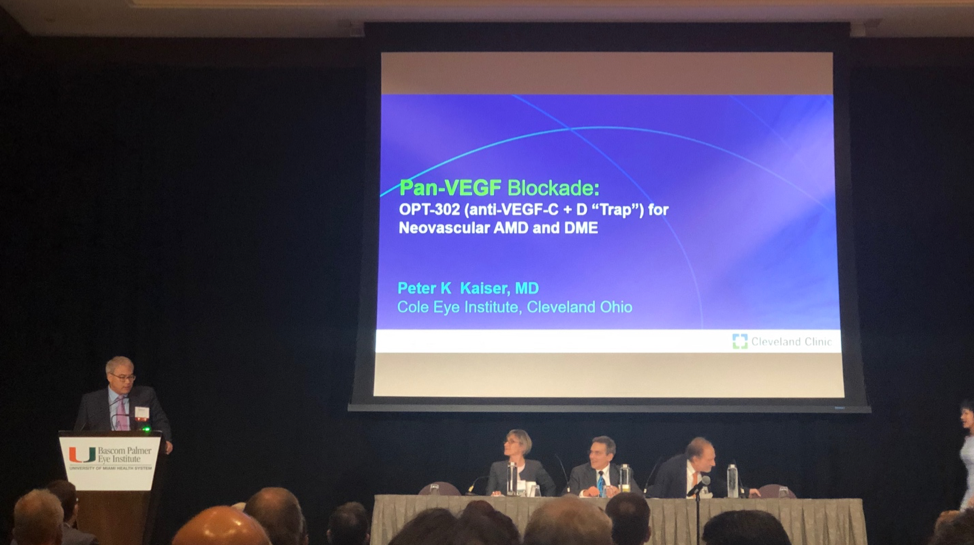 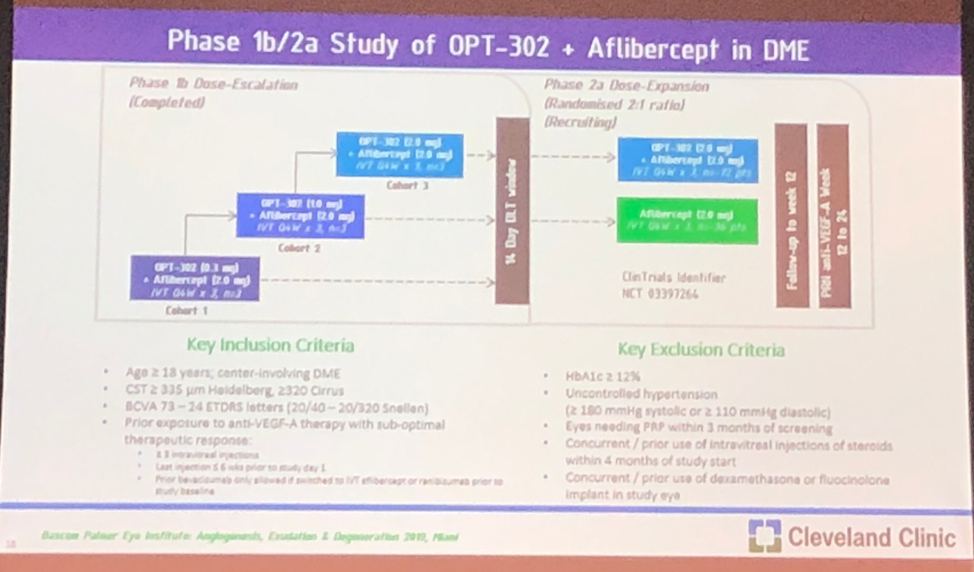 Diana V. Do MD described a novel antibody-biopolymer conjugate for anti-VEGF therapy that promises to enhance the durability, tissue bioavailability, biocompatibility, and stability of the medication. She shared Phase 1a single ascending dose study results that showed their compound to be well tolerated and to have rapid onset gains in BCVA and retinal thickness with sustained improvement over 12 weeks. 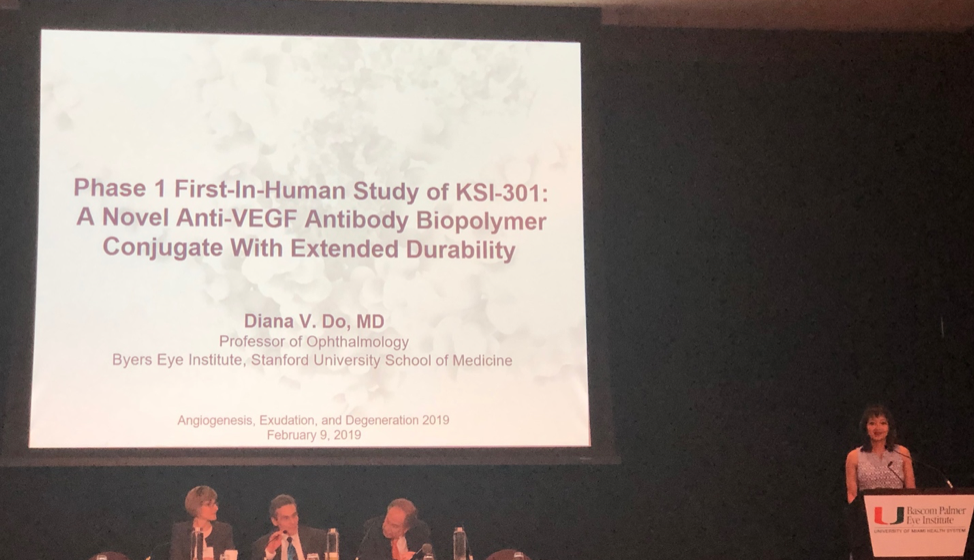 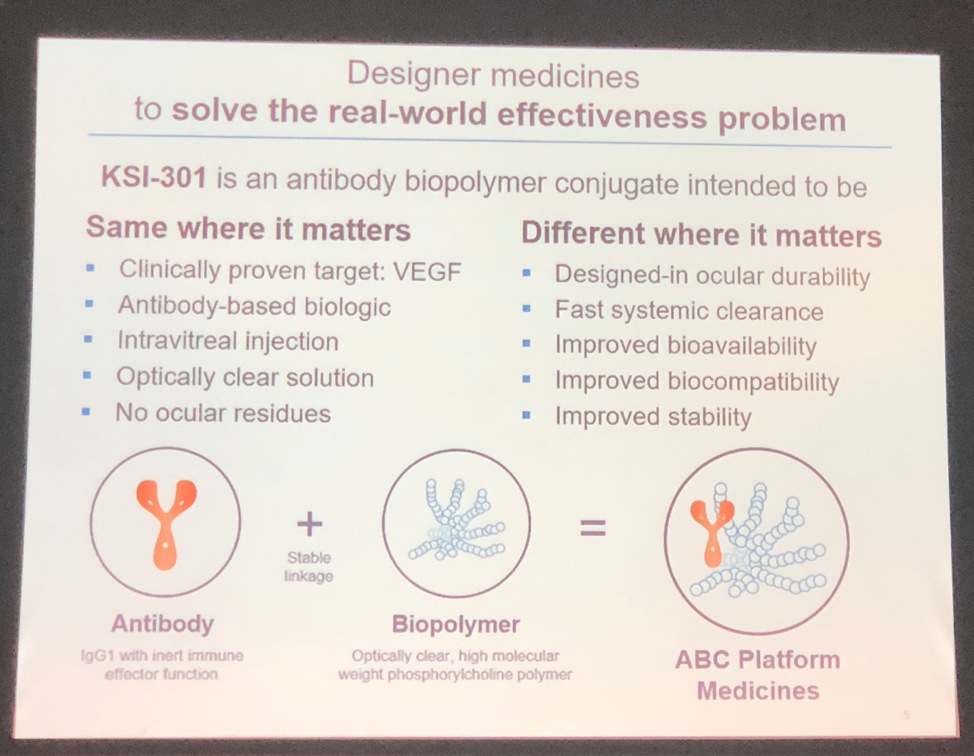 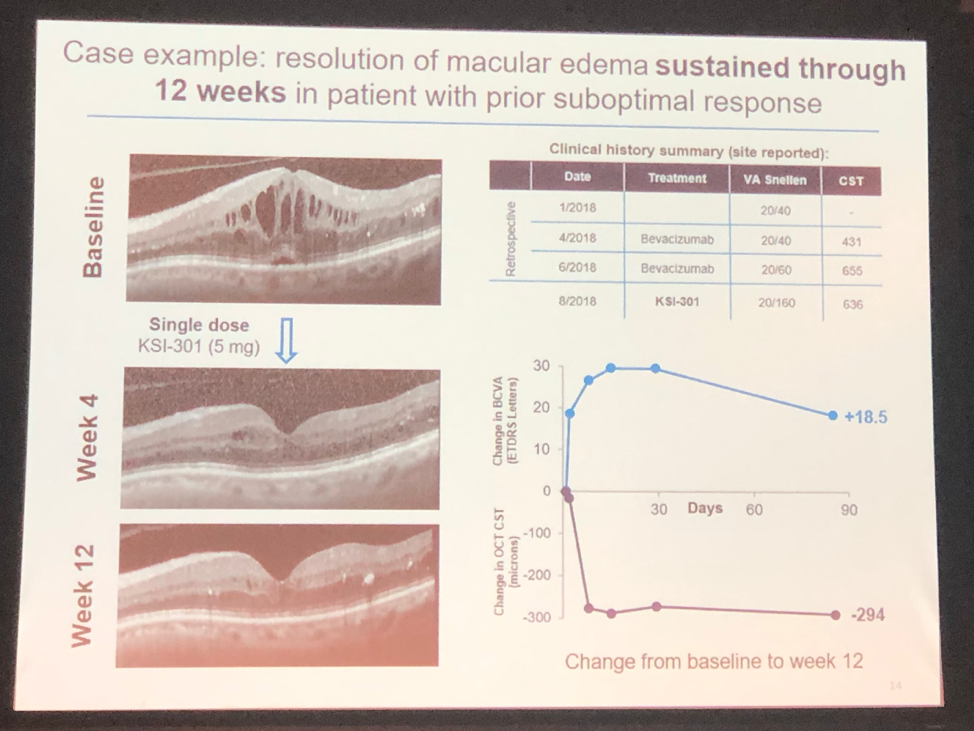 Carl Regillo MD FACS then described the phase 2 results of the Ladder study, which examined the sustained release ranibizumab implant. 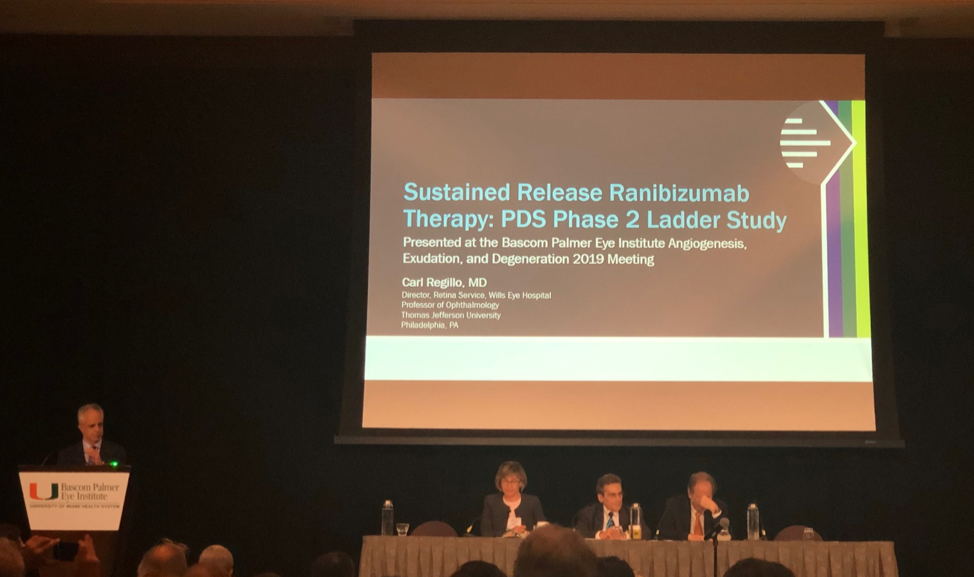 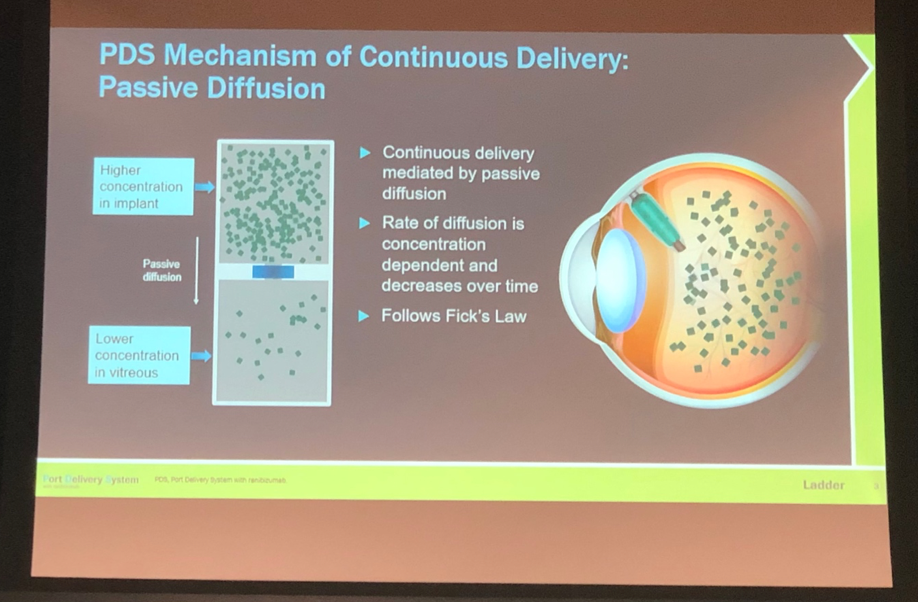 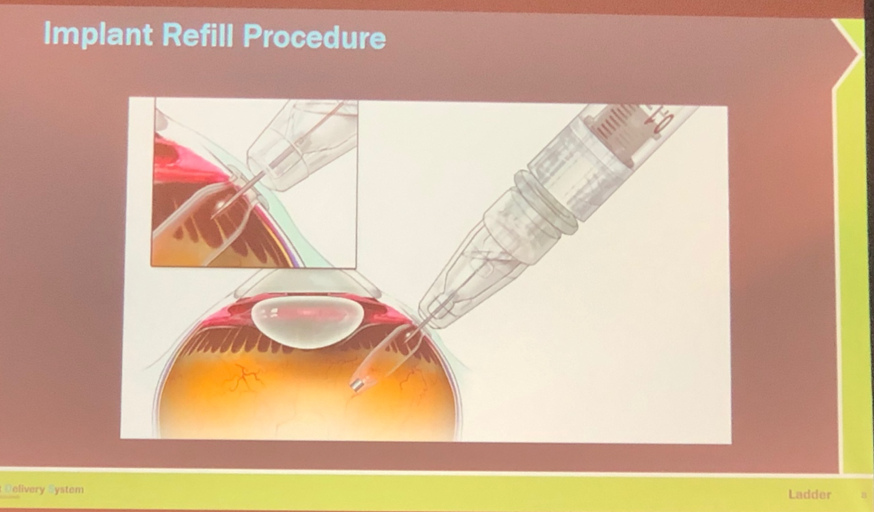 He highlighted that while early on the trial was put on hold for a high incidence of vitreous hemorrhage, re-design with external photocoagulation of the choroid prior to implantation has mitigated most perioperative hemorrhage rates (4.3%). Primary end point in the study is time to first refill, and results are promising:

David S. Boyer MD then described a potent pan-VEGF inhibitor packaged as an intravitreal injection depot (sunitinib). He too highlighted the benefits of pan-VEGF receptor blockade. 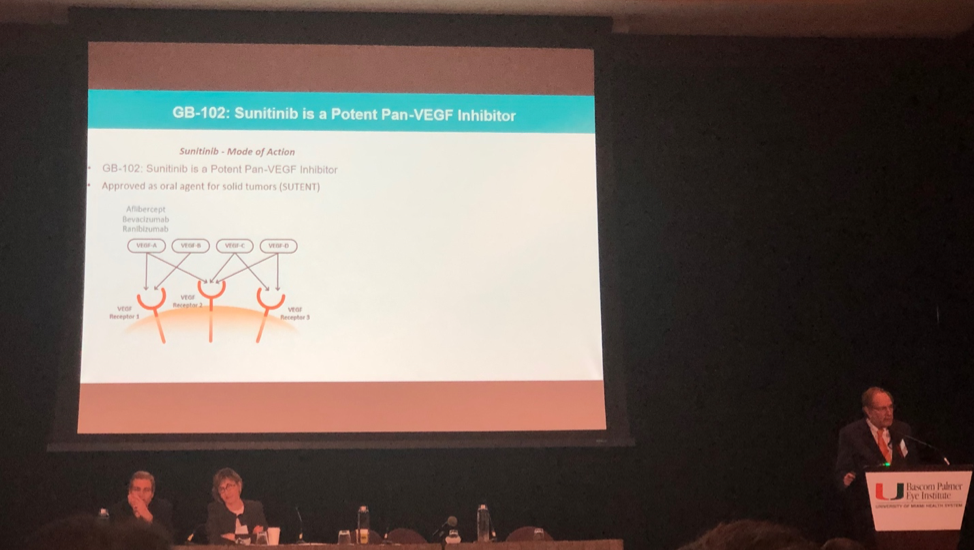 He did note early challenges with medication migration into the anterior chamber, vitreous floaters, medication residue, and elevated IOP. But with a new formulation, he hopes to alleviate these SAEs. 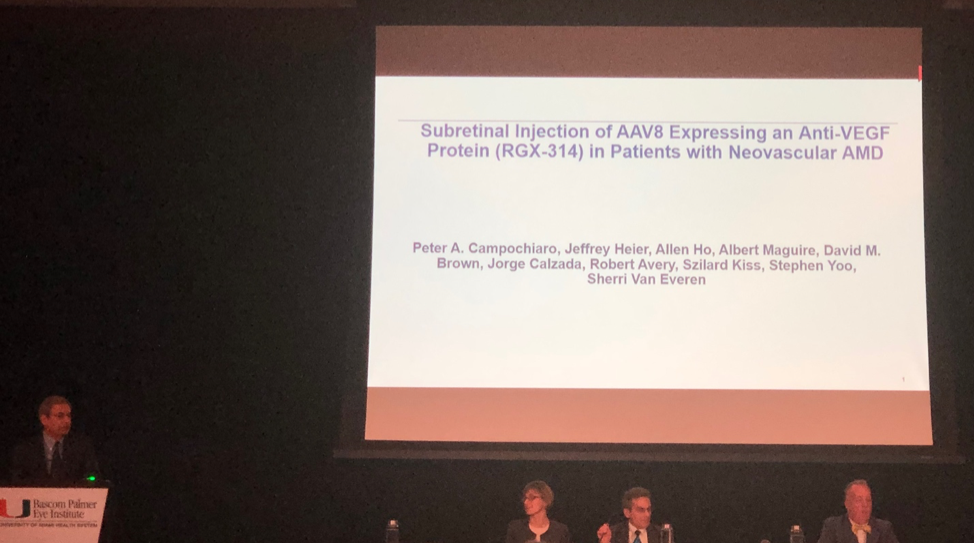 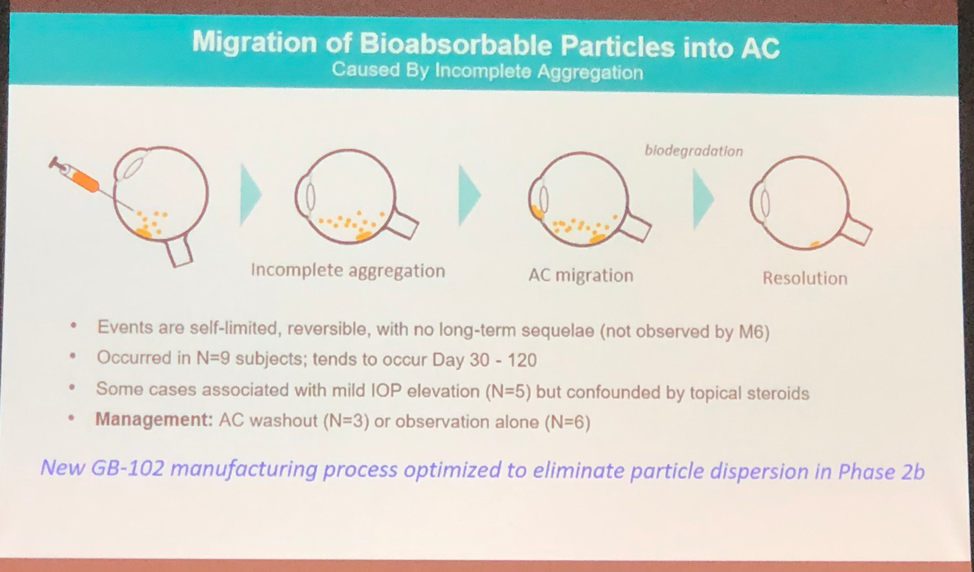 Peter A. Campochiaro MD followed with a fascinating discussion of subretinal injection of AAV8 charged with RGX-314 (anti-VEGF protein) for wet AMD. 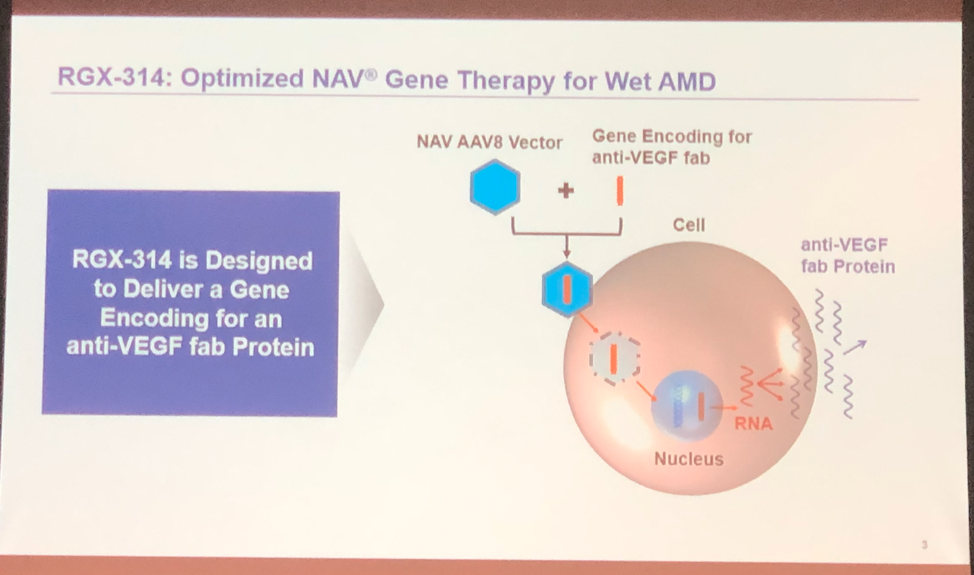 He discussed Phase I trial interim results and highlighted the dose dependent protein expression of RGX-314. He showed that in one cohort, the protein had sustained levels at 6 months with stability in vision and anatomy despite few or no rescue injections. This hopes to serve as a proof-of-concept for gene transfer as a means of sustained delivery of therapeutic proteins into the retina. To round out this session, David M. Brown, MD discussed another gene therapy for treatment of neovascular AMD, this time using a novel virus vector, AAV-7m8, that is injected intravitreally rather than subretinally. This vector, charged with aflibercept, had sustained levels of therapy at 22.5 months after a single intravitreal injection in monkeys. He was excited to share that this medication is currently in Phase I trials and was granted Fast Track in September of last year. He expects to have preliminary data either later this year or 2020. 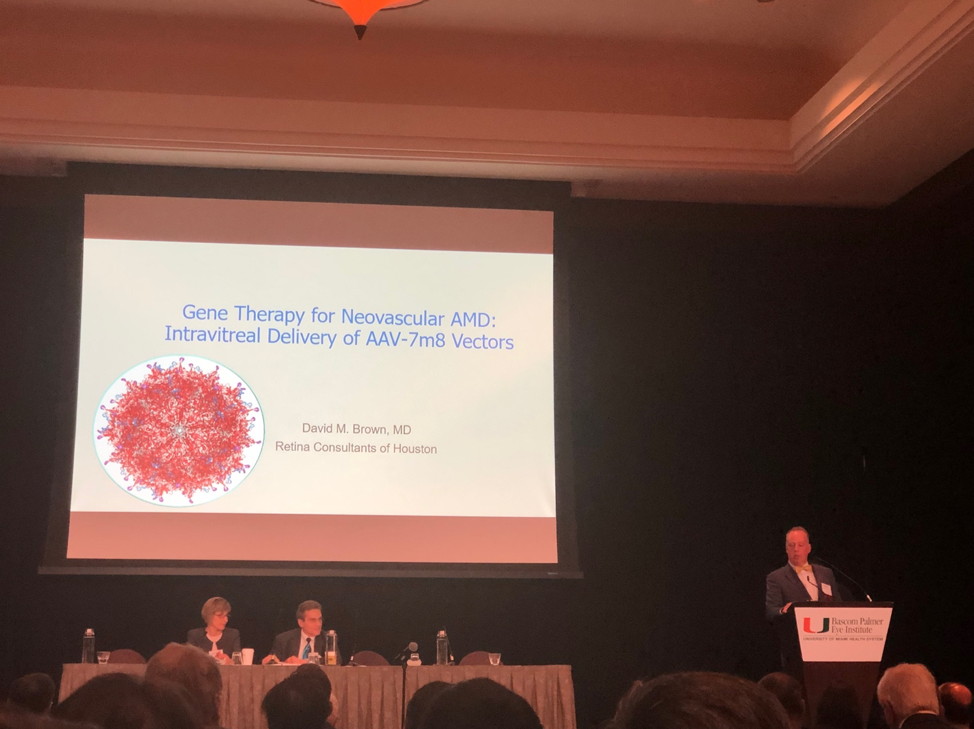 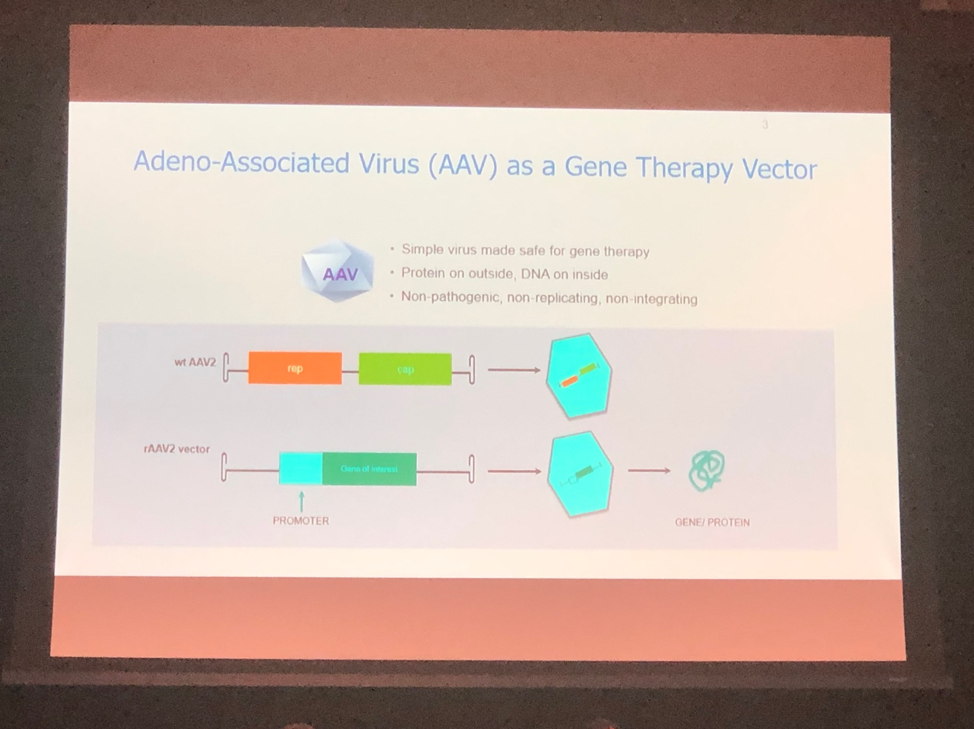