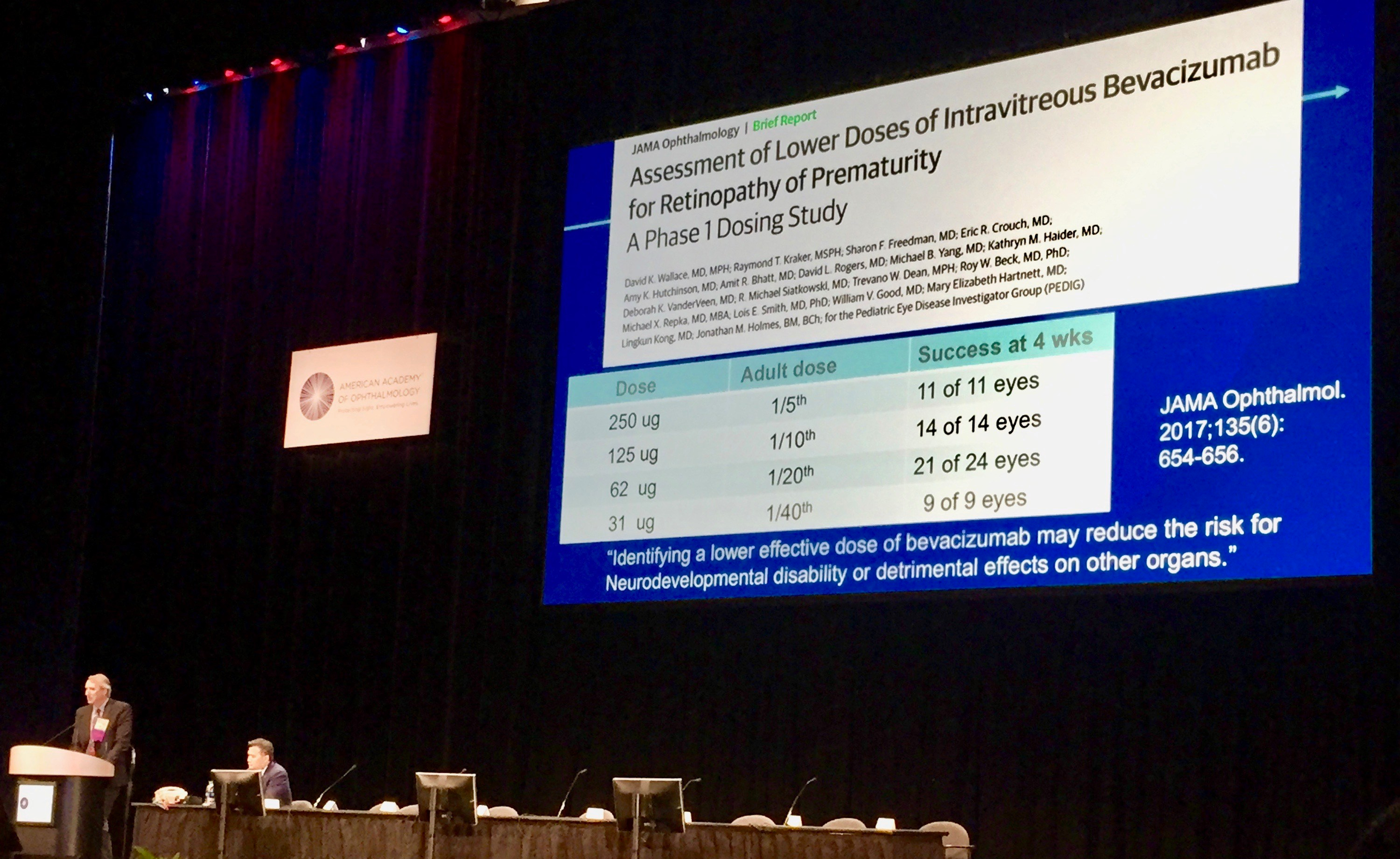 Dr. Avery[/caption] Robert L. Avery, MD led a discussion on dosing specifications for anti-VEGF use in ROP with his talk titled “Anti-VEGF for ROP: What Drug and What Dose?.” Dr. Avery has been investigating dose dependent effects of anti-VEGF medications on retinal vasoproliferative disease for many years. Over a decade ago, he showed that standard dose bevacizumab was potent enough to elicit fellow eye effects in proliferative diabetic retinopathy, and 100 to 200 fold reduction in the bevacizumab dose was sufficient to achieve adequate ocular treatment with lessened systemic exposure. Similarly, high dose bevacizumab for treatment-requiring ROP can cause fellow eye effects and may be associated with systemic exposure risks. Dr. Avery reviewed recent reports on the safety of anti-VEGF in the neonatal population, emphasizing that the long-term effects of these drugs in this population are unclear. Neurodevelopmental delays consequential to anti-VEGF remain a concern, though studies are limited by bias and their retrospective nature. He pointed out that lower doses of bevacizumab have been shown to be effective in treatment-requiring ROP with no significant difference in disease recurrence. Similar findings exist for Ranibizumab. Dr. Avery finished his talk by touching on findings in the RAINBOW study which compared laser photocoagulation versus Ranibizumab, explaining that both doses of Ranibizumab barely missed their stated end-point for superiority to laser, and importantly, no reduction in systemic VEGF levels was found. To summarize, his talk highlighted the effectiveness of anti-VEGF treatment for ROP even at lower doses than typically employed, and cautioned the importance of avoiding systemic toxicity. [caption id="attachment_2616" align="alignnone" width="3060"] 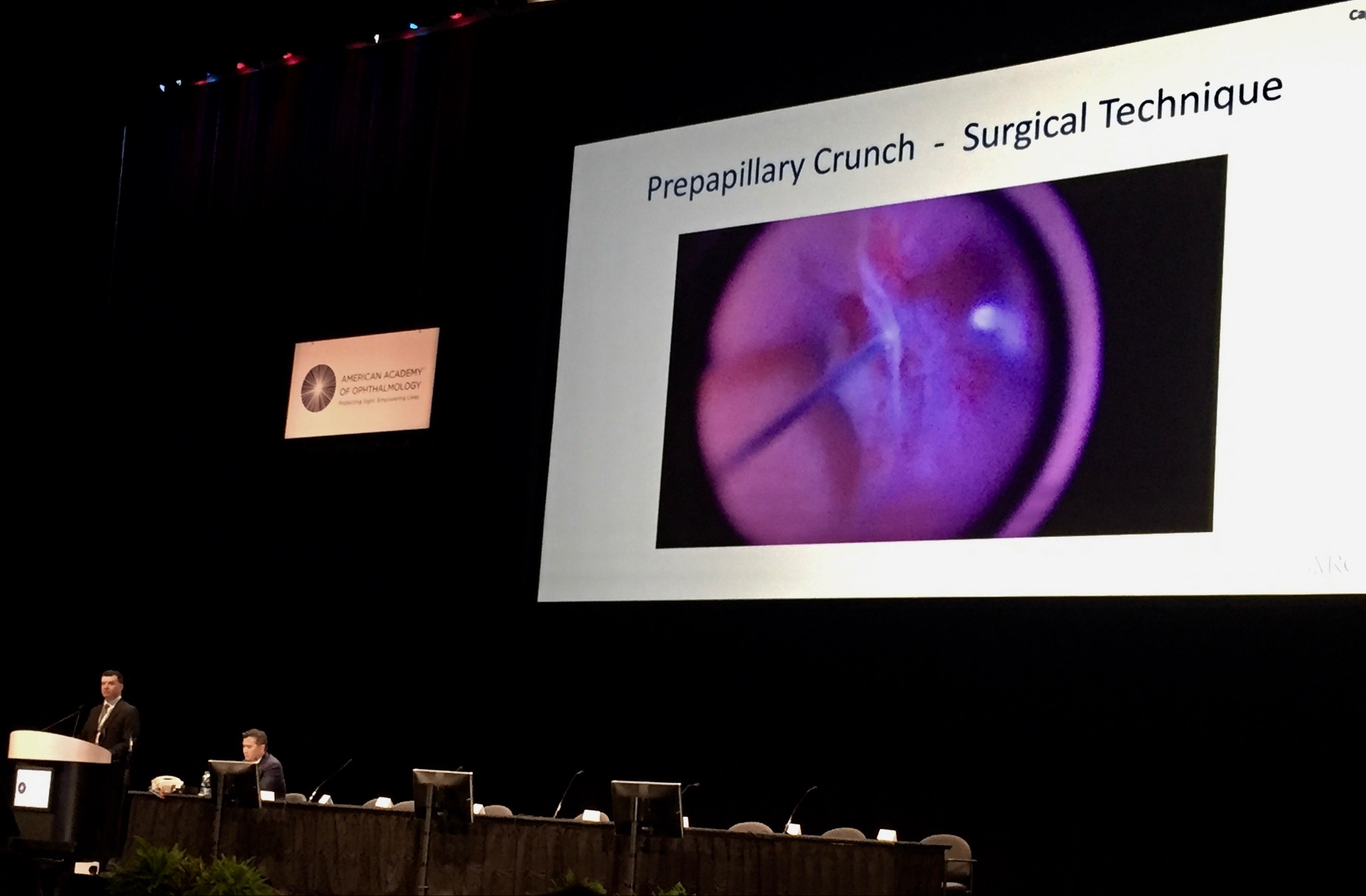 Dr. Capone[/caption] Dr. Antonio Capone Jr., MD followed Dr. Avery with a discussion on a related ROP topic – the risk of “crunch” phenomenon following anti-VEGF use in ROP infants. His talk was titled “Clinical Features and Management of ‘Crunch’ Detachments Following anti-VEGF Treatment for ROP.” Dr. Capone explained that while anti-VEGF drugs offer a powerful treatment approach for severe ROP, the post therapeutic unpredictability of these agents is “unsettling.” The so-called “crunch” phenomenon that can ensue following anti-VEGF treatment in infants with ROP is marked by the development of a tractional retinal detachment following injection. Dr. Capone explained how the milieu of cytokines in anti-VEGF treated eyes can lead to TRD, with unopposed TGF-ß in face of VEGF suppression leading to fibrovascular proliferation and consequently an accelerated tractional retinal detachment. This is the same effect that can be seen in PDR eyes receiving anti-VEGF treatment. Connecting back to Dr. Avery’s discussion, Dr. Capone noted the fellow-eye effect seen with bevacizumab may lead to bilateral “crunch” in the setting of a single injection in an infant with ROP. He reviewed a recent impressive study of 25 eyes of 23 infants treated with anti-VEGF for ROP, wherein tractional detachment occurred a mean of 70 days after injection, with detachments occurring as early as 1 week after injection, and for 50% of eyes within the first month. Two forms of “crunch” detachment were observed. The first is an arcuate or circumferential TRD and the second a posterior pre-papillary form occurring as a consequence of contraction of prepapillary hyaloid. Both configurations are amendable to surgery as long as there is persistent sub retinal fluid Dr. Capone says. He explained that once retina to retina apposition is present, little is to be gained by vitrectomy. Sheets of hyaloid can be delaminated and use of a 27g vitrector offers access to tight surgical spaces. Re-apposition of the retina can promote further vascularization out to the periphery and persistent avascular retina should be treated by FA-guided laser photocoagulation. In summary, he emphasized that late reactivation and crunch detachments have unique anatomy and present unique surgical challenges, but if approached carefully, repair of the these detachments can offer a chance for vision salvage. [caption id="attachment_2617" align="alignnone" width="3264"] 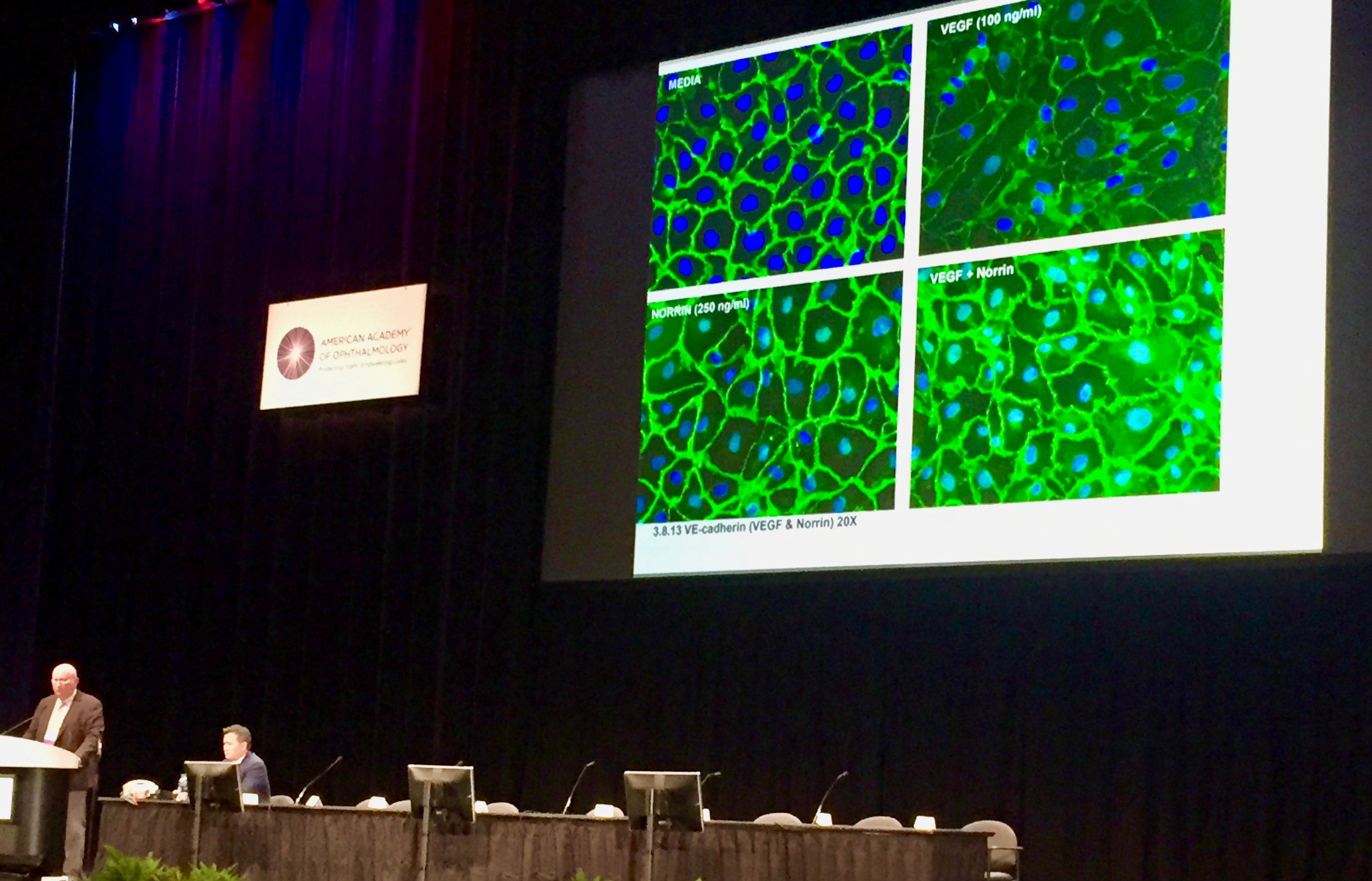 Dr. Trese[/caption] Next, Dr. Michael T. Trese, MD discussed the cellular pathology belying pediatric retinopathies and spoke on the significance of Wnt signaling pathways in pediatric vitreoretinopathies and the importance of related angiographic signs. His talk was titled Repair and Regeneration “Wnt Signaling: What and Why.” Dr. Trese emphasized a new way of thinking about repair of retina vascular disease and suggested that all retina vascular diseases with capillary dropout may be described angiographically by the “LAPPEL” sign (or Late Fluoroscein Angiopgraphic Peripheral or Posterior Leakage). The LAPPEL sign is seen on FA as a result of endothelial cell damage and damage to tight junctions and was first described by Dr. Trese and colleagues in FEVR. Dr. Trese advocates that rather than simply treating vascular retinal diseases with anti-VEGF, treatment may be aimed at improved cell health and primary repair of tight junctions. He reviewed important aspects of the Wnt pathway in this process, emphasizing the role of Norrin protein in angiogenesis and neurogenesis and retinal endothelial and ganglion cell health. Dr. Trese offered that “facilitation of capillary neuronal growth by invoking Norrin Wnt signaling system is a new therapeutic approach which mobilizes a large number of proteins for a single purpose and has promise as a single or combination agent” for treatment of vascular retinal disease. As Norrin produces proteins that support repair and regeneration, it is hopeful that Norrin directed therapies may help reduce VEGF drive and one day have a clinical hand in disease control. [caption id="attachment_2618" align="alignnone" width="3264"] 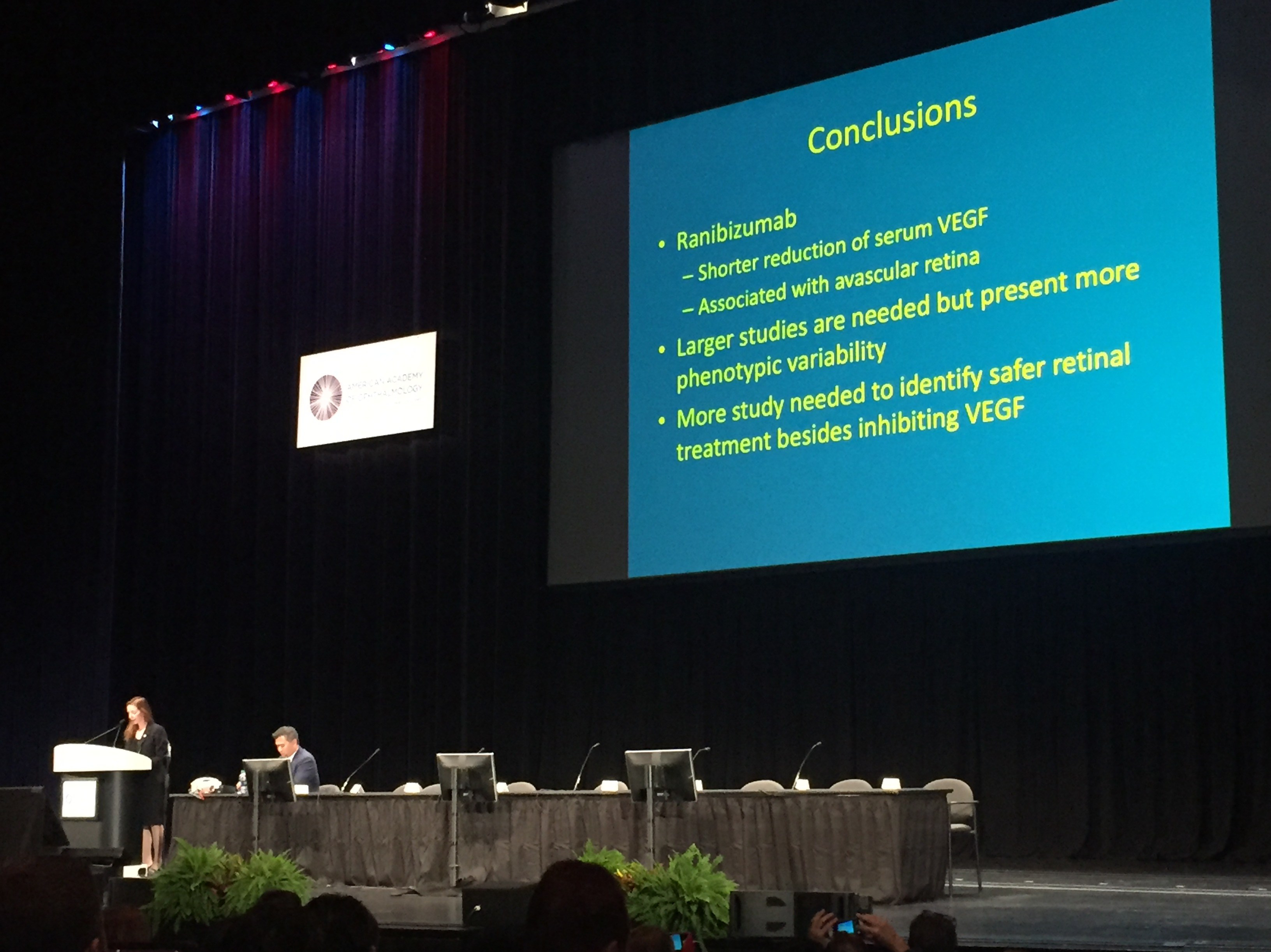 Dr. Hartnett[/caption] While Norrin-based therapies may have exciting potential, current standards for medical therapy of pediatric vascular disease remain centered on anti-VEGF drugs. And with that, returning to the topic of ROP, Dr. Mary Elizabeth Hartnett, MD, FACS rounded out the Pediatric Retina section with her discussion of the latest findings in key clinical trials for anti-VEGF treatment in ROP. Her talk was titled “Anti-VEGF Treatment for ROP: Clinical Trials and Phenotypic Differences Worldwide.” She spoke on the off-label use of bevacuzimab and ranibizumab in ROP treatment and difficulties with interpreting clinical results from present studies. She cited that multiple studies have shown that anti-VEGF effective in the treatment of ROP, however a recent Cochrane report of six studies on the topic showed insufficient data to assess the risk of RD or risk of recurrence following anti-VEGF treatment for ROP. The reasons for failure of the studies may be because of differences in infant phenotype (genotype and environmental interactions) and other characteristics. Dr. Hartnett explained the outcomes of two recent studies and one clinical trial involving the effectiveness and sequelae of anti-VEGF treatment for ROP. ROP1 evaluated de-escalating doses of bevacizumab for type 1 ROP (0.25mg to 0.031mg) and found 80% reduction in type 1 ROP with no repeat treatment up to 1 month. Care-ROP evaluated 2 doses of ranibizumab (0.12 vs 0.2 mg) in 19 infants with more severe forms of ROP and found only two rescue re-treatments after 28 days, but 4 eyes had additional ranibizumab injections after 28 days, up to 24 weeks. In ROP1, 18% of infants showed persistent avascular retina at 6 months, and in Care-ROP 45% of infants in the 0.12 mg group showed persistent avascularity at 24 weeks post-treatment and 84% in the 0.2mg group. Indications for treatment and outcome measures varied between the studies, and different methods were used for determining persistent avascularity (exam or fundus imaging); neither study employed fluorescein angiography. The studies evaluated two different anti-VEGF drugs, and as the study populations and outcomes varied, the studies cannot be directly compared. The RAINBOW trial is a multicenter RCT that evaluated ranibizumab in two doses (0.1mg vs 0.2 mg) versus laser photocoagulation for zone I plus, zone II stage 3 plus, or APROP in 181 infants. Tests for superiority of 0.2 mg ranibizumab over laser photocoagulation approached significance and success following laser overall was lower than in ETROP, suggesting a possible benefit to ranibizumab treatment. Dr. Hartnett noted that the RAINBOW study included more severe types of ROP compared to the ETROP study, perhaps confounding the results of laser treatment. To summarize, Dr. Hartnett emphasized that phenotypic differences and infant characteristics should be considered when considering study results and further study is needed to compare anti-VEGF outcomes. [caption id="attachment_2619" align="alignnone" width="3264"] 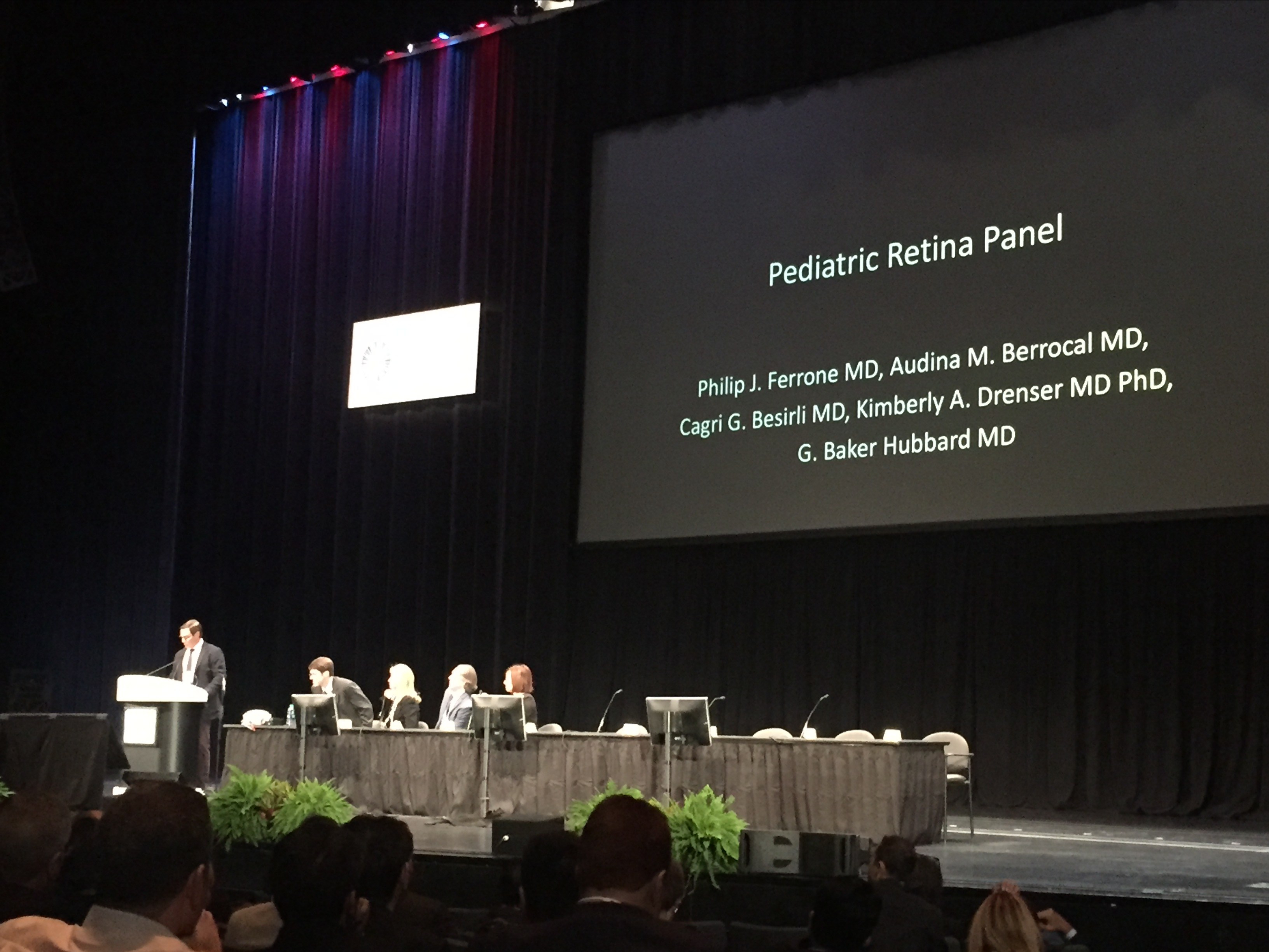 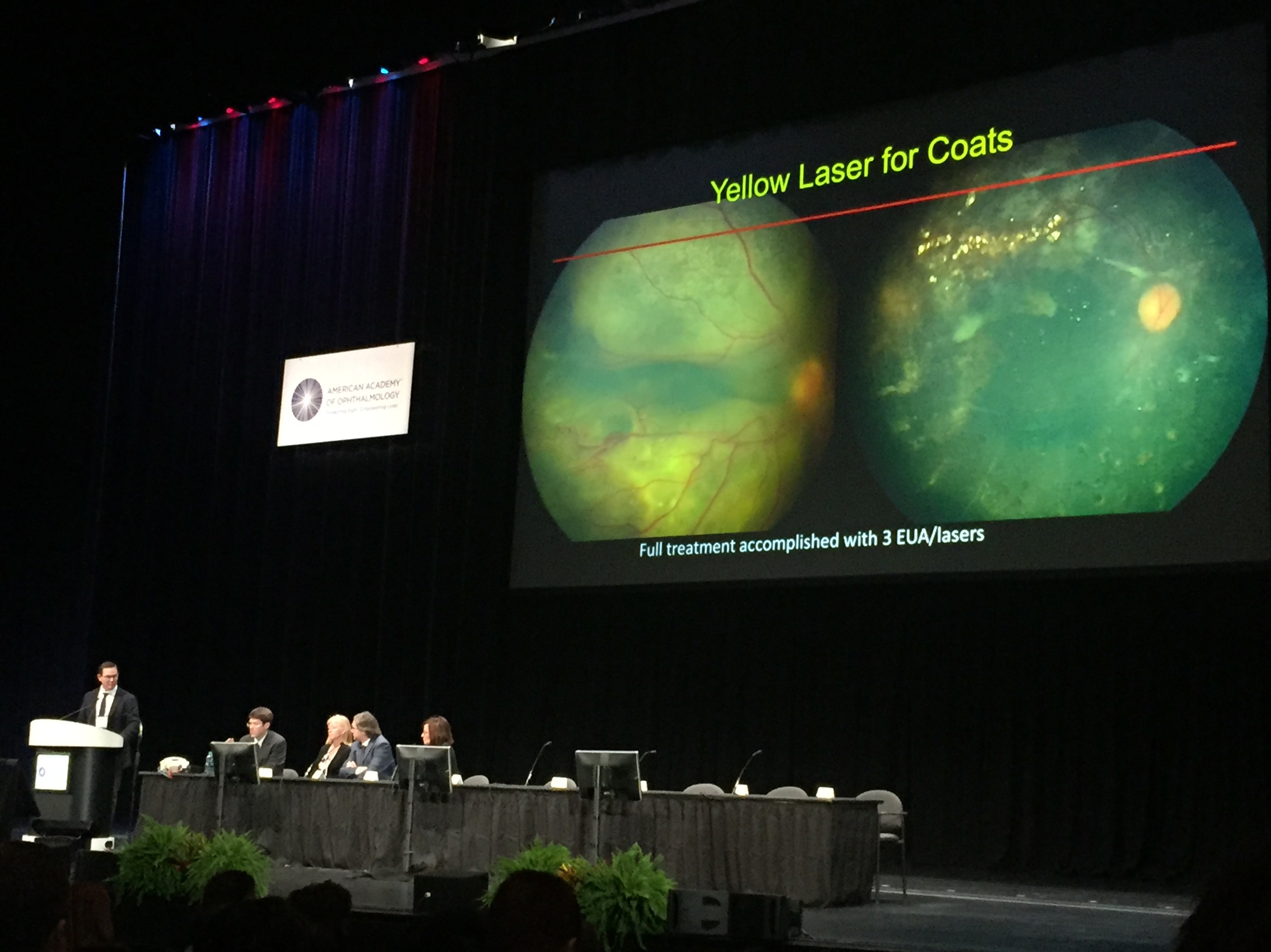 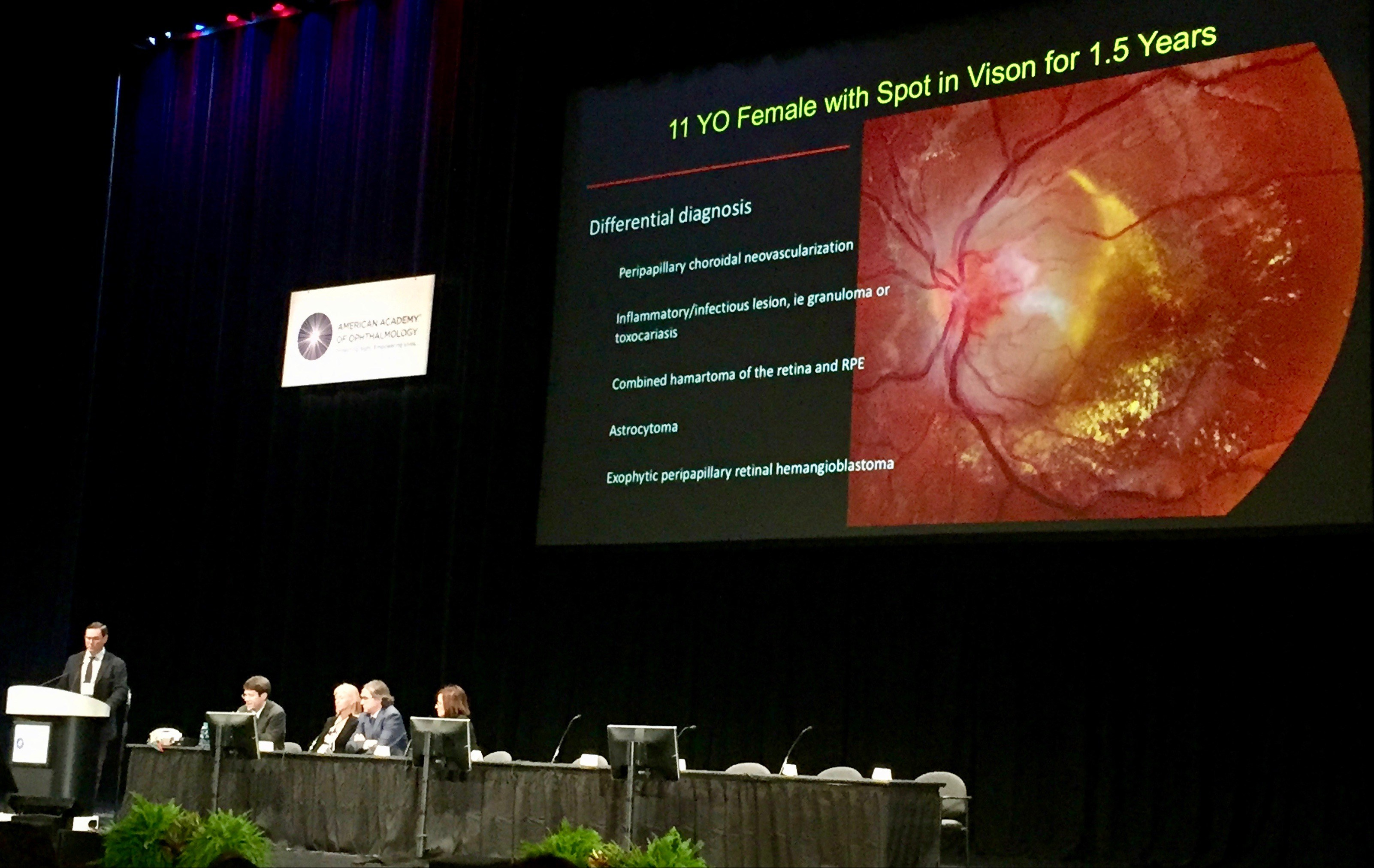 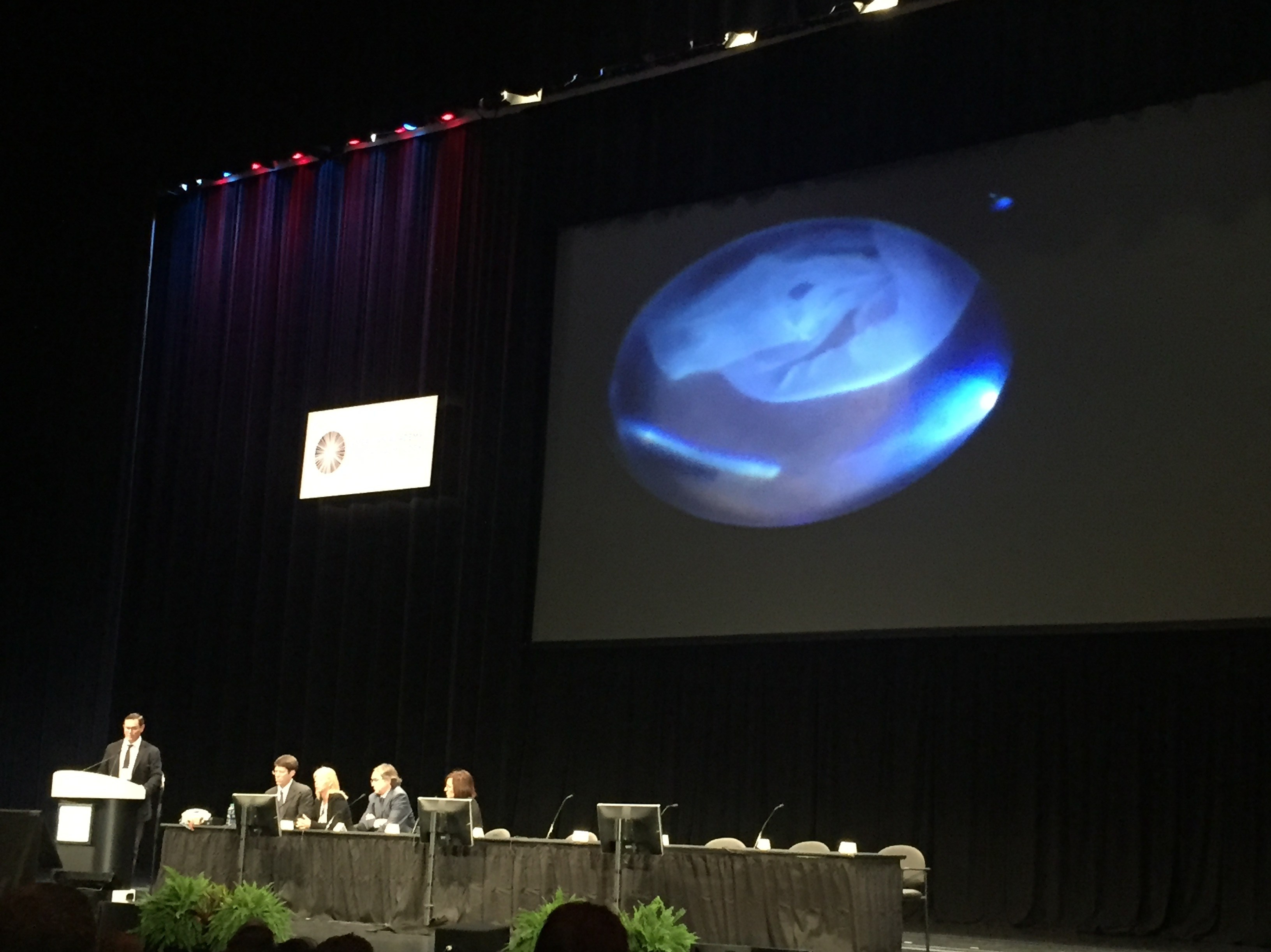 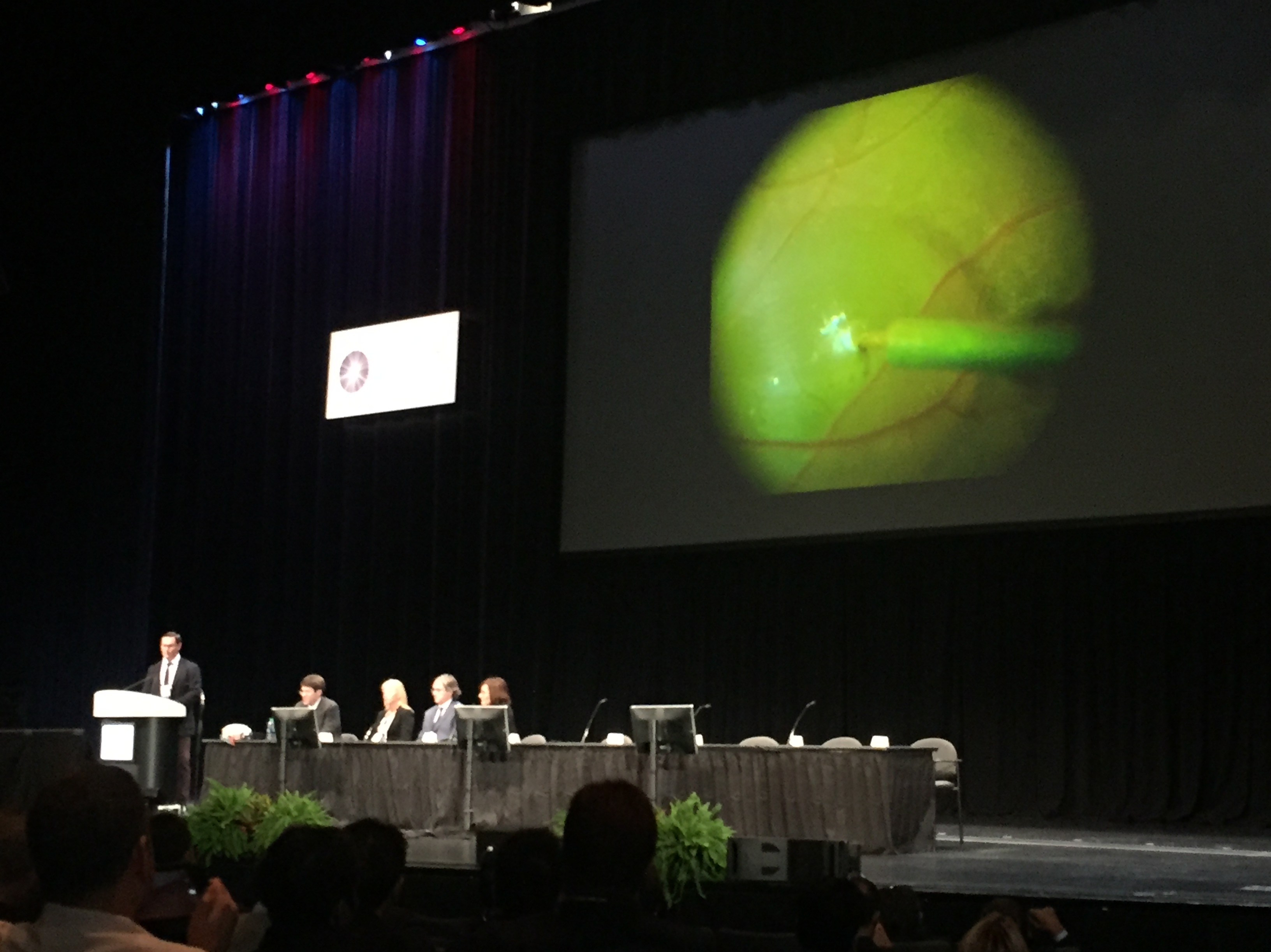 On day two of Sub-Specialty Day, a great presentation on multimodal imaging for vitreoretinal surgical planning was given by Dr. Cynthia A Toth MD. In her talk, Dr. Toth discussed the benefit of peri-operative planning to assess, document, compare, and communicate disease stage and severity. She pointed out that it is often easier to extract information from color photographs and ultra wide-field SLO than a difficult indirect examination in a child. OCT imaging, because it utilizes infrared wavelengths, is comfortable and often possible in young children. OCT can also provide details not visible on exam and can help differentiate cases of RD versus schisis and can help guide management. Fluorescein angiography provides critical information on vascular perfusion, neovascularization, and RPE/choroidal abnormalities. She referenced numerous publications that described off label use of oral rather than intravenous fluorescein angiography to assess retinal vascular disease in children in clinic. Dr. Toth’s talk included many examples of how thoughtful use of imaging is essential for robust pediatric vitreoretinal surgical planning. She addressed that a child friendly environment is key for successful imaging. The field of pediatric retina has seen considerable advancement and continues to offer exciting progress in patient care options. This year’s subspecialty day offered an important mix of key topics that continue to influence and guide the field, and there will be more to come on all of the topics covered in this year’s pediatric section.