Symptomatic floaters are a common source for frustration for both patients and vitreoretinal surgeons. As care providers, we are committed to improving quality of life through management approaches appropriately balanced in terms of benefits and risks. While vitrectomy is an effective method to reduce symptoms from vision-deteriorating vitreopathy, it is associated with rare but potentially disastrous risks.  In this session, Dr. Chirag Shah described his experience with YAG vitreolysis – an office-base non-invasive procedure to reduce symptoms of vitreous floaters.

While commonly impugned for being an ineffective technique with adverse side effects and significant costs to patients (approximately $1000 - $2000 per eye), meaningful data to support or refute the role of YAG vitreolysis as a bona fide procedure is lacking.  Dr. Shah randomized 52 patients with symptomatic Weiss ring floaters to YAG vitreolysis or sham laser therapy and measured outcomes such as symptom relief, visual function questionnaire performance, and adverse effects. Only 1 laser session was allowed and patients with prior retinal tear, retinal detachment, uveitis or glaucoma were excluded. Patients without posterior vitreous detachments or with floaters close to the retina or crystalline lens were also excluded. 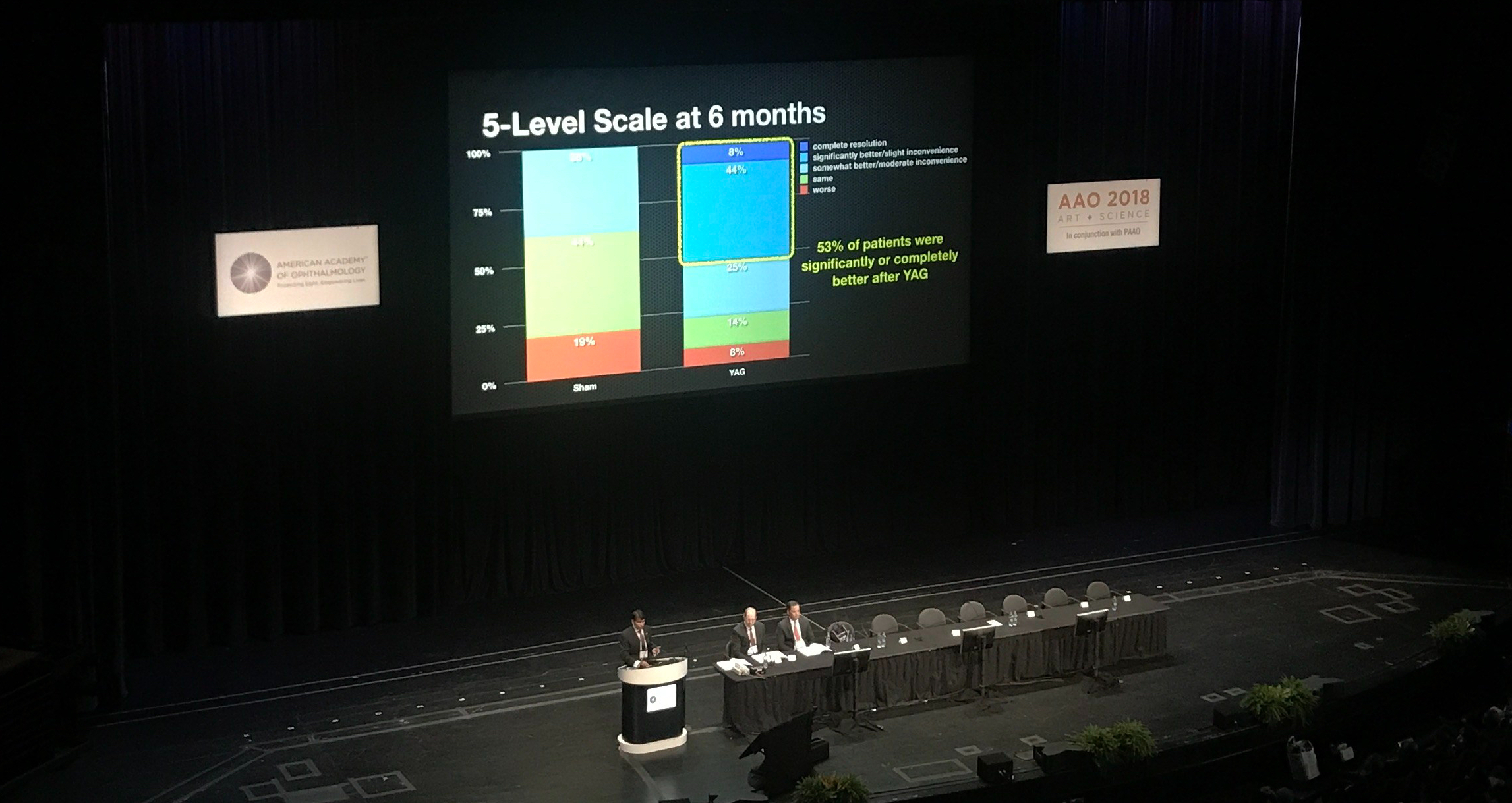 On a 5-point scale of symptomatology (completely resolved, significantly better, somewhat better, same, or worse), 53% of YAG-treated patients had completely resolved or significantly improved symptoms, whereas the sham group had no patients reporting such outcomes. Perhaps more importantly, no patients experienced retinal tear, retinal detachment, elevated IOP, or other significant adverse effects in the 6 month period for the primary endpoints of the study.  These results were previously published in JAMA Ophthalmology. Today, Shah also reported outcomes of extended follow up of these patients over a period of 2-3 years.  About half of patients continued to report complete or near-complete resolution of symptoms in the long term and had favorable changes in VFQ-25 scores. However, 3 patients in the YAG group developed retinal tears greater than 1 year after the procedure, 1 patient developed ocular hypertension, and 1 patient developed vitritis. Nevertheless, the study demonstrates the efficacy and relative safety of YAG vitreolysis as a non-invasive method to manage a potentially difficult patient population while sparing them from the risks of vitrectomy.  This important hypothesis-generating analysis will require further large scale randomized study before YAG vitreolysis is adopted on a wider scale.