Patrick Oellers, MD Vitreoretinal Surgery Fellow Mass Eye and Ear, Harvard Medical School Day 3 of the 50th anniversary Retina Society meeting in Boston, MA continued with interesting talks and sessions.  Below is a summary and the highlights of the second surgery session of the day, moderated by Elliott Sohn and Bernard Doft. 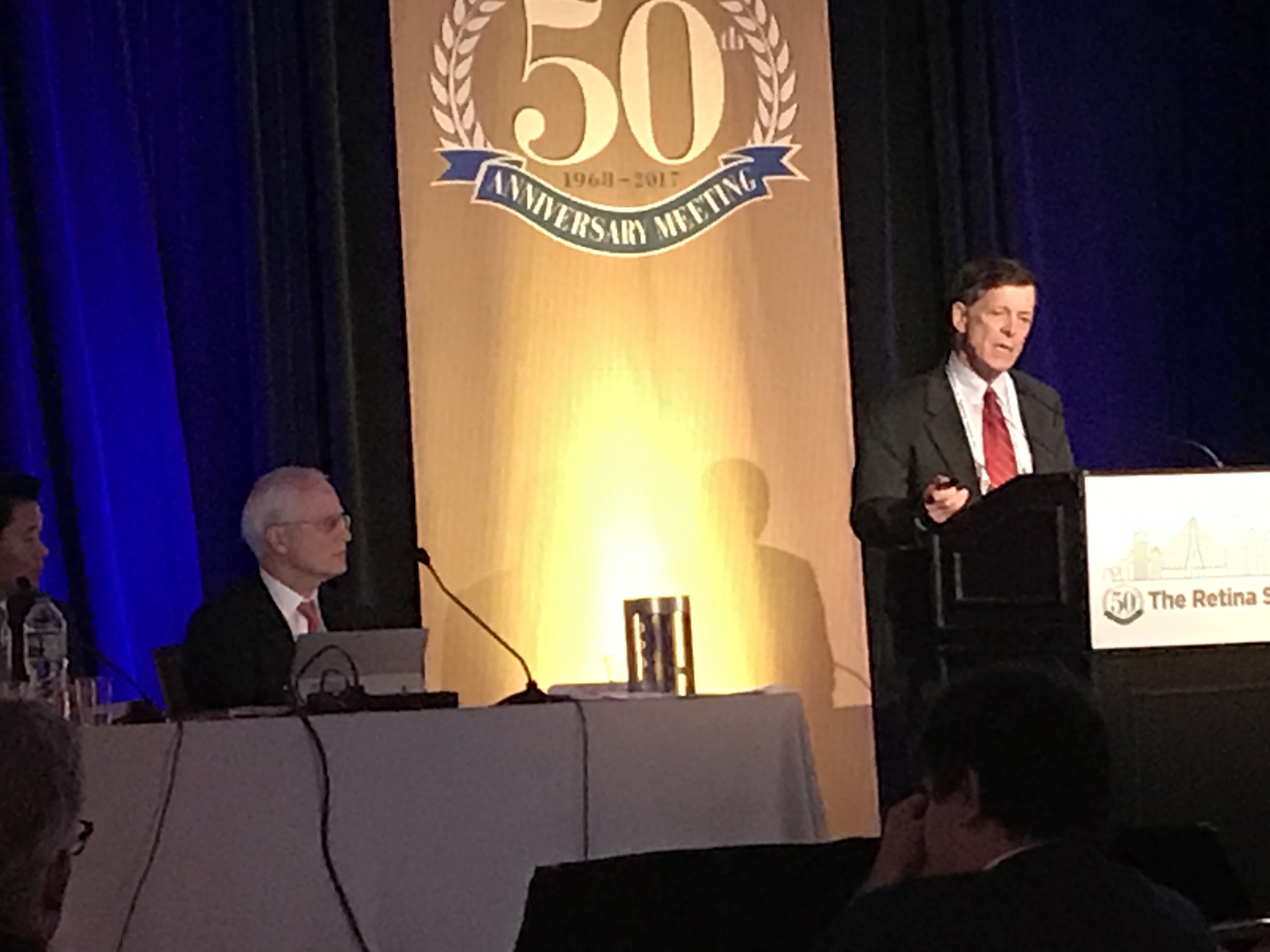 The Surgery II session was kicked off by Adiel Barak, MD who showed an exciting augmented reality video microscope utilizing head wearable technology developed by Elbit Systems.  Interestingly, the lag time of this device is only 12 ms.  The software will be open platform which might enable user-driven application innovation.  This exciting approach offers another potential direction for the future of retinal surgery viewing systems. Elliott Sohn, MD then gave a very interesting talk about posteriorly inserted vitreous base (PIVB), defined as vitreous that could not be induced anterior to the vortex veins (approximately the equator of the eye) intra-operatively. He reported on a retrospective study of 37 patients that underwent vitrectomy surgery for a variety of conditions (mostly rhegmatogenous retinal detachment). The results found that PIVB is associated with a high number of peripheral retinal breaks existing prior to surgery, and that 30% of these eyes developed new breaks intra-operatively secondary to induction of posterior vitreous detachment. He concluded that the clinical relevance of this is that great care should be taken when inducing a posterior vitreous detachment in these eyes, to carefully check the periphery for breaks 360 degrees, and to consider longer acting gas such as C3F8 or silicone oil in appropriate cases. Next, Katherine Talcott, MD informed us about vitrectomy alone, without scleral buckle, for rhegmatogenous retinal detachment with inferior retinal breaks in phakic eyes. The study was a single-surgeon series of 26 consecutive eyes and results demonstrate a single-surgery success rate of 88.5% after a follow up of 3 months (81% at 12 months follow up), which is comparable to prior studies utilizing a combination approach of vitrectomy and scleral buckle. A lively discussion followed this presentation. Along these lines, Ed Ryan, MD reported on outcomes of moderately complex phakic retinal detachments. The study was a multi-center retrospective study that included 261 eligible eyes with primary rhegmatogenous retinal detachment. Patients were either treated with vitrectomy alone, vitrectomy combined with scleral buckle or scleral buckle alone and all surgeons were well trained in each of these approaches. Certain conditions were excluded by the study design aiming to eliminate selection bias towards certain procedures, which is often the problem in interpretation of retrospective studies dealing with outcomes of retinal detachment repair.  For example, significant vitreous hemorrhage was excluded, which would mostly prohibit the use of scleral buckle alone.  Single surgery success was slightly higher for primary scleral buckles, especially compared to vitrectomy alone.  Visual outcomes were favorable in the scleral buckle only group also, highlighting the potential importance of scleral buckling in phakic patients. Next, Daniel Joseph, MD, PhD reported on outcomes of vitrectomy alone versus vitrectomy combined with scleral buckle for repair of pseudophakic primary rhegmatogenous retinal detachments. This was a retrospective multi-center study involving 252 eligible eyes. Anatomic outcomes favored vitrectomy combined with scleral buckle and visual outcomes were similar between both groups. 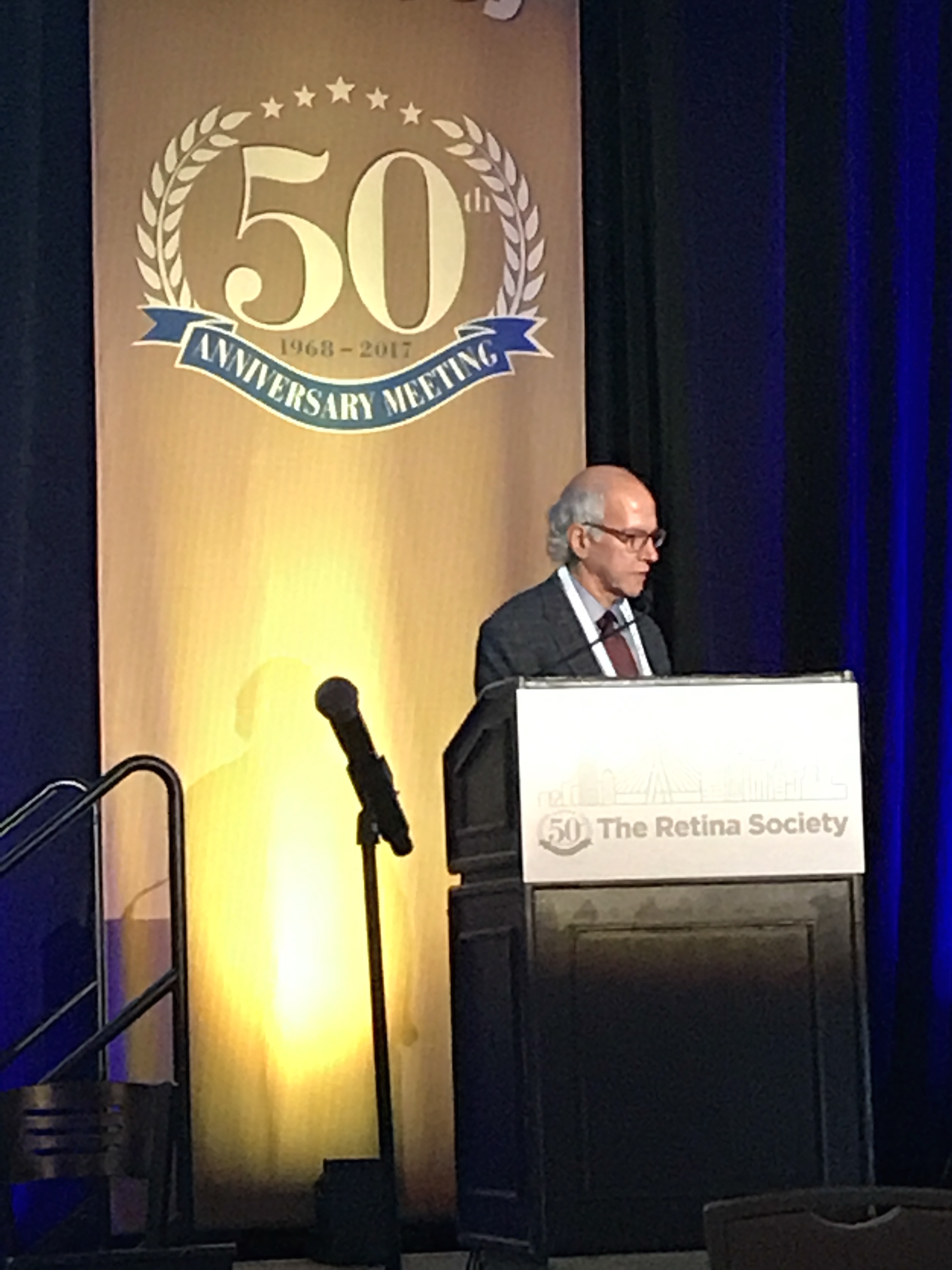 Next, gears were switched towards economical and quality of life analysis presentations. Gary Brown, MD kicked it off with an explanatory introduction of various methods that are used to measure quality of life gains or utility of medical interventions. He then updated us on quality of life improvement in patients who underwent various retinal procedures and compared these with quality of life gains achieved by non-ophthalmic interventions derived from a large validated database. He has found that quality of life gains realized by the various vitreoretinal procedures compare favorably to many non-ophthalmic interventions, something that may be underestimated by the general public, yet probably known to most of our patients. William Smiddy, MD then reported on the results of a cost-utility analysis of screening patients with acute posterior vitreous detachment. The authors found favorable cost-utility ratios supporting the current standard practice of routine urgent evaluation and management of these patients due to minimization of the morbidity and cost associated with development of retinal detachment. Measured against accepted medical cost-utility standards, the routine screening of these patients is quite cost effective and continued stable reimbursement for this without cost reduction appears more than reasonable. The final session of the day was the very exciting late breaking papers session. The symposium was started by the highly anticipated report on the results of the phase-2 trial of Ciliary Neurotrophic Factor (CNTF) for Macular telangiectasia type 2 given by Emily Chew, MD. This was a multi-center, prospective, single-masked, sham controlled trial. Primary outcome was change in ellipsoid zone area on OCT, as visual decline develops only very slowly in these patients and as such is difficult to use as outcome measure.  Secondary outcomes included visual acuity, microperimetry as well as reading speed. The study found beneficial effects of CNTF treatment in terms of difference in ellipsoid area and corresponding functional results such as microperimetry and reading speed compared to non-treated eyes. There were no changes in vision. We are all eagerly awaiting the phase-3 trial. 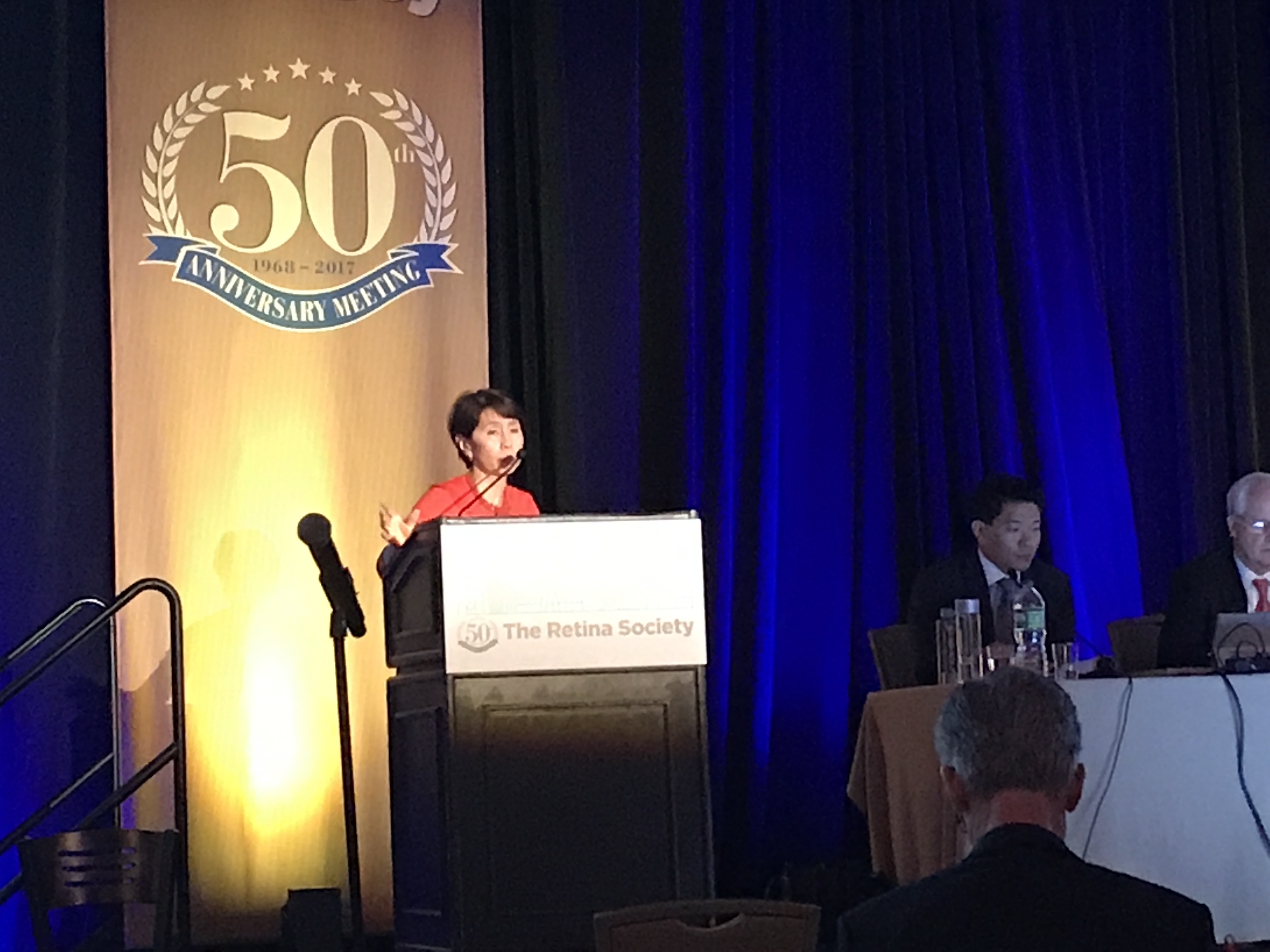 Christine Kay, MD informed us about the phase-2 study of ALK-001 in Stargardt disease (“TEASE” trial). The study investigates the effect of orally administered ALK-001, a molecularly modified form of Vitamin-A, which slows the vitamin’s propensity of dimerization, which is believed to be a major factor in Stargardt’s pathophysiology.  The study is currently ongoing and we are excited about upcoming results of this novel approach. Finally, Victor Gonzalez, MD conveyed results of the ORION study, which investigated Dexamethasone implant versus Ranibizumab for central retinal vein occlusion (CRVO). This was a multi-centered randomized clinical trial investigating dexamethasone implant alone, Ranibizumab alone or combination therapy. Outcomes were visual acuity at 24 weeks as well as reduction in central retinal thickness measured by OCT. Results showed that all three groups had equivalent primary outcomes, however number of injections and as such treatment burden was lowest in the dexamethasone only group. Tomorrow, we look forward to the final day of the Retina Society meeting in Boston filled with exciting talks on diabetic retinopathy and tumors.