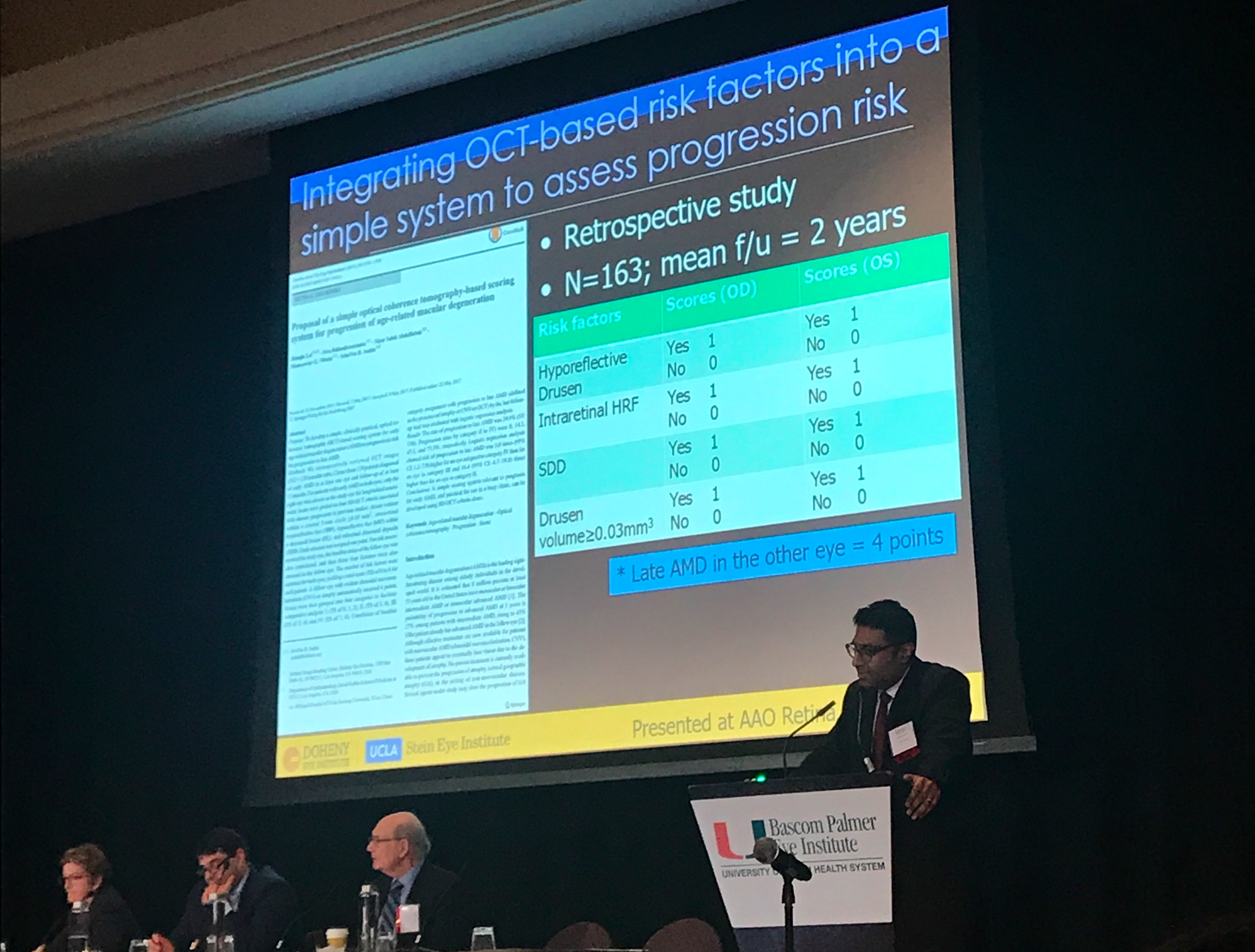 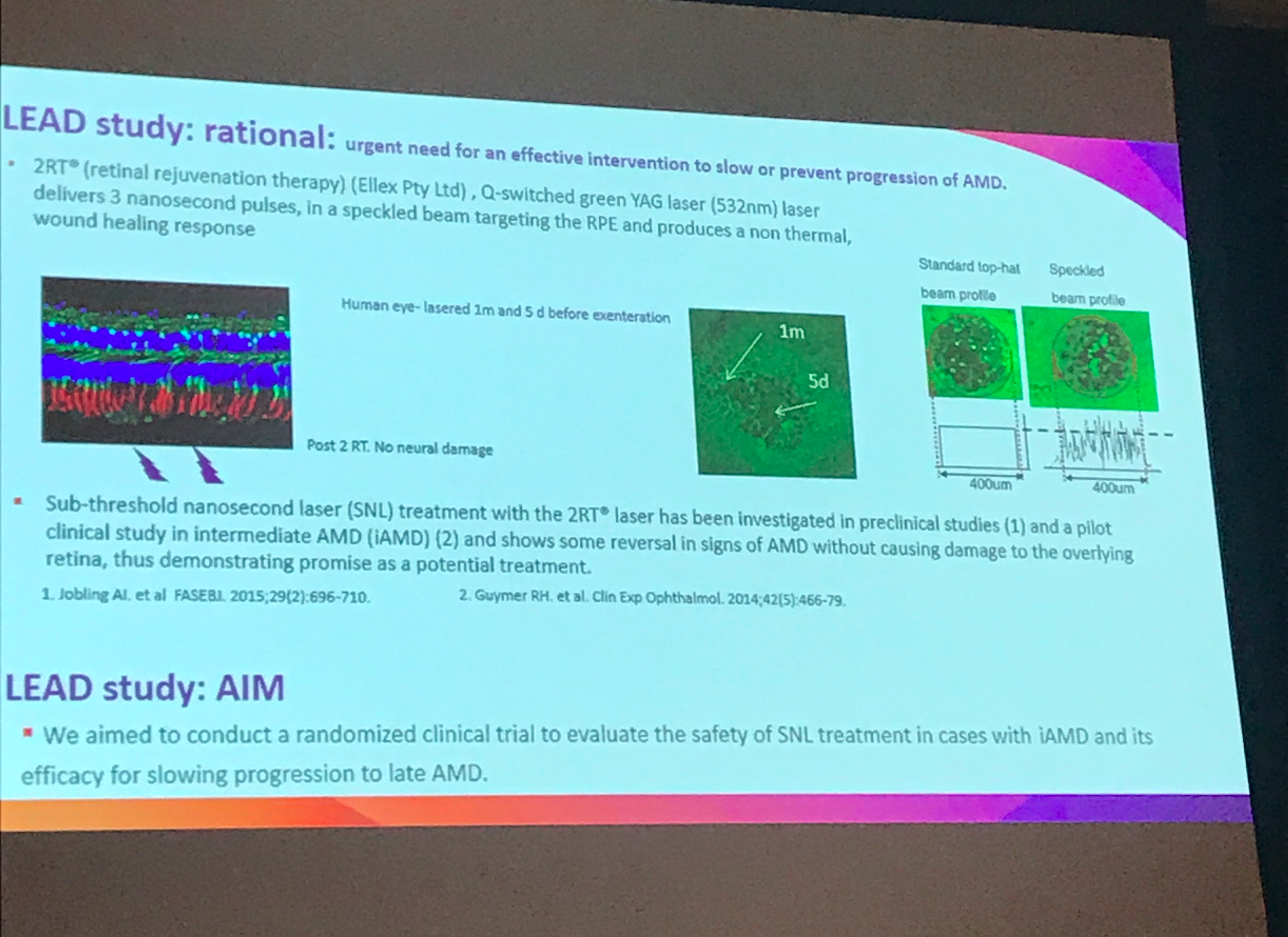 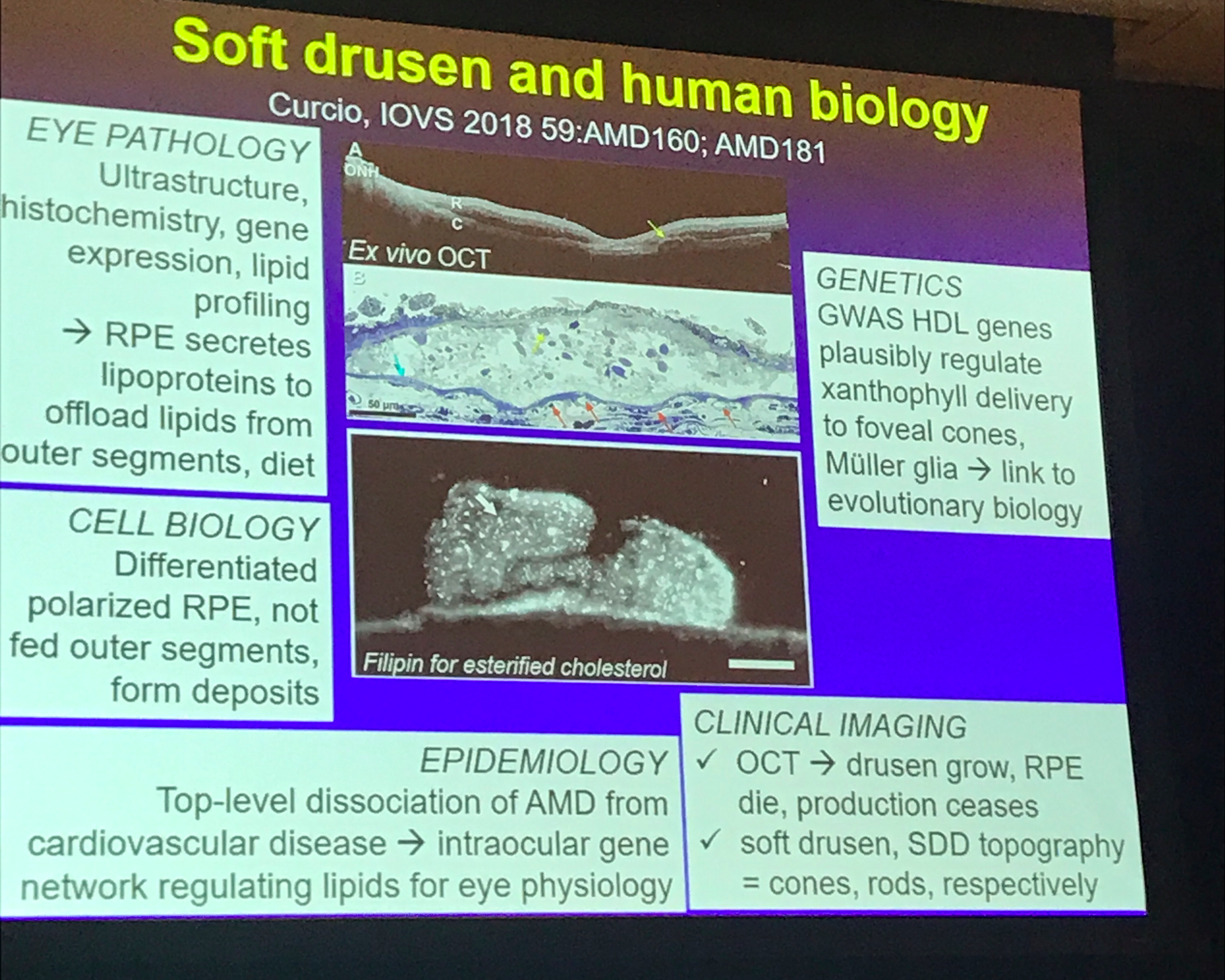 Dr. Robyn Guymer discussed the large multi-centered LEAD study, which showed that in patients with iAMD, progression to late AMD was not slowed by sub threshold nanosecond laser (SNL) treatment. In a post hoc effect modification analysis, however, SNL intervention was associated with delayed progression in patients without reticular pseudodrusen, while it was associated with more rapid progression in those with reticular pseudodrusen. 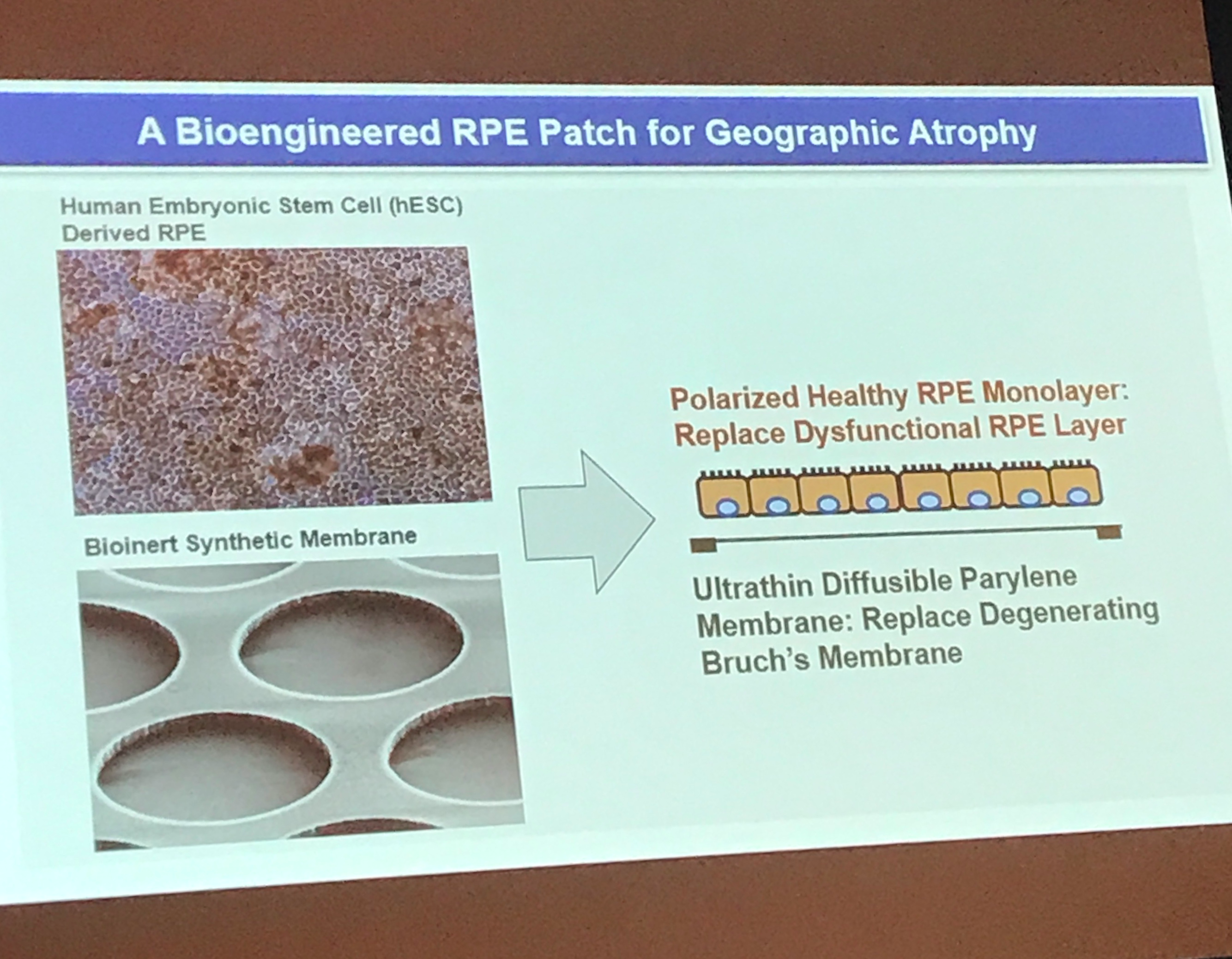 Dr. Christine A. Curcio then presented on the concept of “scavenging” Bruch’s membrane lipid as a therapeutic strategy in preventing progression of AMD. In her group’s proof of concept study with non-human primates, intra-vitreal apolipoprotein L-4F removed BrM lipid in treated and untreated fellow eyes. Next, Dr. Jayakrishna Ambati discussed the crucial role NLRP3 plays in Alu RNA’s toxicity to the RPE, which is caused by its activation of inflammasomes that lead to RPE death. His group found that modified NRTIs (kamuvidines) effectively block Alu RNA toxicity in mouse models, and in a retrospective analysis of a large population of HIV positive subjects, found that exposure to NRTIs was associated with less dry AMD. More work is being done to develop an injectable sustained release device utilizing these molecules. Dr. Elias Reichel then presented preliminary safety results from the ongoing TOGA study, which investigates the effect of doxycycline on rate of change in size of geographic atrophy lesions. The authors suggest a possible role for doxycycline in treating ARMD given the multiple pathways in which it modulates inflammation and cell death. 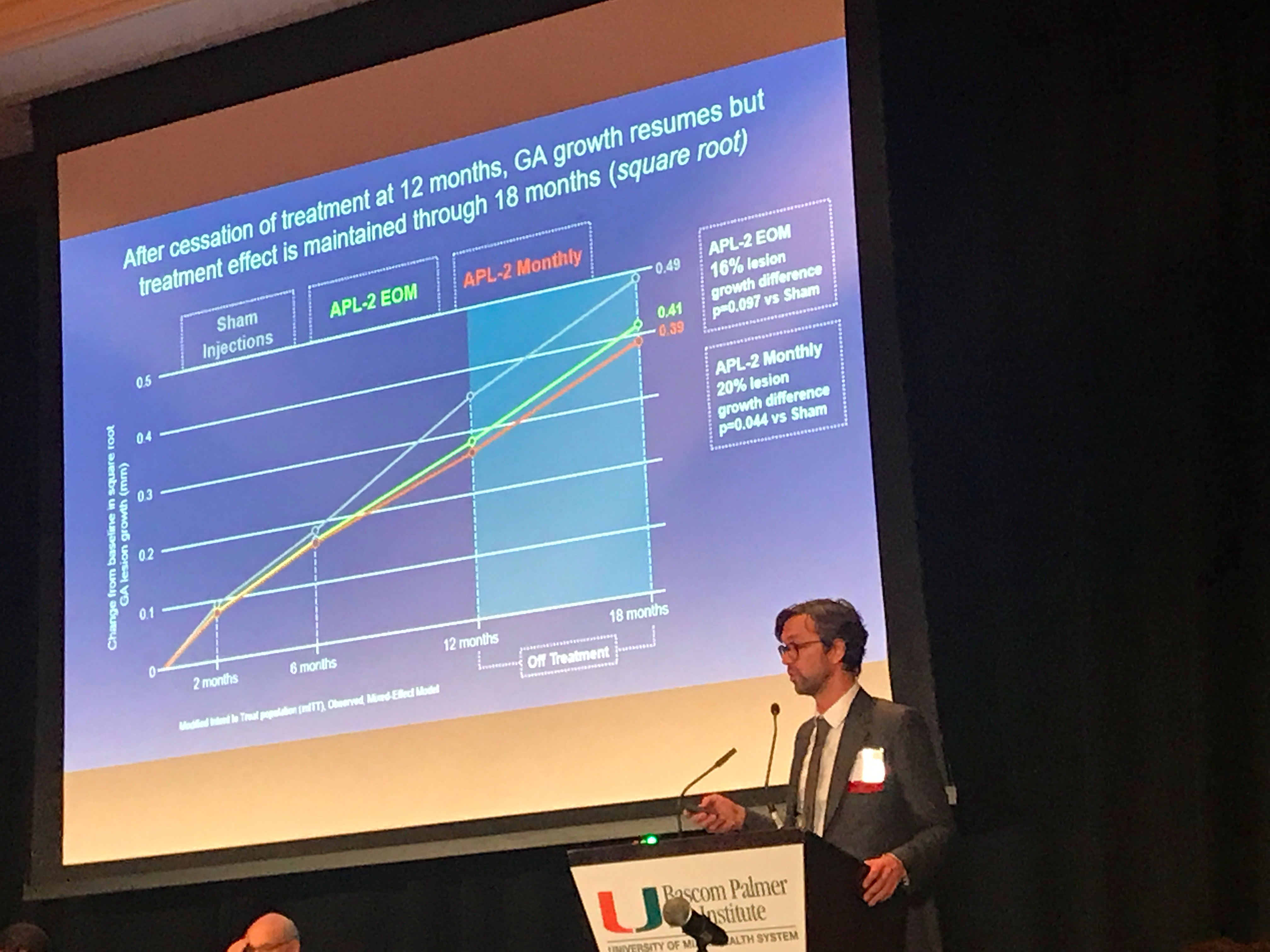 Dr. Amir H. Kashani from USC Roski Eye Institute presented data from an innovative study in which patients with geographic atrophy were treated with bioengineered RPE patches that were surgically implanted in the subretinal space. Published interim results from 5 patients support the safety of the procedure. Finally Dr. Cedric G. Francois discussed the findings from a Phase 2 trial which showed that APL-2 slowed the progression of geographic atrophy in 246 subjects over a 12-month study period, and that the treatment effect declined upon discontinuation of therapy. APL-2 inhibits C3, and thus all three pathways in the complement cascade. This is an exciting possible target for further study